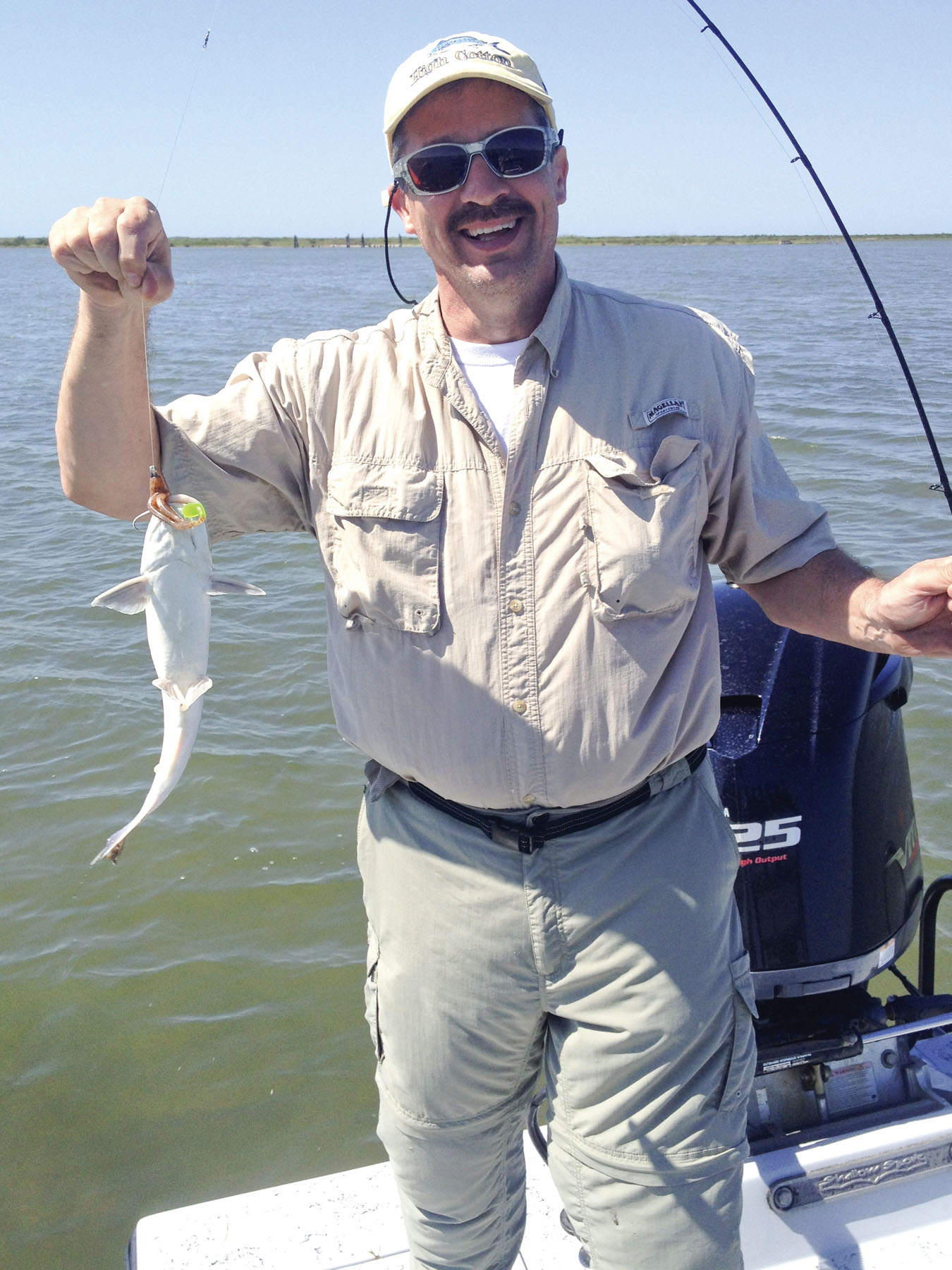 David Stauber shows that even hardheads love Bass Assassins!
Fishing in July has been a bit more "normal" than previous months, if that term might be applicable to anything we've seen so far in 2014. The water temps finally reached normal in July and just recently the wind has been giving us a break.

What this means is that we are finally getting into our summer patterns; fishing shallow early and slowly moving to deeper water following our speckled friends. Not sure yet whether the whole "moving deeper" thing we are seeing is a product of warming shoreline water once the sun is up or a natural reaction to angling pressure and boat traffic on the shorelines.

I have probably been as guilty as anyone about boating too shallow in years past, and now make a conscious effort to run a greater distance out away from the dropoffs If for no other reason than to dodge wade fishermen that insist on parking on the bank and then wading back out 200 or 300 yards.

The calming of the wind that has allowed normal summer patterns to evolve in the bays should continue into August and hopefully you will be seeing my Shallowsport in Pass Cavallo or the Big Jetty soon, headed to the Matagorda Island surf. You cannot beat the surf when the conditions are right and those Gulf trout and reds are certainly more aggressive than their bay cousins during Dog Days.

Topwater action in the surf can be as good as it gets. My favorite plugs out there have long been MirrOlure's He Dogs and She Dogs. In my experience the high-pitched "clacking" of these baits will draw significantly more trout strikes than just about anything you can throw. Over the last few years my preference between these two has drifted toward the smaller She Dog (easier on the wrists), but there are times when the larger profile and voice of the He Dog can make a difference.

The reason I am emphasizing the larger of the "Dogs" is based on an experience several days ago.

I pulled into a spot where we had been getting a good midday trout bite. Riding the trolling motor the last hundred yards or so, I was surprised to see very little bait activity in the guts along the shoreline as it had been earlier in the week. Only a few lazy mullet flops, none close together.

I had a feeling the trout should still be there but the lack of a specific target zone defined by bait activity was gnawing at my confidence.

So I coached my guys on the bait situation, saying it might still be worth a shot. One of them asked what to throw and I said the best locator lure might be a topwater, possibly dropping down with a plastic if they wouldn't hit it aggressively. Thirty minutes of nothing, I announced that I was going for the boat.

Wading back, I caught a glimpse of mullet activity way, way the heck offshore. I yelled back that I was going to wade that way, hoping I'd find the trout and not a school of jacks blasting those mullet.

As I got within casting distance, where I could tell there was a lot more mullet out there than I originally thought, I tied on a He Dog. More for casting distance than anything; two twitches and kaboom! A sleek twenty-two inch trout came to hand.

My guys had seen it and were already on their way. I yelled, "Topwater" and they all frantically switched over. Some were hooking up immediately as I had, but two were not. I asked one of them what he was throwing and he said, "Spook Jr." I yelled back "Bigger" and he switched to a full-sized, bone Super Spook. His first cast was crushed within seconds.

Lot to think about here; why those fish were more than two hundreds from the shoreline they'd been on all week. But then it came to me. Even that far off the bank, the water was about the same depth and temperature as the shoreline guts they'd been using and it was midday of Friday. No telling how many fishermen and how much boat traffic had already plowed that shoreline ahead of us.

I cannot think of a better example of learning something every day you're on the water and keeping your eyes on the ball every second of the game. Had I simply trudged forlornly to retrieve the boat, staring down and cursing my luck, I would have surely missed a great opportunity.
Fish hard, fish smart!