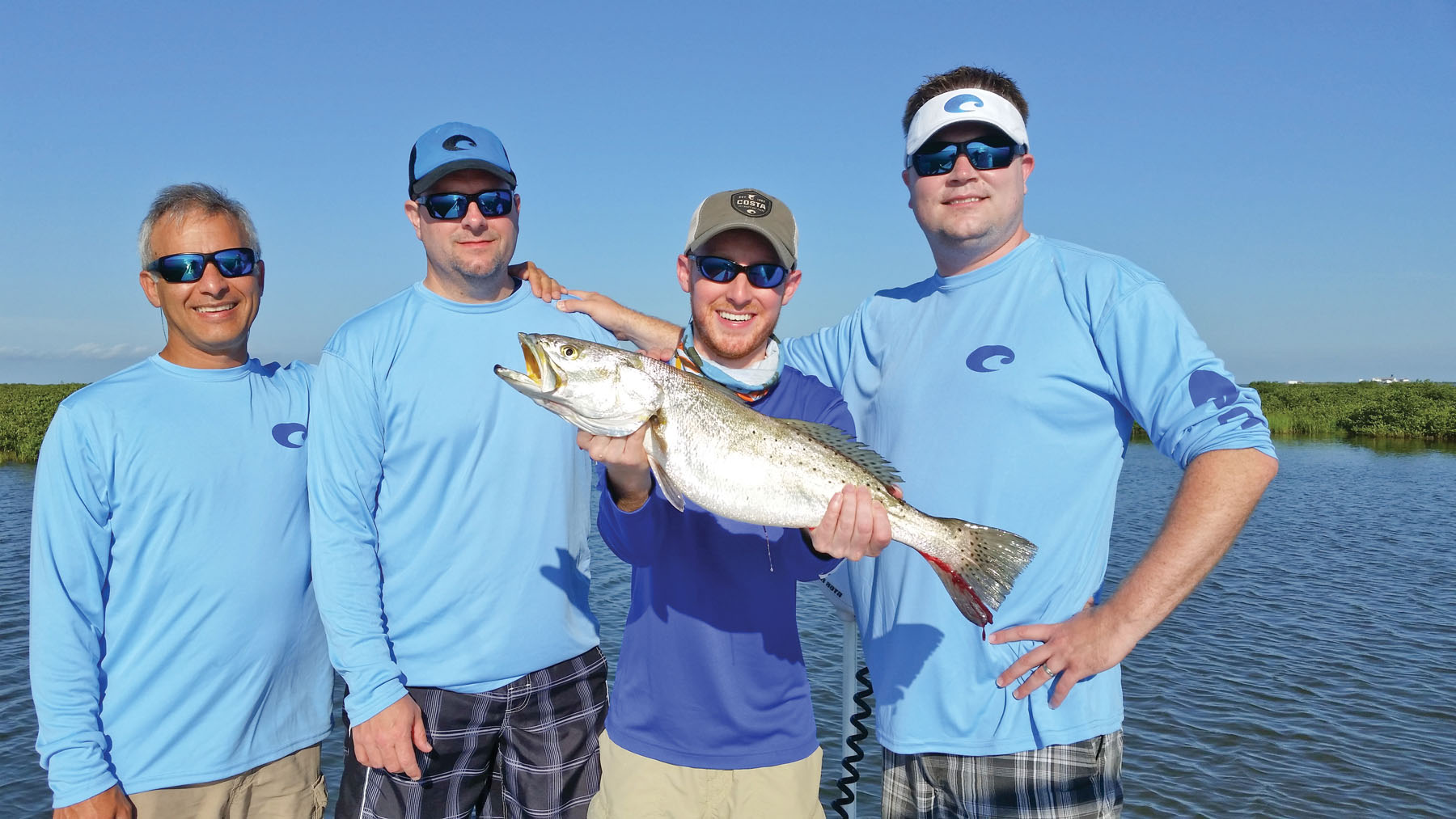 Costa Del Mar guys with their winning trout.
Mother Nature did it again! For the first half of 2015 we have received more than enough rain to take us out of a record-long drought. Originally the fresh water coming down the Guadalupe River seemed to stay on the north side of San Antonio Bay and would either run west or run east down the major channels, depending the direction of the prevailing wind. This left the southern half of San Antonio Bay holding close to normal salinity and very fishable for our speckled friends.

Then the upper reaches of the Guadalupe Basin began to experience rainfall in greater amount and the Guadalupe River rose to flood stage. The flood stage inflow continued until all of San Antonio, Espiritu Santo, Ayers and Mesquite Bays became almost entirely inundated, salinity fell to single digits in many areas, zero salinity in many. Yes, there were still a few salty pockets where you could catch trout and redfish on the south shorelines but it finally got so nasty looking that I started looking elsewhere for fish. It was more of a mental thing for me; I would rather fish in trout-green water than a mud hole. The fishing was starting to suffer for me and my clients in the muddy stuff.

I know that I started out with "Mother Nature did it again" but what I really meant by that statement was that she ended our long drought and now she was actually turning our fishing around, right in front of our eyes. The bays need a good fresh water flushing a lot more often than we get them. I have already noticed how much better our trout fishing is in the bays compared to the last 4 to 5 years or so. It is not uncommon to catch trout and reds at every stop we make during the day.

Where we ended up finding our best water and best action has been in West Matagorda Bay. This bay system is usually a go-to area for me this time of year anyway, because of the deep water located right off the ship channel spoils. This area will hold cooler water and lots of current to attract and hold baitfish, which in turn holds lots of speckled trout.

West Matagorda's renowned Hump also holds deep water within casting range of the wader working the sand drop-offs and also will have a lot of current movement. Just keep an eye out for the man in the gray suit!

The south and the north shorelines between Pass Cavallo and the big jetties have also been go-to spots for the Rat Pack working the sandbars in close to the shoreline. By the time the sun gets well-up we are waist-deep in guts between sandbars.

Last but definitely not least we have the surf. There were days in early-June that it flattened out enough to get out there but I had just had knee surgery and missed those opportunities. It will calm down again and I will try to be the first one out of the pass on those days when it does.

For August, the fishing areas and the methods we are currently using in July shouldn't change. We will be starting off shallow throwing She Dogs in bone or black back-chrome sides. Sound and action seem to make more of a difference than color when throwing topwaters–remember that.

When the topwater bite slows I will be switching to either a 4" Bass Assassin Sea Shad in copperhead or green moon, both very natural-looking baits. My other go-to bait is the 5" Bass Assassin Vapor Shad. The colors I prefer for the Vapor Shad are green moon and hot chicken. The Vapor Shad should be worked like any other jerkbait, with lots of twitches to make it dart and dive. The big difference with the Vapor Shad is that it seems more buoyant than the older rat tail jerk shads. This allows you to work it slower as it stays in the target zone longer.

Last but not least, when I am able to get to the surf and we have our trout, with my ShallowSport X3 I am able to point it towards the nearshore rigs or hit weedlines out in the Gulf for some ling and dorado. Even better, we can run until we spot one of the large schools of tarpon that inhabit the nearshore Gulf waters. The ShallowSport X3 has definitely made my job easier, no matter what the weather brings.