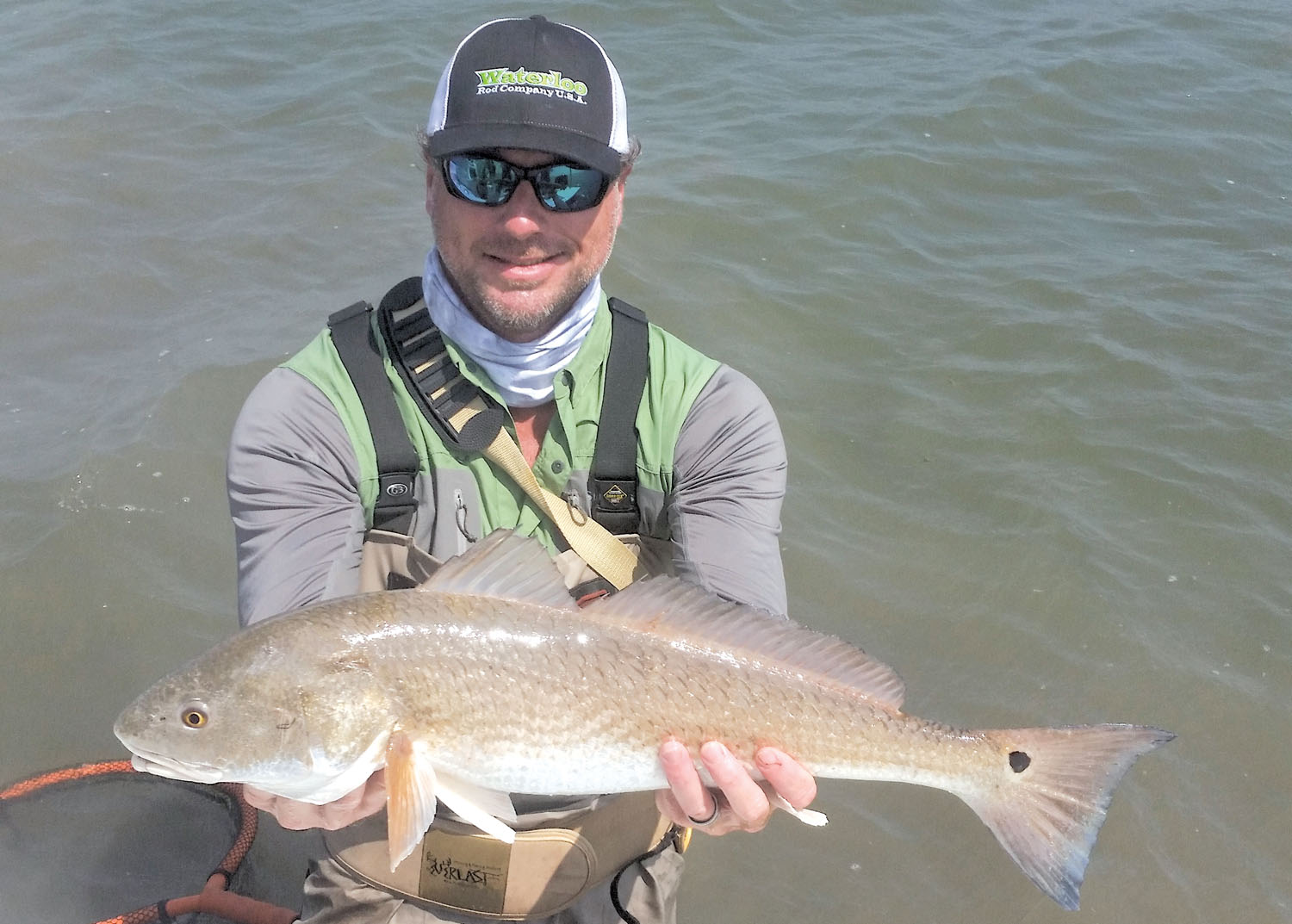 It is almost mid-July and I just got in from what I would call an easy trip to West Matagorda Bay. I say easy, meaning everything went as planned, or did it?

Normally by mid-July we are headed straight out Pass Cavallo or the Port O'Connor big jetties and running the surf until we see signs of fish bait, birds, or both. But as my buddy David Denbow would say, "Not today, round eye!" A high pressure system is parked over Texas and for five days we have been battered by strong wind.

Sitting on the couch sipping coffee this morning, I began sifting a mental checklist to decide my game plan for the day. This has become standard procedure, waiting to see weather developments that may have occurred through the night, you simply cannot trust a weatherman nowadays. The wind at 3:30 AM was sustained at 18 and gusting to 27, just like I thought it would be.

With our gear stowed we headed through POC's little jetty, planning to fish the protected south shoreline of West Matty. We have been finding quality trout in the many guts that parallel that shore. Lucky that I run a Shallow Sport X3 because we were running through some pretty sloppy chop created by the southwesterly wind. The X3 still amazes me how it doesn't pound in such conditions. The hull just somehow soaks up whatever Mother Nature can throw at it.

Arriving at the spot I wanted to fish I noticed the water color had changed from previous visits but the clarity was still decent. A good 45 minutes into our wade produced a pair of solid 3-pound trout but, I just wasn't feeling it. The bait was not active enough and it was really choppy wading from sand bar to sand bar. The waves were beating on us like a rough day in the surf. I told the guys and the little lady with them that I would get the boat and pick them up.

Lesson 1: Always pay attention to your surroundings. Walking to the boat I noticed a lot of mullet jumping closer to the shoreline. The first gut there is unusual in that it runs waist to armpit in depth with a sticky bottom. I picked the group up and upon receiving the news of my discovery they were gung ho to try it.

Pulling up at the bar, we hopped out and headed for the Promised Land. One of the guys hooked another 3 right where the bar ends and mud starts. We kept heading downwind and I just happened to look back after many empty casts and noticed the mullet were still acting scared behind us, so I headed into the wind to check it out. Once I got within casting distance of the skittish bait I started getting bites and started catching an occasional nice trout and a lot of acceptable trout. I thought to myself there must be a large school of fish hanging around next to this sand bar.

Lesson 2: Share the wealth. I could have stayed there and caught fish for a long time but I had guys that wanted to catch fish and I don't need the practice. My new plan would be to load everyone back up, take them farther upwind, and begin again. Perhaps the third time really is the charm. Within minutes we were on quality trout, steadily hooking up and several double-ups. I am lucky to have clients that trust my judgment. A crew that didn't know me probably wouldn't have been as eager.

When a commercial crabber worked in a little too close and the fish shut down, I loaded them up and headed to a very similar bar and gut structure a short distance away and we walked right into a duplicate bite. They ended with limits of nice trout.

Lesson 3: This is what bass fishermen call a pattern or patterning the fish. As a guide I try to decipher what the pattern of the day is but it is something you as an individual angler should also incorporate into your daily game plan.

You might be wondering what the secret lure of the day was. Well, I hate that it was not really all that secret. I started the day using a 5" Bass Assassin Saltwater Shad but was getting too many short strikes, so I switched to the 4" Sea Shad and that sealed the deal. I had one guy throwing a red-white paddletail.

Looks as though I will be running this same game plan as long as the wind continues. But, if the wind ever gives us a break, look for me to be pointing the bow of the X3 toward the surf or offshore, every opportunity I get.