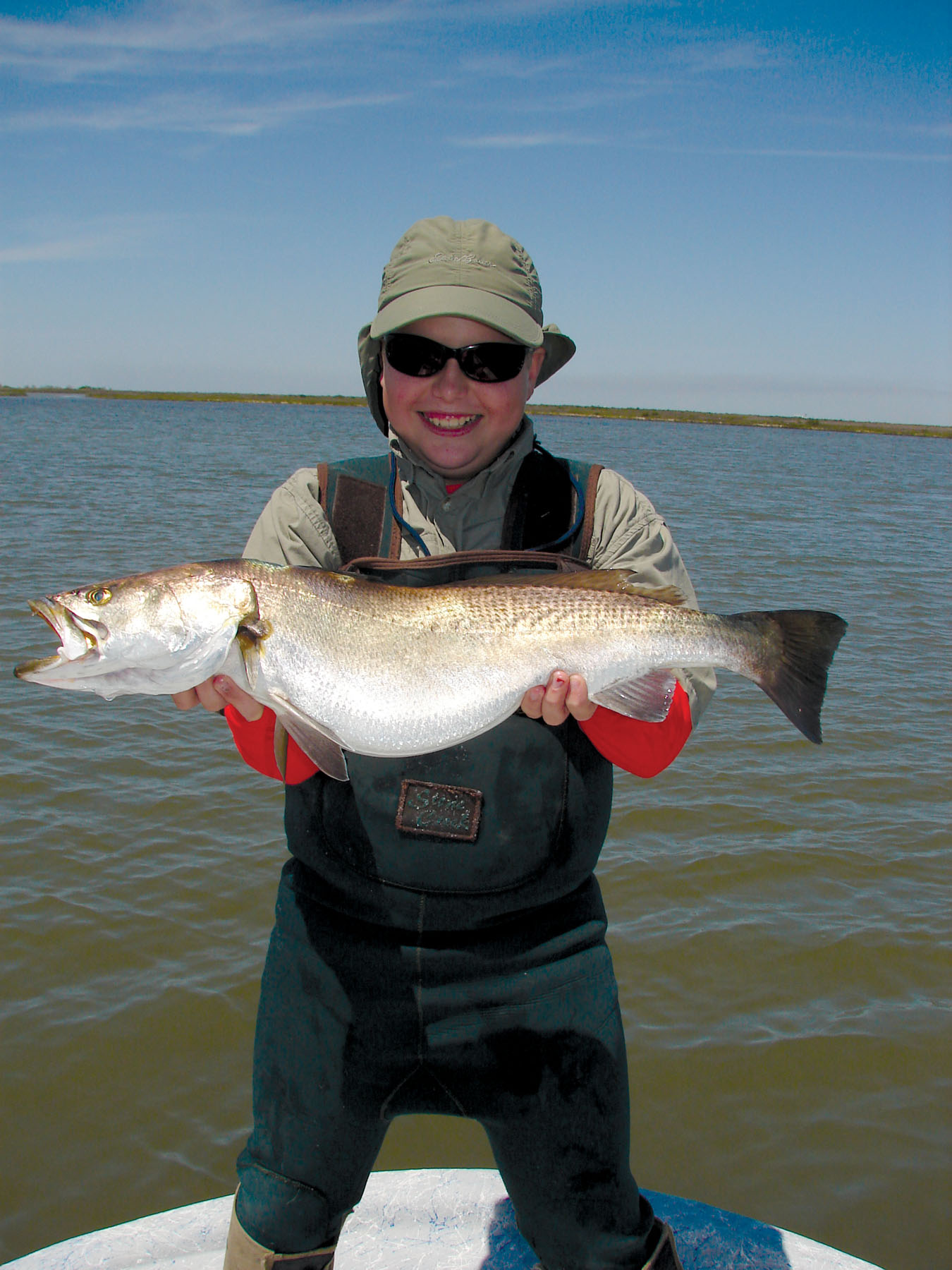 This youngster was extremely proud of his trout.
The fishing in San Antonio Bay and the marsh lakes on Matagorda Island has been red hot for redfish. The trout fishing, on the other hand, has taken a backseat to the bronze brutes on my boat for the time being, but hopefully that will be changing soon.

Late October and November showed a substantial change in the trout fishery for the Port O' Connor/ Seadrift areas. Freshwater runoff from local rains and inflow from the Guadalupe has made the San Antonio reefs a little more favorable for my speckled friends who have been hiding in the northern regions of the bay system and the upper reaches of the Victoria Barge Canal. Sure we have all heard of magnificent catches and limits from some internet reports, but to truly say the fishing was normal would be a typical internet report. It is not normal yet, I have yet to find a pattern for my speckled friends that will work day in and day out.

I have had some days that no matter what you did you could do no wrong, trout jumping all over our lures, and then you come back a day or two later to wonder if there are any trout in our bay system. The common denominators in any and all of my good trips this fall has been; you have to be on shell, you must have finger mullet present, and you have to be on the north end of San Antonio Bay.

I will do something I try to never do in my reports and that is to mention names of reefs I have concentrated my efforts on in the past month. These reefs are not guaranteed hot spots but the list will give you a place to start. Now please also remember that I fish a lot of shell reefs that have no names and are not on your new-fangled GPS maps, they were found by time on the water and by my time on the back of my dad's oyster boat. My dad would drop the dredge over in the middle of nowhere and bring up shell from parts of San Antonio Bay that I thought only had mud bottom. I would memorize these reefs with reference points and come back that afternoon or the next day I had off and check the reef for fish. Some paid off right away and some of them saved my trips in later years.

I have been throwing the five inch Saltwater Assassin in the more natural colors such as, Baby Bass, Bone Diamond and Opening Night. I rig these lures on a 1/16 oz Assassin jighead. If the fish seem to be finicky or seem to want a little more bottom action I will slip on a four inch Sea Shad in the same colors and probe the bottom a little more slowly and let the swimming tail do most of the work for me. Remember if you do not hang the shell occasionally you are working the lure too fast.

I would like to mention something I've written about many times that seems to be almost universally misunderstood. Please listen carefully, when wading the shell reefs for trout, make sure you do not walk into the fish. I see it happen all the time; someone hooks up and the next thing you know one of the guys thinks he needs to move forward to get in on the action. Before you know it he standing where you just hooked that fish and before long the bite shuts down. When you hook up, stop and fish the area thoroughly. Stepping toward the bite is the last thing to do if you want to get bit again!

In closing remember that it is duck season, be courteous and stay clear of decoy spreads. Most hunters will be packed up and gone by mid-morning and you can fish that area then, or just find another section of water to fish.