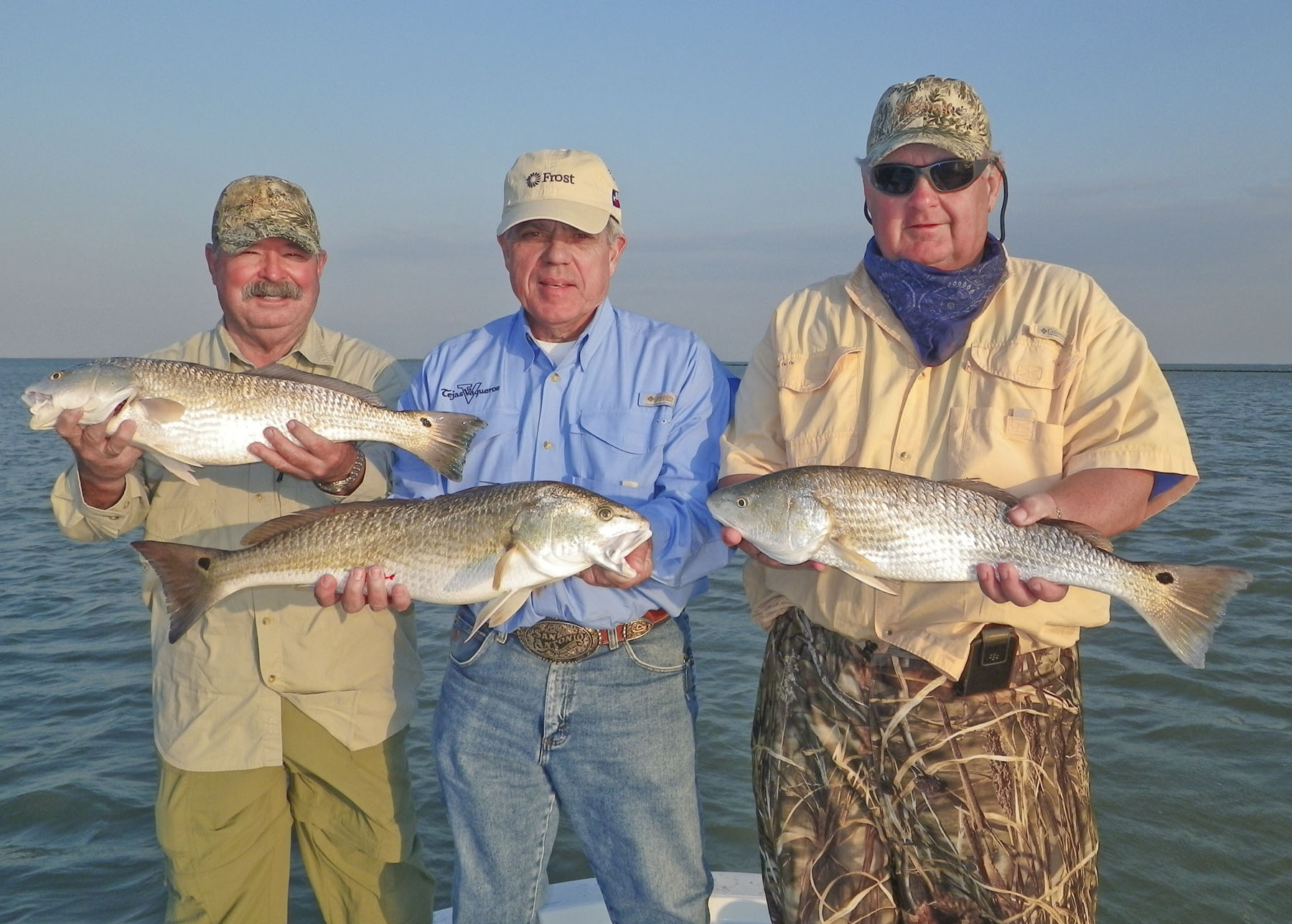 A happy crew with San Antonio Bay reds.
Excellent fishing reports are circulating all along the Texas coast and the POC-Seadrift area has turned on as well. During November I have fished birds in upper San Antonio Bay, waded north and south shorelines in San Antonio and Espiritu Santo, waded and drifted SAB and Mesquite Bay reefs, as well as waded and drifted many Matagorda Island back lakes. We are fortunate to have such a range of fishing opportunity on this part of the coast.

Quite often when I've had a good day someone at the dock will ask, "Where did you find them?" While I would like to be more helpful I do not normally say, "Oh yeah just go to such and such reef and cast toward the PVC pole off the north end. You'll have a limit in no time." A more likely response would be for them to try the deeper edges and points of the mid-bay reefs or maybe to work waist-deep grassbeds on the south shoreline if that's where I've been.

I don't want to be ugly or snobbish but I am usually pretty tight-lipped about my fishing areas. It has taken me a lifetime of trial and error to learn structure that holds fish under various conditions, and I'll be danged if I will just blurt out everything I know to anybody that walks up. I will however give you a good hint for a start.

What some folks fail to realize is that a guide's day actually begins the day before. Planning is the biggest part of success and this includes researching fishing logs, checking the weather, and reading the tide tables especially if the area I'm fishing is tide/current dependent. To be honest, after doing my research, I actually find it easier to mentally eliminate possible fishing areas rather than trying to identify some I might fish. So when you see me returning to the dock in the afternoon; I'm already planning where I'll be fishing tomorrow, and probably more exhausted mentally than physically.

Let's take a more in-depth look at how to plan tomorrow's fishing trip. First thing to consider is whether the fish will remain in the areas we found them in today. This means the weather (especially wind), predominant currents and water levels, must remain similar. A change in wind direction can totally wreck a fishing spot. North wind can drain a backwater area on the north side of the bay and totally inundate a similar area on the south side. A switch from light southeast to southwest can put the kibosh on a mid-bay reef. Tides change from day to day and weather (wind) can increase the tide and current or even cancel it entirely. If the fish we caught today were tide/current dependent, meaning they fed in the current, we'll need a similar current tomorrow. This is what I meant when I mentioned mentally eliminating certain areas.

Another factor to consider is boat traffic. A spot that fishes well on a weekday may not produce worth a hoot on Saturday. Likewise, boat traffic can sometimes help. Just recently we were able to catch some exceptional trout and very healthy reds in an area that is traditionally almost too clear and too shallow. These fish had been in this area for several weeks but I hadn't fished it because I did not believe we could catch them. Well, along comes a strong north wind and I find myself locked down and unable to fish the areas I had been working. I told my guys we would try the shallow area but stealth would be the key. Moving very slowly through ankle deep mud (not so quietly) the fish moved constantly ahead out of range. I was about to go back for the boat when another boat came running the edge of the flat we were on. Guess what he pushed the fish back toward us and the guys began hooking up left and right. This same scenario can work for you and against you and can be created by a crabber checking his traps or even by other waders pushing fish around a shoreline because they are making too much noise. I see all the above, good and bad, happen regularly.

I have ordered a 2011 24-ft Shallow Sport which means the 24-ft 2010 model I'm currently running will be for sale soon. Email or call for details if you are interested in a great boat at a great price.