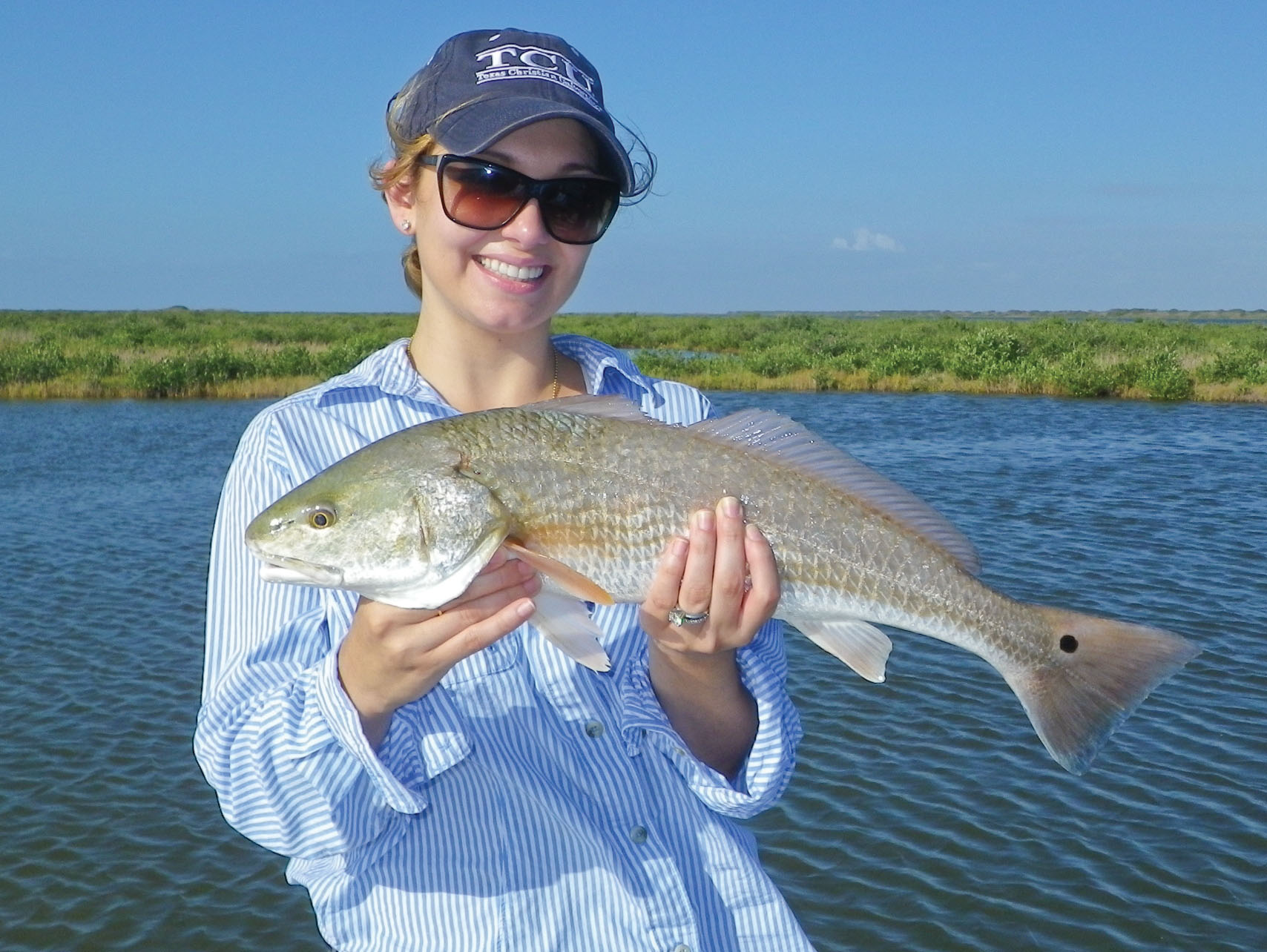 Leslie Gossett with her first ever redfish caught in San Antonio Bay.

Is it just me or did this year fly by quicker than normal? Looking back, 2011 has been a pretty wild ride for our local fisheries. First we had the freezes this past winter along with a nasty lingering drought situation that may be with us a while longer if the weather guys can be believed. As if that wasn't enough we were hit by the red tide algae bloom in early October. It really is amazing that after all its been through our fishery is still strong and producing here in the middle coast.

During November I spent the majority of my time either wading or drifting the mid bay reefs in San Antonio Bay. We would have to vacate the open bay waters when a cold front came through but within a day or two the water was cleared up and the bite from the many hungry speckled trout was back in full swing.

If we were in the redfish mood all we would have to do is hit a shoreline along Matagorda Island and fish one of the many drains that were holding mullet or any other kind of bait. During November the red tide caused a lot of our quarry to leave the Lagoon and Shoalwater Bay area and we saw disappointing numbers of dead flounder and redfish along with countless baitfish. Hopefully this algal bloom will end soon.

My game plan will change somewhat in December, still in San Antonio Bay, but shifting destinations from the mid bay reefs to the south shoreline. My plan will be to focus on the many sloughs along the south shoreline that connect the bait rich backwaters inside Matagorda Island with the main body of the bay. I like to start my wades several hundred yards upwind of a chosen slough and fish slowly and carefully toward it. The bottom along this shoreline has a series of guts and bars that run parallel to the shoreline. These guts get progressively deeper moving offshore and quite often there will be one of two of them holding most of the bait in the area. Naturally, the gamefish will be there too. Once I reach the slough itself, depending the bottom conditions, I sometimes wade up them or along them. When the current and water conditions are favorable these sloughs can be full of feeding fish.

My lure choice usually varies as the day progresses. Early morning, especially if it was very cold during the night and the baitfish are mostly subsurface and moving pretty slow, I will start out using my new favorite lure, the Bass Assassin Die Dapper. You can rig this lure weedless or with a light jighead. I have been running it both ways and catching lots of fish. If the area I'm fishing is not too grassy I will rig the Die Dapper on a 1/16 ounce Assassin jighead #05001. My color choices for the Die Dapper are Sand Trout and Chartreuse Dog. These lures are injected with the BANG fish attractant and the scent seems to make leery fish go ahead and bite.

If the night time temperatures were on the mild side and the baitfish are on the surface jumping and splashing, I will have no problem tying on a MirrOlure She Dog in the CHPR (chartreuse back & belly, orange throat and pearl sides) or the GCRCH (chartreuse back, gold chrome belly, orange throat). I will let the fish dictate how fast or how many pauses will be needed.

I would like to use a few lines here to remind everyone to practice good boating etiquette. Shellie and I have had a couple incidents with airboaters hugging shorelines and not swinging wide enough as they go around our groups of wade fishermen. I began running air boats in 1981 and if I drove my airboat all these years as close to people wade and drift fishing as some of these guys have been doing lately I probably wouldn't be here now. It seems all the rules of boating etiquette are being forgotten. I am just wondering what some of these people are really thinking. I always tell people to be on the watch for decoy spreads and give the hunters a wide berth, just like you would want them to do when you are fishing. If you want to fish the area they are hunting, just be patient. They will probably leave around mid-morning and you can go back and have it all to yourself.