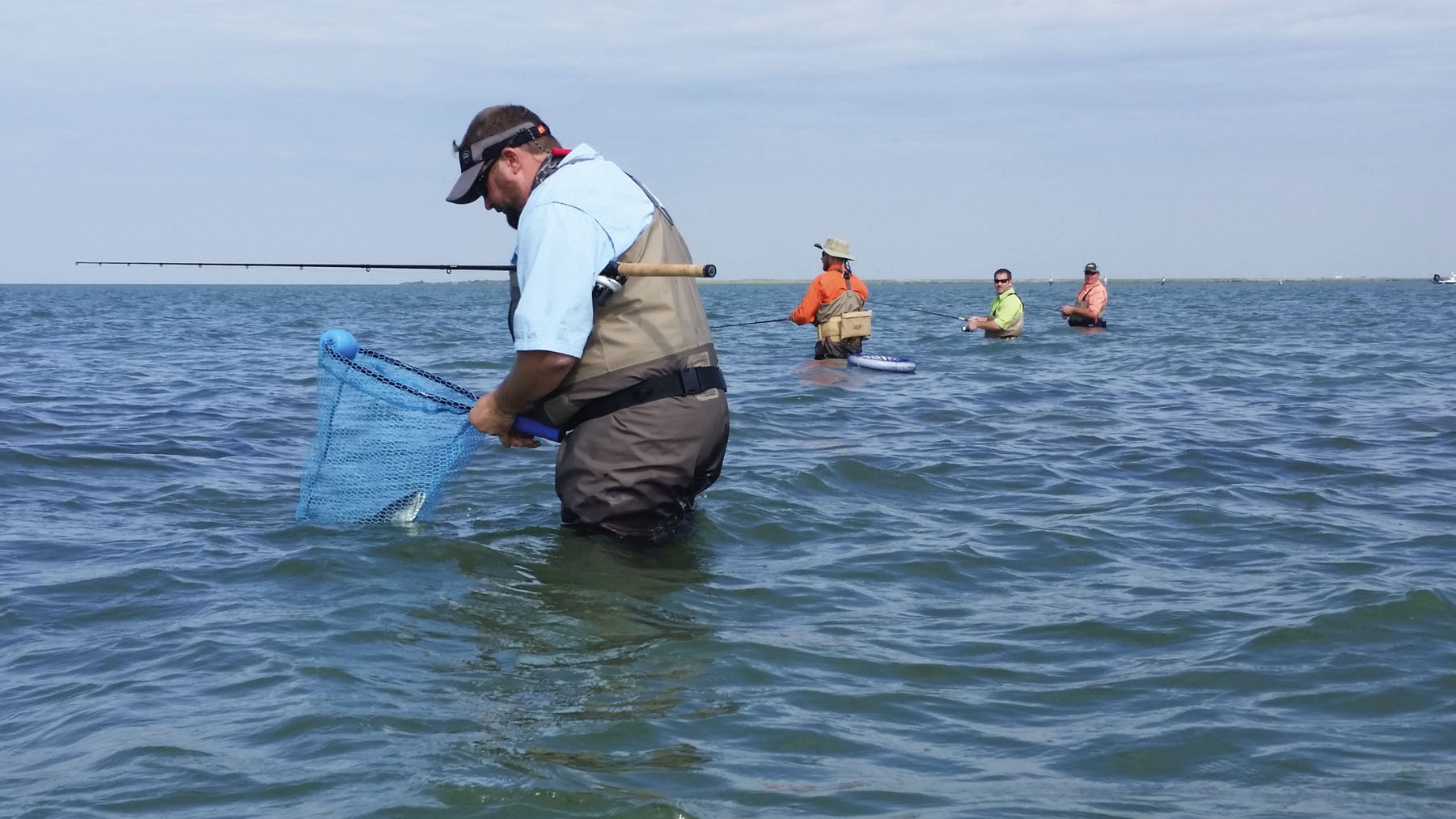 Ryan Overholt from Oklahoma nets a nice trout he dredged up on a San Antonio Bay reef, fellow Okies look on.
I had planned on spending more days along the Gulf beach and nearshore waters out of Pass Cavallo during the fall months. Blame it on San Antonio Bay. I got into some trout action that reminded me of the good old days. I am not going to say it was the trout limit change or Cedar Bayou dredging, it's way too soon for either of those, although both will no doubt help in the long run.

I give credit to one the finest runs of excellent weather and fishing conditions I have seen in quite a few years. The major feed occurred almost daily from early to mid-morning. We were in the fish on the shell and everything was in our favor at just the right time. Something about wading shell and catching quality trout on soft plastics kept me going back for more.

In late October Shellie and I had the pleasure of wade fishing the shell with a group of eight guys from Oklahoma. This was the third year these guys have been coming down and it is the first time the weather gods have shined on them. They always fish for three days, wading with artificials, and they are very hardcore. The first two years were very miserable and cold and the guys figured out very quickly that you do not scrimp when it comes to buying waders. During their first annual trip, which involved a cold front blowing through the middle coast and leaving the temps hanging around the mid-forties for the three days, we fished with gusty north wind and it made them think they drove north leaving Oklahoma instead of south to Texas.

During those first two years with all the bad weather, we always managed to catch a lot of fish and they were always of good quality. Mostly because the guys did whatever we asked them to do. If we told them we were going to wade a windblown cove and we all casted to this certain section of structure while trudging through calf deep mud, all we ever heard from them was, "Okay, let's do it." They never complained; they knew they had been dealt a dirty weather hand and they choked it down and kept plugging.

I have quite a few customers who will suck it up when the going gets tough but the majority of young anglers we run into nowadays are of the instant gratification type. They are willing to rough it for a wade or maybe half a wade, then turn to me and say, "I thought you said there were fish here." Okay, I got off track on that.

So we had some good anglers that only got to saltwater fish once a year and they only wade when they come here. But the weather gods really shined on them this year and we caught lots of fish. And, by the way, these guys only get to fish three days a year for speckled trout and they didn't have a problem with the new five fish limit. They all agreed that is plenty.

The number one thing I look for during the fall into the winter months is no different than any other time of the year–bait! What I have been keying on mostly is rafts of finger mullet hanging right on top of the reefs. Every reef we fished that had these rafts of mullet also held schools of trout and a scattering of redfish. The past few weeks we have been doing better on the shallower reefs, meaning those with exposed shell. It helps when the reef has a hook or cove in it and the wind is pushing water into it. Of course we have our favorite reefs, and spots along them, but paying careful attention to where fish are caught will help tremendously in putting the pattern together.

Let's talk lures. You can throw whatever you want when you go with me. But if you ask me what to throw this time of year I will tell you a 4" Bass Assassin Sea Shad–period. And when you ask which color, again I will say throw what you like; I stick to some basic colors. I will always have the Hot Chicken, Slammin' Chicken and my personal go-to, the Copperhead.

I rig these on 1/16 ounce Bass Assassin jigheads. We have been doing the best working near bottom, practically dredging with them. We will more than likely fish the same baits and use the same dredging method throughout the winter.