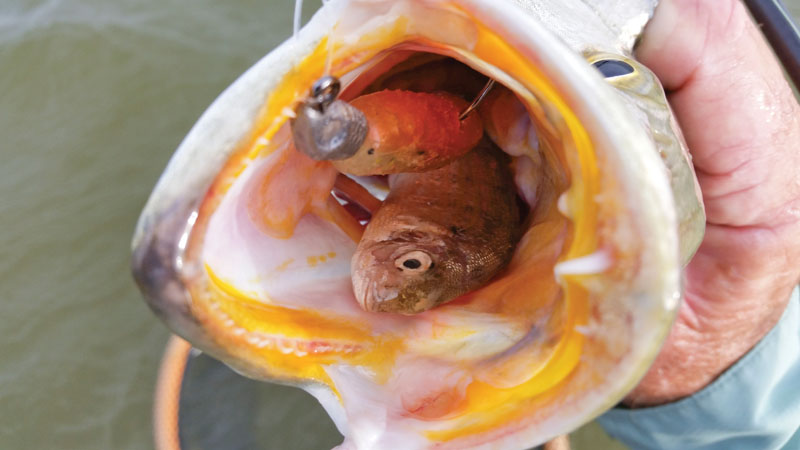 Match the hatch! Look closely and you will see a copperhead 4" Bass Assassin Sea Shad and a real shad in a hungry trout's mouth.

Here we go again folks. Mother Nature has just thrown us another of her wicked curve balls.

-Point the bow of my Shallow Sport X3 towards San Antonio Bay and stop on a bait-laden reef. Catch trout on just about any lure you want to throw. Load back up in said Shallow Sport and head to another reef. Repeat as needed!

Trouble with Mother Nature's curves is that we have no idea of the full impact when we first see them coming. The fishing strategy described above could still play out if the fresh water runoff from recent flooding in the middle and upper parts of the Guadalupe Basin moves through the bay system quickly.

For the better part of October and part of November I have been changing up my normal routine. I have been spending more time than normal in West Matagorda. The reason was not the fresh water coming to San Antonio Bay but mostly because of the average size of trout I had been catching there.

After many trips of scratching out so-so fish on the reefs in San Antonio I decided I would take my customers to West Matagorda for some shoreline reconnaissance. After our first wade I was convinced I wouldn't leave this bay until Old Man Winter's north wind drove me out.

The quality and quantity of the trout we were catching was that good, and it really didn't matter if you were a topwater chunker or a soft plastics guy. We all caught fish. Now granted, this is only going to last so long but as of this writing I am still fishing West Matagorda when I have a wade fishing trip. As far as staying in the boat, you had better point your boat towards many of the backwater lakes off of either San Antonio Bay or Espiritu Santo Bay as they offer far better drifting opportunity.

In December, no matter the location, whether it be San Antonio, Espiritu Santo or West Matagorda, we will be chunking the same baits based on whatever the weather scenario is.

If we are still wading shorelines we will be chunking the 4" Bass Assassin Sea Shads in Copperhead and Slammin Chicken. I rig these on 1/16 ounce Assassin jigheads. If we are throwing topwaters you can bet we will be throwing the MirrOlure She Dog in CHPR (chartreuse back and belly, orange throat, pearl sides) or the GCRCH (chartreuse back, gold-chrome belly, orange throat). I will let the fish dictate how fast or slow to work it or if I need to pause between twitches.

If the weather allows us to get on the reefs in San Antonio Bay we will be using the same Bass Assassin 4" Sea Shads in Slammin Chicken and Copperhead.

If we have an extreme cold front that drops the water temps into the high-40s you will see me breaking out the Corkys and the MirrOlure MirrOdines. We will fish these in the deeper areas of the back lakes and especially in the sloughs that connect the lakes to the bays.

Once the sun warms the backwater flats the bait and the gamefish should move out of the deeper areas and you should be able to target them with the same slowly-worked Corkys and MirrOdines there.

If there is any one piece of equipment that is going to make a difference in you catching fish in the colder months it is likely going to be the rod you are fishing with. I choose Waterloo because they are the most sensitive rod I have ever used–period. No matter if you fish with braided line, fluorocarbon or monofilament, you need to have a good quality rod in your hands that transmits every little tick of a cold-water trout taking your bait in its mouth. Swing by Waterloo's new Pro Shop in Victoria and talk to Jimmy or Carson, they can help you pick out a rod for whatever type of lure or bait you will be chunking. Might be a good idea to let Santa know which Waterloo is your favorite!