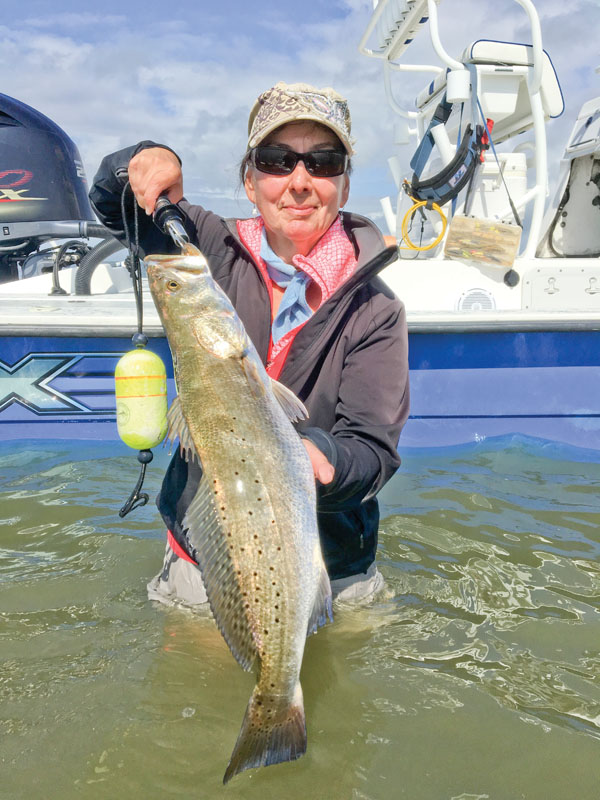 Currently, our water temperatures are hovering near 80 and this time last year we were seeing mid-60s to an occasional high of 70. This tells me that Mother Nature is running close to a month behind and November's conditions and patterns are likely to continue well into December. Here are some snippets of recent November charters to provide some idea of what might lie ahead.

We were fishing the group, Shellie and I call the Oklahoma Boys. They make a long trek to fish saltwater once a year in November and are notable for their determination, optimism and willingness to follow instructions, especially when fishing an area slowly and thoroughly. Shellie and I feel privileged that they choose to fish with us year after year.

They showed up right on time and we got their gear aboard the Shallow Sports and idled from the dock in pre-dawn darkness. Fifteen miles down the bay I slowed to idle speed well off the bank in five-feet of water, scanning toward shore for mullet schools I'd been targeting. The weather was pleasant and the guys were happy that we did not need waders first time in six years!

Finally seeing a mullet jump near the bank, I said, "That's all we need to see guys. Let's go!"

We covered the game plan while Shellie did the same about 400 yards away. We have been starting waist-deep and wading toward shore until we start getting bites. At this point we hold the line, barely inching forward. In addition to mullet, we have also been keying on slicks during solunar feed periods, which by the way, have been spot-on. I make a cellphone photo of the solunar table in this magazine so that I always have it with me.

We were throwing 4" Bass Assassin Sea Shad paddletails in mama's chicken and copperhead, although color didn't seem to matter as much as the retrieve. We tried straight-tail 5" Saltwater Shads but the strikes on paddletails were more numerous. When the action slowed or the mullet moved off, we loaded up and motored along until another bait school could be located.

We had our all-time best day with the Oklahoma Boys, both boats finding limits of reds and trout, with a few bonus flounder. We fished them the next two days with continued excellent results. Two things really stood out all three days relocating as necessary to stay on mullet schools and anglers remaining focused and following game plan to the letter.

The next trip was with Joel and Chantal Piefer who are interested in buying a Shallow Sport X3 and booking with guides who run them to gain knowledge. They use guides frequently and fully understand following game plans, which is good because we were on the same stretch of shoreline as with the Oklahoma Boys. Again, the pattern required a slow-thorough approach, and like I always tell clients, "If you hear yourself moving through the water you are wading too fast."

This trip began the same as the previous days see the bait and fish toward it. We started getting bites. Catch a red, catch a trout, and catch another red. As we continued along I heard Chantal exclaim, "Oh Crap!" Well, something like that

I looked her way, not knowing what to expect, just as she shouted, "Alligator!"

Instantly I recognized a large head surface within a rod's length beside her. Since my X3 was drifting closely behind us (using Power Pole remote), I managed to jump in and reach her very quickly. She stood perfectly motionless, unsure where the gator had gone when it submerged again. I picked her and Joel both up and we made another wade about a mile further down the shoreline, catching a couple more reds, a trout and a flounder. Soon though, our nerves gave out and even a small mullet splash sent chills up our spines.

We ran south to the Matagorda Island shoreline, again searching for mullet schools or pelicans working. What we found were pelicans working a drain with wind-driven current turning the water murky. A perfect ambush scenario for our speckled friends to hustle an easy meal.

After working the area thoroughly and catching a few fish, Chantal hooked into a really solid one that became her new career-best trout. A fat twenty-six-and-a-half-inch specimen. Hurrying to the boat to grab my camera, Joel began flashing the "we're done" sign so I used the Minn-Kota to ease over to them. Photos were made and that beautiful fish swam away.

I plan to continue employing this same strategy heading into December unless we receive a series of northers that drop the water temperature significantly and change the feeding patterns.