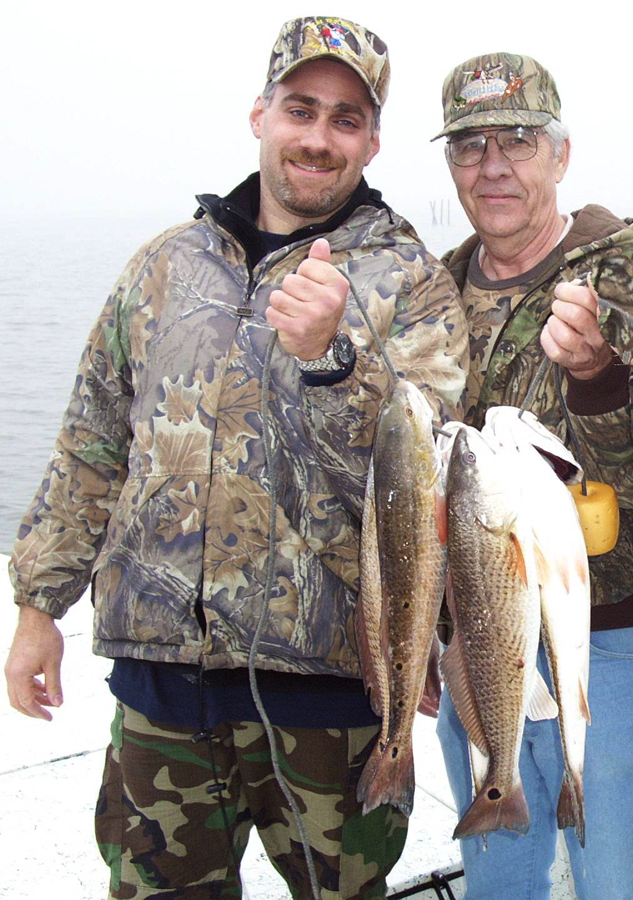 Overcast conditions make for a great hunt and good fishing!
As I sit down to write this month’s article on a beautiful, light-winded Tuesday, I can’t help but think about the poor people out on the bay duck hunting and fishing during these conditions.

Seems everybody I run into asks, “Why are you not out on the bay; the weather is perfect?” I start to respond, “Yeah…good for a picnic” but I don’t go into it because I will have to start my spiel about how hard it can be to conceal hunters on a shoreline and how the ducks are harder to decoy on blue bird days. Or maybe I could go into how difficult it is to sneak up on Ol’ Momma Yellow Mouth in 12” of water with mud up to the top of my ForEverLast stingray boots.

Y’all can have the pretty days and I will take the windy overcast days at this time of year. Don’t get me wrong I love those sunny picnic days too, but not when I am expected to produce.

One of my cast & blast trips in January proved my point precisely. David Myers and son along with two other friends came all the way from Alabama for two days of hunting and fishing. David told me over the phone while booking the trip that he has been trying to shoot a redhead duck for 3-years now with no luck; the other guys joining the trip had never caught a redfish. I told him that we have numbers of redheads in our area and he sharply said, “Well that is what all the guides have said over the last 3 years and I haven’t got one yet!”

This year we had very large concentrations of redheads so I told him once again that I was confident he would get the opportunity to shoot the ducks that have eluded him these past few years and the redfish should be no problem either.

The day started out great in my opinion. The weatherman had called for clear skies and light winds but luckily for me he was wrong. When I launched my Shoalwater Cat at Charlie’s Bait Camp amid the many hunters getting ready for blast off, we had 12 mph northwest winds and heavy overcast, almost foggy conditions. The moon was full, so the conditions could not have been any better for concealing the big, bright saucer that hung above our heads.

We had a successful hunt with everyone getting their much-desired redheads and many other varieties to boot. We headed back to Charlie’s around 9:30 that morning to exchange our shotguns and decoys for rods and reels.

We headed to one of my usual winter haunts where we had been doing very well on redfish and large trout over the past few weeks whenever the conditions were right. Luckily, that day’s conditions were exactly what we needed again. The water temperature had risen from a frigid 50 degrees in the open bay to a warmer 54 degrees in the muddy back lake area we would be targeting.

While running into the area I observed many scattered redfish, and by their wakes, all seemed to be keepers. Mullet were also plentiful all along the flat. I was thinking to myself that the fish gods were smiling.

Since my group was not equipped or experienced at wade fishing in such a muddy place, we opted to stay in the boat. If the weather had been clear and sunny we would not have had as much success staying in the boat. However, with the overcast, we were able to get closer to our quarry without being detected. We also had a good wind-driven current going for us that day due to the higher winds.

The plan today would be to drift ‘til we saw or caught a fish, then Power Pole down and hopefully get another. We would repeat this method ‘til we covered our designated area thoroughly.

I am not sure who hooked up first, but the second hookup came almost simultaneously. Unfortunately by the time I retrieved the net out of storage the first two reds had escaped just as quickly as they’d been caught. After questioning my guys and ribbing them about not being able to handle a “Texas Red,” I found out they had decided to tighten the drags because the reds were pulling so much line and they wanted to bring them in quicker. I explained that you seldom win a tug of war with a solid red using light tackle because they will either pull the hook or break the line. They agreed and we went back to casting, hoping more reds were milling about in the same area.

David asked what kind of fish were jumping out of the water and splashing around us. I told them they were mullet and that something, probably redfish and/or trout, was making them nervous; a good sign. We continued casting.

Within minutes one of the guys had the first redfish come to the net and it was a real beauty at 26-inches. Now everybody got serious and it turned into a competition between the four of them.

We were about an hour and a half into our fishing trip and the ‘Bama boys had boated 8 reds before the winds of change came upon us. My Shoalwater Cat pivoted around slowly on the Power Pole to a different direction and the sun broke out of the cloud cover to reveal a beautiful picnic type day.

It was like turning a switch off for the fish and the feeding frenzy stopped. Previously concealed by overcast skies, now the Rat Pack was no longer camouflaged and could be seen easily by the reds. In this hush, hush scenario I was not about to use my trolling motor and risk spooking the reds anymore so there we sat motionless in a sea of nervous baitfish for about 30 to 45 minutes making one cast after another.

Just when we thought we were done for, the fish gods smiled once again. The wind slowly switched around to the west then to the southwest bringing with it a very thick fog from offshore. Almost immediately after we were engulfed by the fog the fish started biting again. My customers finished out their limits and said, “This day could not get any better than this!” Boy, that is what every guide loves to hear his customers say!

If the skies had not clouded back up and concealed the Rat Pack on this particular flat I would have been forced to relocate to another area. The spots I target when fishing on clear, slack wind days in the wintertime are deeper areas such as the Intracoastal Canal, the famed Army Hole and channels leading to major back lakes. The deeper water of these areas helps conceal your boat from your targeted quarry.

Note the situation is a little different when wade fishing away from the boat but you still have to be more stealthy when wading into your fishing area as the fish can hear and see you better on calm, clear days due to no surface commotion and clearer water conditions.

In the month of February I still carry the same assortment of lures in my ForEverLast wading bag that I carry all year. The only thing I do differently is change out to more natural colors. I will use a lot more pearl, pearl/chartreuse, salt & pepper silver phantom and pumpkinseed. I will have lures that cover every level of water depth that I will be fishing such as Mirrolure She Dogs, Catch 5 and Catch 2000, Corkys, Crazy Croakers by Tidal Surge and Saltwater Assassins rigged Texas style on a 1/16 oz Assassin jighead.

Shellie and I are getting geared up and looking forward to the New Year. We will be at the Holder Fishing Show at the end of February so please feel free to stop by our booth #528 and say hello. We are always anxious to meet new customers and look forward to talking to those that have fished with us before. Fish hard, fish smart!