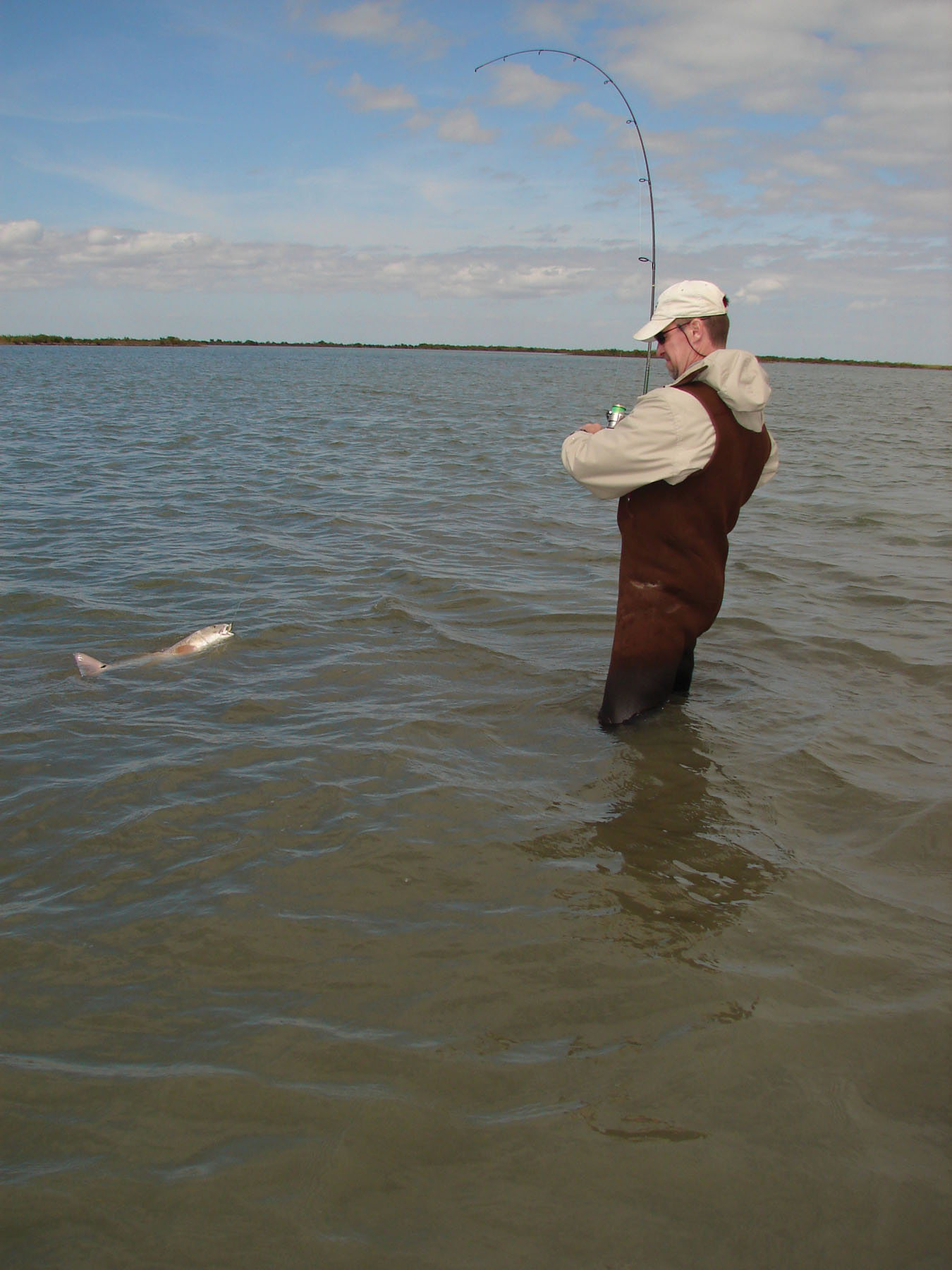 Matagorda Island back lakes should offer lots of opportunity in February.
Well, old man winter finally caught up to us. We had snow and a few nights with temperatures below freezing during the last two months and as I write this article the weatherman is telling me that we will have temps in the twenties for the next three to four nights. I fished the last two days and the temps in the mornings have been in the thirties. There is something not right about slipping around on a layer of frost while loading my rods into the boat in the wee hours of the morning. It would seem a little more normal to be loading my decoys and my shotgun.

The water temperature during the last few days of fishing has been fifty-one degrees in the open bay, and forty-six to forty eight degrees on the flats. Typically the back lakes would be warmer because of the muddy bottoms absorbing the sunlight; however, due to the overcast skies the lakes were not as warm as the open waters.

February fishing should be a lot like January was. I will be spending the majority of my time in the back lakes of Matagorda Island. I like the back lakes for a number of reasons this time of year. The muddy bottoms of these lakes warm faster due to the darker bottom when the sun does decide to show itself. This warmer water attracts baitfish such as mullet which is one of the major food sources for larger trout. The back lakes of Matagorda Island also offer some protection from the hard winds associated with cold fronts this time of year. During extreme cold snaps you could drift or troll motor deep water areas such as the Victoria Barge Canal and the Army Hole fishing the drop offs. Another plus for fishing the Victoria Barge Canal is that you will be protected from the north wind due to the high man-made embankments located on the northerly sides of the canal.

When the weather allows I like fishing the many reefs in San Antonio Bay this time of year. Before beginning a wade on a reef you need to make sure that you have bait in the area. During colder periods when the water temp is in the forties the bait will be subsurface, when this occurs look for swirls, ripples, flashes or any other kind of sign that there is bait present. Birds such as pelicans in the area or in the water nearby are another good indication that there is bait present. Once you have established you have bait in the area then you will need to wade the reef very slowly and fish the drop-offs of the reef or if there is a cut through the reef concentrate on that area. The trout are usually hanging where the shell meets the mud. Another important factor to remember, and I always mention it when talking about reef fishing, is to make sure that you and your buddies stop and plant your feet as soon as you get a strike or get a fish on. If everyone holds back you should be able to stand in one spot and keep catching until the fish sense something is wrong and move off. When this happens, start fanning your casts and moving slowly down the reef until you start catching again.

I have been throwing anything from the 4" Bass Assassin Sea Shad (paddle tail) in pearl and roach, and the 5" Saltwater Shad (rat tail) in pearl and pumpkinseed, to the MirrOlure Catch 2000 Jr. and the MirrOdine XL in the CFPR color. I have been rigging the soft plastics on 1/16 oz. Assassin jigheads. The slow fall of the light jig helps keep the bait suspended in the strike zone for a longer period.

No matter what lure you decide to throw make sure you work it slowly this time of year. When I am fishing the reefs this time of the year I always tell my customers that if you are not hanging up on shell occasionally you are probably fishing too fast. Fish hard, fish smart!