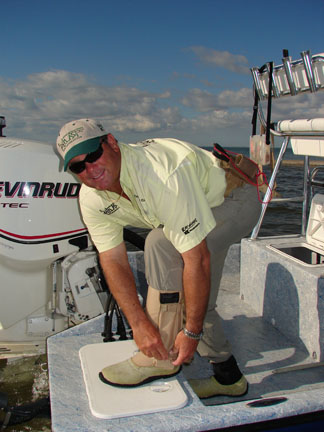 Stingray protection is still a must while wading the surf.
Editor's note: The following is an updated version of a surf fishing piece we published for Capt. Gary Gray in the July 2005 issue of TSFMag. The information remains very accurate and will serve any who aspire to become surf waders very well.

Waking up at 4:00AM day after day can be difficult especially in the dead heat of July; however, knowing I will be venturing out to the surf makes that early morning rise a little easier.

During this time of year through September you will find the Rat Pack making our way to the surf when the weather allows. The water temperatures in the surf are somewhat cooler making it a little more tolerable for the fish. At the time I am writing this article the bay water temperature has been holding steady at around 85 degrees with the surf water being a cool 81 degrees.

Doesn't sound like a lot of difference to us but to cold-blooded fish this is a huge difference. The difference in temperature between the two bodies of water will only get greater when adding in the warmth of the shallow flats. These shallow flats are where we typically do most of our wading and the temperature can be much warmer by as much as ten degrees. To your average speckled trout 5 to 10 degrees could be the difference between eating and not eating until the cool air of night cools the bay waters.
The first thing you will notice about trout in the surf is how much harder they will attack plastics or topwaters. There is usually no mistaking a bite; it is what most hardware chunkers dream about. I am certain that the highly oxygenated, cooler water you find in the surf is what makes the sleek super charged speckled fish less lethargic than their bay counterparts lying around in that 86 90 degree water.

When fishing the surf you must still fish smart. Look for bait, slicks and birds. Redfish generally are in the first gut right where the beach ends and the water starts. I concentrate my casts parallel to the shoreline casting into the breaking surf on the first sandbar. The trout start in the first gut early in the morning and move out deeper to the second and third guts later in the day.

There are dangers associated with fishing the surf or near passes to the surf. The closer you get to the passes the harder the current will run down the beaches which makes for very dangerous fishing situations. I will never fish close to the passes for this reason. If someone decides to fish near these passes please always wear a PFD.

Another danger that we always think about is the dreaded shark encounters. I have seen huge sharks roaming the surf over the years but have had no real problem with them. One of several precautions you should take is using a landing net. I have a great fear of reaching for a thrashing trout about the same time a shark does. The use of long stringers is a must while fishing in the surf and the passes. And then of course there are always the ever present stingrays and Man O'War jellyfish.

Another safety concern is weather. Pay close attention to wind speed and direction. Also keep an eye on the sky, inshore and offshore. Summer time squalls offshore are the norm but you can spot them many miles away. Do not wait until the wind picks up before you leave, it will be too late as the surf will be growing before the storm ever gets to you.

These are all safety precautions we as fishing guides employ every day whether it be on the bay or in the surf. However safety issues become magnified when fishing the surf due to the fact that there is no nearby protection offered in the open surf.

As far as what baits to use while fishing the surf, I use Saltwater Assassins exclusively. Be it Sea shads or Texas shads rigged on 1/16 oz Assassin jig heads. I pretty much stick to two colors of Assassins when fishing the surf. I call these my "Bling Bling" colors, they are red flash and fire tiger. No doubt any color will usually work but these have been proven producers time after time and what I consider to be my confidence baits. I will always have Tidal Surge's Crazy Croakers in pink and also pumpkinseed/chartreuse thrown in my wading bag.

Another good lure is the 51 MR series of Mirrolures, which used to be the standby lure for everybody in the surf but fear of big sharks or jacks taking your hard baits keeps us throwing the Assassins. Topwaters work especially well when the surf is calm making sure to work them over many different depths of water. I prefer Mirrolure She Dogs and He Dogs in the GCRBO (808) colors for all situations in the surf.

If you have always been curious about the surf do yourself a favor and try it. It will be one of the best fishing experiences you have ever encountered.