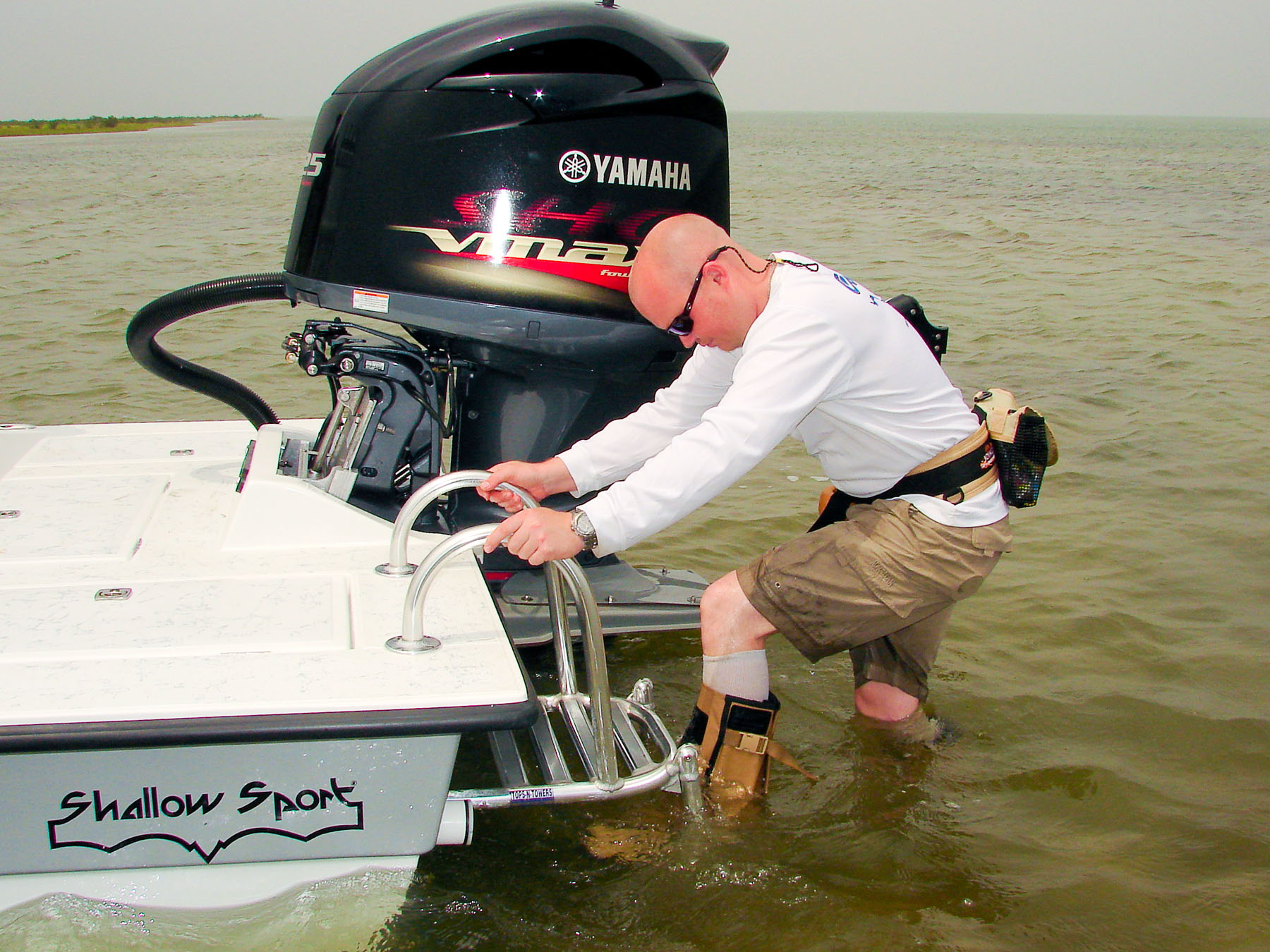 Chad Starr of Coastline Marine trying out my new wading ladder built by Tops-N-Towers.
Fishing thus far during May has been excellent for me and my customers while concentrating mostly on the south shoreline of San Antonio Bay. I love exploring the shoreline guts and also the drains that connect to the back lakes of Matagorda Island during late spring but June will bring a few changes.

The first week of June will find me fishing Espiritu Santo and West Matagorda, closer to Port O'Connor's gulf passes. My plan will be slip out to the surf when conditions allow while keeping a good backup plan working in the bay. I have always believed that surf trout fight harder and feed more aggressively and I'm hoping June will bring us lots of opportunity.

On one notable occasion I left a picky bite we could hardly feel in San Antonio Bay and made the long run to the surf hoping for something better. We were stunned as we walked into almost nonstop action and those surf trout were nearly ripping the rods from our hands on the strike. The summer surf is also famous for schools of redfish that think they own the first gut along with every She Dog and Bass Assassin we can throw at them.

I truly enjoy the change of scenery and the many different things you will see while running up and down the coast between Pass Cavallo and Cedar Bayou. I have witnessed huge manta rays swimming under my boat as my customers and I threw topwaters under birds, catching a smorgasbord of sharks, trout, and Spanish mackerel.

On the windier days when the surf is too rough you will find me near the passes wading one of the many sandbars located in the middle of West Matagorda Bay between the Matagorda Ship channel jetties and Pass Cavallo or wading any one of the shorelines near the passes or jetties.

While working the American Rodsmiths booth at the Corpus Christi International Boat Show, Scott Null introduced me to Dave and Karla Burch, the owners of FINS Superlines. Scott suggested I get out of the Stone Age and try Fins premium braided line. I had to stop him right there as I had tried braid and didn't like backlashes that came out of nowhere and snapped my Assassin of the jighead. I called them "whiplashes" which made everybody laugh, but whatever they were I didn't want any part of them.

Dave suggested I try his Windtamer line. I chose the 20# test which has the same diameter as 6# test monofilament. As of this writing I have used it for eight days and caught many redfish and trout and I've yet to have first "whiplash." It took a while to learn the sensitivity and I am finally no longer trying to set the hook every time my lure bumps a mullet or tickles shell or a few blades of grass. The lure control and sensitivity of Windtamer has me sold on braid and I'm ready to fill the rest of my reels. You can learn more by calling Dave or Karla at 859-282-1448 or go to www.finsfishing.com and take a look at all their products.

Another new and very important tool I recently added to my arsenal is my 24' Shallow Sport. I took delivery recently from Coastline Marine in Seabrook and have been on the water everyday since. I am very impressed with the quality and workmanship of this rig every time I take it out. The fit and finish is second to none and the guys at Coastline Marine www.coastlinemarine.net did an outstanding job of rigging without me having to stand over them. Chad and Cole talked me into the new Yamaha 225 SHO and I am so glad they did. I have never driven an outboard that pulled from bottom to top end like the new four stroke Yamaha.

Bobby Byrd at Tops and Towers www.topsntowers.com worked with me and we put together some new aluminum designs that will make your Shallow Sport or any other boat more functional as well as better looking.

I will be bringing more reports on this awesome ride next month. Until then, if you would like a test ride or would like to see and feel the performance of the new Yamaha, give me a call or stop me when you see me at the docks.