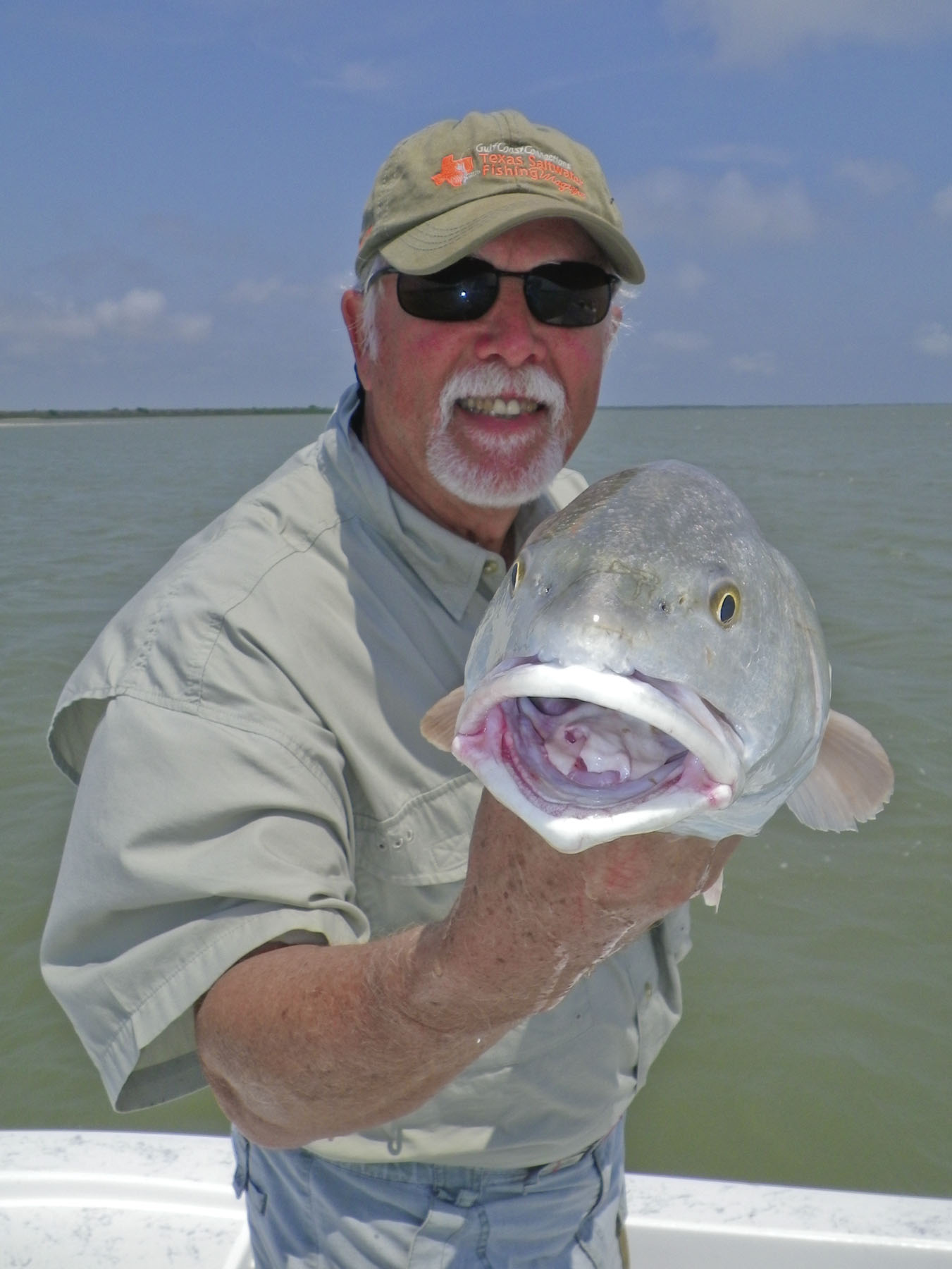 May is shaping up to be pretty much as expected here on the middle coast and catching has improved. The wind has decided where we would fish a lot of days and some days you could fish wherever you wanted and we did. Calm days have been good for wading the north shoreline of Espiritu Santo and reef hopping in the middle of San Antonio and Mesquite Bays. Quality trout have been holding more consistently on the reefs. Shoreline wading often has us working through a lot of dink-sized trout to find what we wanted although when a good shoreline pattern is established it usually hold for several days.

June should bring a more stable weather pattern and our speckled trout should be a lot easier to pattern. I will be trying to fish the surf off Matagorda Island whenever the wind allows. If the wind causes the Gulf beach to be a little rough I will have the shorelines and the many sand bars of West Matagorda Bay to choose from. These bars located near the passes will hold good numbers of fish along the dropoffs and flats anytime you have a good tidal flow.

In the surf I will run well off the beach until I see some type of sign that tells me I should stop and fish. No, I don't mean a bent rod! Although that also works, it is not advised unless that rod belongs to one of your buddies. Obvious signs are pelicans swimming in the first and second gut good for a starting point. Pelicans or gulls standing on the shoreline is still a good sign and worth a try. A slick in the second gut or a single fleeing mullet close to the beach are two signs I would never pass up.

Tidal movement (current) is also needed in the surf to trigger the feed, just like in the bays. You will notice when the tide slows down the fishing slows; which also means that when the current increases the bite usually increases.

The lures I choose in the surf are pretty much the same as I use in the bay. What does change though is how long you can leave your topwater on. When fishing the surf the trout seem happy busting up your She Dogs long after the sun has reached its peak, and just like when fishing the bay, the fish will let you know when they are tired of coming to the top. As for soft plastics, you may need to change out that 1/16 ounce jighead. A 1/4 ounce jig will definitely help you probe the depths of the second gut more effectively.

A lure that for some reason gets overlooked nowadays (by me and many anglers) is the spoon. Back in the day this was one of the most-trusted and most-used lures in the surf. Next time you go to the surf tie on a 1/2 or 3/4 ounce Johnson Sprite or whatever your flavor might be and give it a shot. I think you just might be pleasantly surprised at the result.

Whatever lure you choose to tie on, make sure it has no personal meaning for you or keepsake value because you could end up donating it to one of the many toothy critters that lurk along the beach. So don't break out your old Queen Bingo and start tossing because odds are those toothy critters will take it from you before any other member of your party gets bit.

On most days I will start with a She Dog and I really don't think color makes a big difference. The size of the topwater you choose will almost always make more of a difference to the fish than the color. Even so, my standby She Dog colors are the GCRRH (red head, chartreuse back, gold chrome belly) or the CHPR (chartreuse back and belly, orange throat, pearl sides). The red head of the GCRRH helps me see the lure while riding the swells.

As far as soft plastics, I prefer the five inch Saltwater Assassin in Red Shad and Baby Bass, but again color is probably not the big thing here. I have seen people that switch colors every couple of casts when all they had to do was keep throwing the one they started with and they would have ended up catching the same amount of fish (or perhaps more) but they would have a lot more lures left in their box at the end of the day.