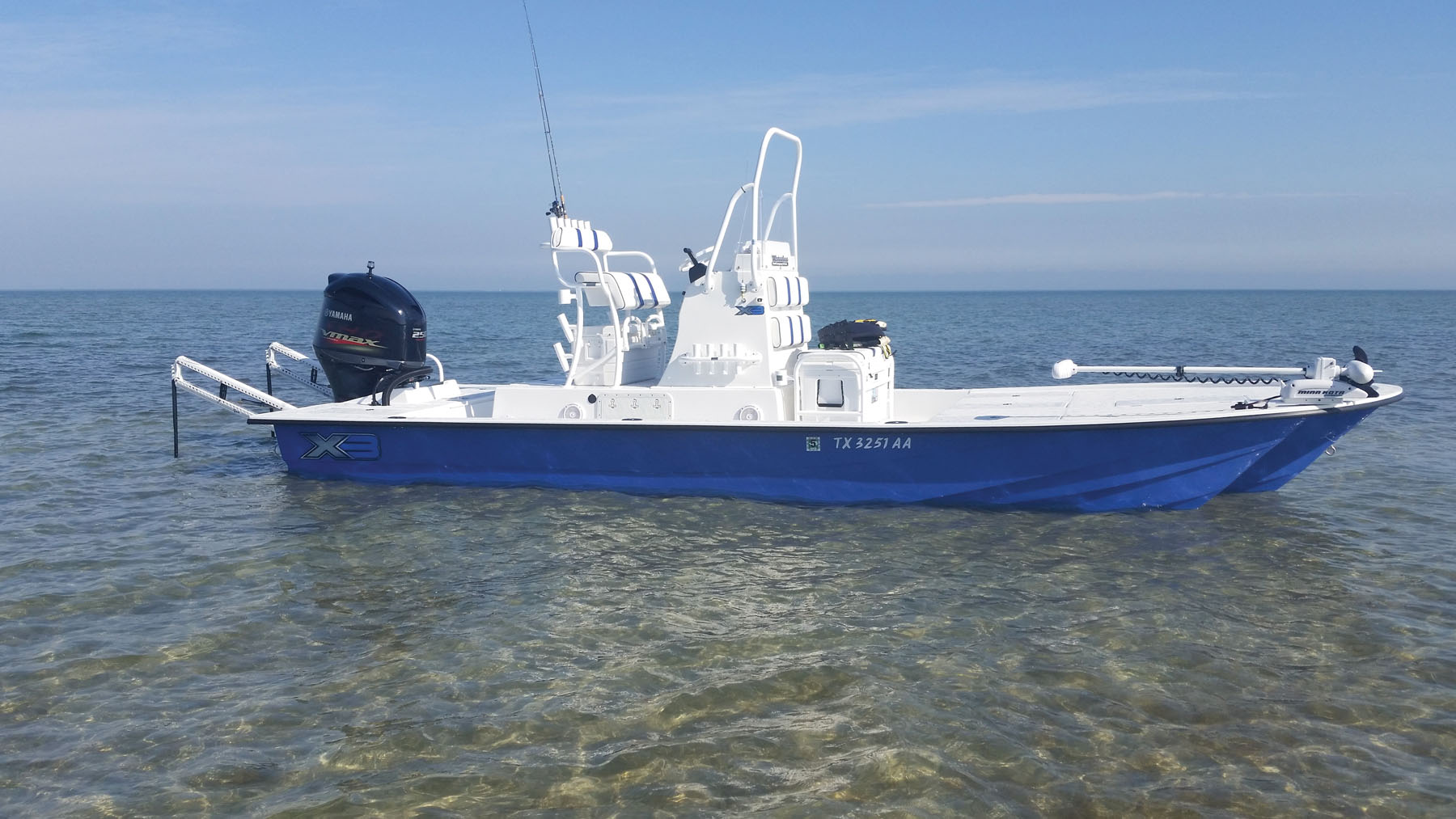 My new Shallowsport X3 makes my job so much easier.
Well guys and gals, spring really sprung here on the middle coast since my last article. The fishing for me and my customers has really been a big step above the previous several years. The trout and redfish are thick on the shorelines chasing schools of menhaden and mullet. The rafts of bait make it a lot easier for us as it gives us a target to cast our lures at and around instead of just blind-casting on an open flat. Chasing these schools of baitfish while wading and teaching my clients what to look for and where to aim their casts got me to thinking. A lot of fishermen are having trouble understanding what goes through “this” guide’s mind when I see scattered bait or a school of bait.

When I see a school of menhaden or mullet rafted down a shoreline, just cruising up and down, I picture in my mind how the redfish or trout might be cruising under the schools. From the way the bait is acting I try to picture if they are directly under, in front of the school, or maybe a short distance behind. When doing this I can recall certain situations where the mullet were rafting up and acting similarly to the ones I am watching at that time. I can even relate when I saw single reds or trout, staged nearby, shadowing the bait. I always try to remember how the mullet or shad reacted or perhaps showed no reaction to game fish presence. All of these mental notes came from time on the water and experiences while fishing. Recalling details of prior encounters is the basis for how I will approach the situation I am observing.

My imagination gets away from me from time to time but I do put a lot of thought into situations like this while fishing. Some would say too much thought. But I beg to differ as the dissection of the smallest of details while fishing has paid off for me more times than not over the last twenty-nine years of guiding. Okay back to the story.If you’re asking yourself what brought this to my mind, it’s because for the last three weeks I have had some experienced wade fishermen sharing wades with me and we have been following these schools of mullet. It just amazed me after telling them to look for the rafts and imagine that there is probably a redfish or a trout under each one. I would go on fishing and pulling a red or a trout out of the bait schools pretty regularly.

They would ask again, “How are you catching those fish when I’m not?” I would reiterate my approach to the schools and yes, not every school that came by had a game fish under it but, more had game fish than didn’t.

Some of the guys would eventually catch on but most would just wander around blindly casting towards the shorelines, which at times can also be productive. But not when the 90% of the bait is rafted up seventy-five feet from the shoreline.

I brought this situation up to remind everyone that even though you are fishing close to where the action might be you should put all your senses to work to dial in even closer. It will make your experience that much better when you put a plan together and it works out.

This rafting bait scenario will play out all summer long and into the fall so just practice watching baitfish and their actions, and use your imagination.

During these shoreline wades we have been starting the mornings throwing obnoxious topwaters such as the MirrOlure She Dog and the He Dog. We have been letting the fish tell us when to swap back to the Bass Assassin 4” Sea Shad.

As far as colors on the topwaters, just pick one. It doesn’t seem to matter to the fish. We have been sticking with more natural hues while throwing the Assassins like, Copperhead and Green Moon. I always rig my Assassins on a 1/16 ounce Assassin jig heads.

In closing I would like to let everyone know that my new Shallow Sport X3 is still proving to be a very valuable asset to my business. No longer do I have to worry about going the long way around rough bay waters or worry if my clients and I will get home safely when weather and water gets rough. Not to mention…it is one good-looking vessel!