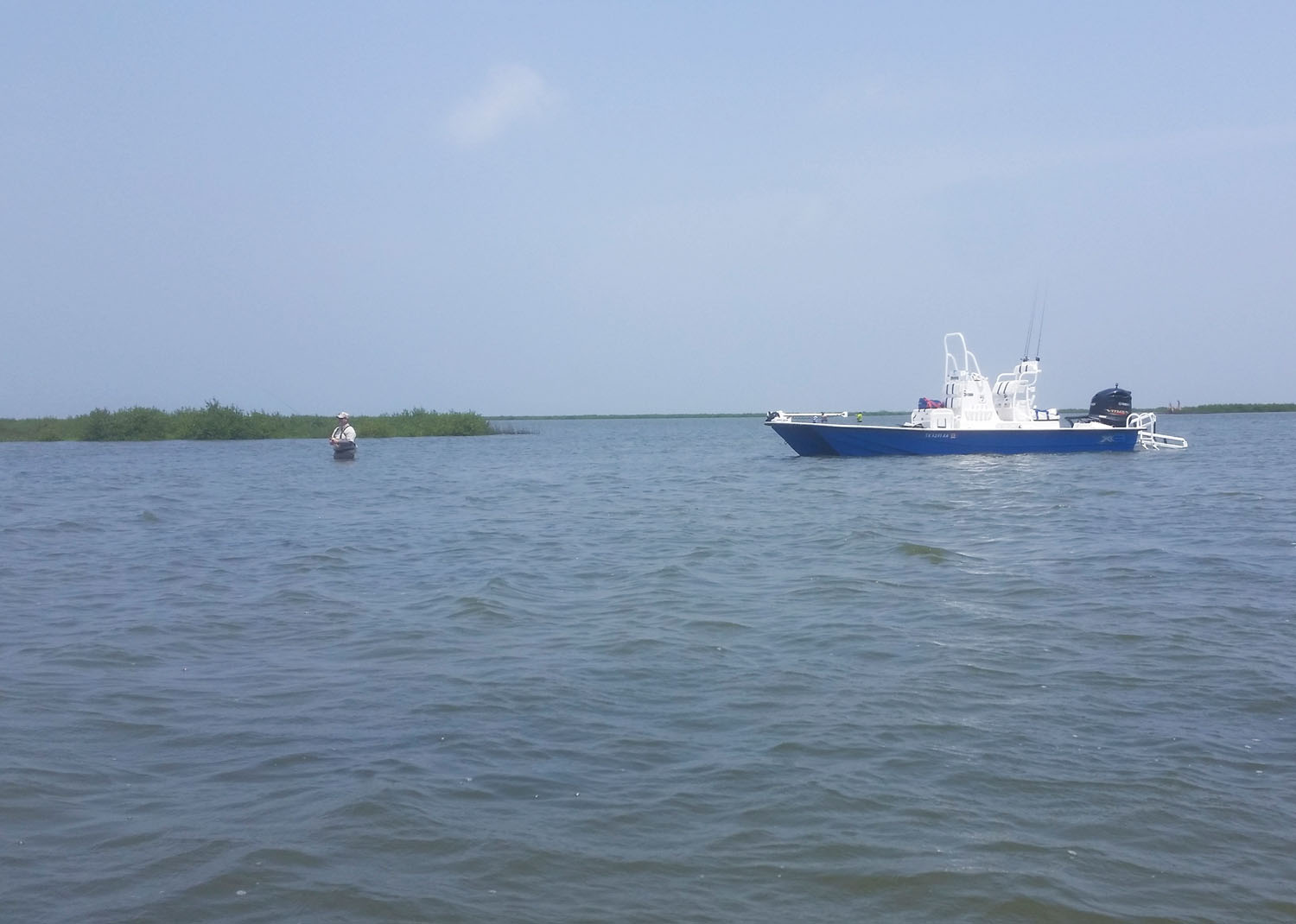 Can't thank owners of Coastline Marine in Seabrook enough (Cole and Chad Starr) for giving me the opportunity to fish from this beautiful office every day.

All I can say is that if you haven't been catching fish for the past month you may want to take up golf. It hasn't mattered whether we fished back lakes, bay shorelines or San Antonio mid-bay reefs, we have been catching good numbers of quality fish.

OK maybe there was more to it than just throwing a line out and reeling in a fish but it has consistently been as good as I've seen in a very long time.

To give you an example, I will recap a recent trip. It was Saturday morning and as I sat in my Shallow Sport X3 watching unusual hustle and bustle, it occurred that there must be a tournament going on. Not that I have anything against them, but tournament days can sometimes be tough. Anglers get all amped up and do things they wouldn't normally do, like cutting your drift or crashing your wade. Worst of all I hadn't told my guys to come to Charlie's early to beat the crowd.

Luckily my crew showed up early. We got their gear stowed and idled away from the dock, clear of the boats that were tied there. Notice I said, "Idled away?" The few that had already left did not give us that courtesy, leaving us banging the dock in their wakes. Back to the trip...

We arrived at our first stop and rounding the corner I let out a sigh of relief–no boats in sight. But my excitement was short-lived. Riding the troll motor toward the back of the cove I could soon make out several waders and a boat with no anchor light.

No problem, just make a little adjustment and we would make our first wade along the opposite bank of the large pocket. There were no large rafts of shad like I had fished the previous few days but there were mullet milling about.

After an hour everybody had caught some fish but not what I was expecting. Loading everyone back into the X3 we headed across San Antonio Bay to an unnamed reef that had been producing quality trout. Along the way I began noticing slicks that had been stretched by the wind. The origin appeared to be the drop-off along a reef I have trampled many times in my thirty years of guiding.

Turning to the guy next to me I announced a change of plans. I circled back and lowered the twin Power Poles, proceeded to go over the plan, taking time to explain to two first-time waders why I had selected this reef. When I told them about the slicks they just looked at me like I was crazy. They'd never heard of it.

But to their benefit they listened intently to the plan. As for the seasoned member of the crew, he too listened but then approached the area the way he thought he should. Long story short, I was the last guy out of the Shallow Sport and I headed right up beside the newbies and made a long cast toward the drop-off. "Let it sink–let it sink–don't reel," I told them. Thump! I proceeded to reel in a healthy 18-inch speck. I explained that if it happened on my next cast, "Just stand right here beside me and do the same thing."

One of the guys replied, "I'm not waiting to see if it happens again," and stood right beside me and proceeded to start on his limit of quality fish. The other newbie soon moved in and got in on the action.

Where we stood was about thigh deep and we were throwing to the drop-off that was 5- to 6-feet deep. We were throwing the tried and true 4-inch Bass Assassin Sea Shad paddletail on 1/16 ounce Assassin jigheads sugar & spice and copperhead.

After achieving their limits they switched to MirrOlure She Dogs and landed more quality trout throwing out over the drop-off. The largest trout caught in this area came on the She Dogs. We left those trout biting and headed for an area that had been producing redfish on a regular basis. But that's a whole other story.

The point I wanted to make was to never take things for granted while looking for fish. It's no different than any other type of hunting. Use all the signs available and then make a game plan. Had I ignored those slicks we might have arrived at the unnamed reef to find it already covered with waders, and there's no telling how the day might have unfolded.