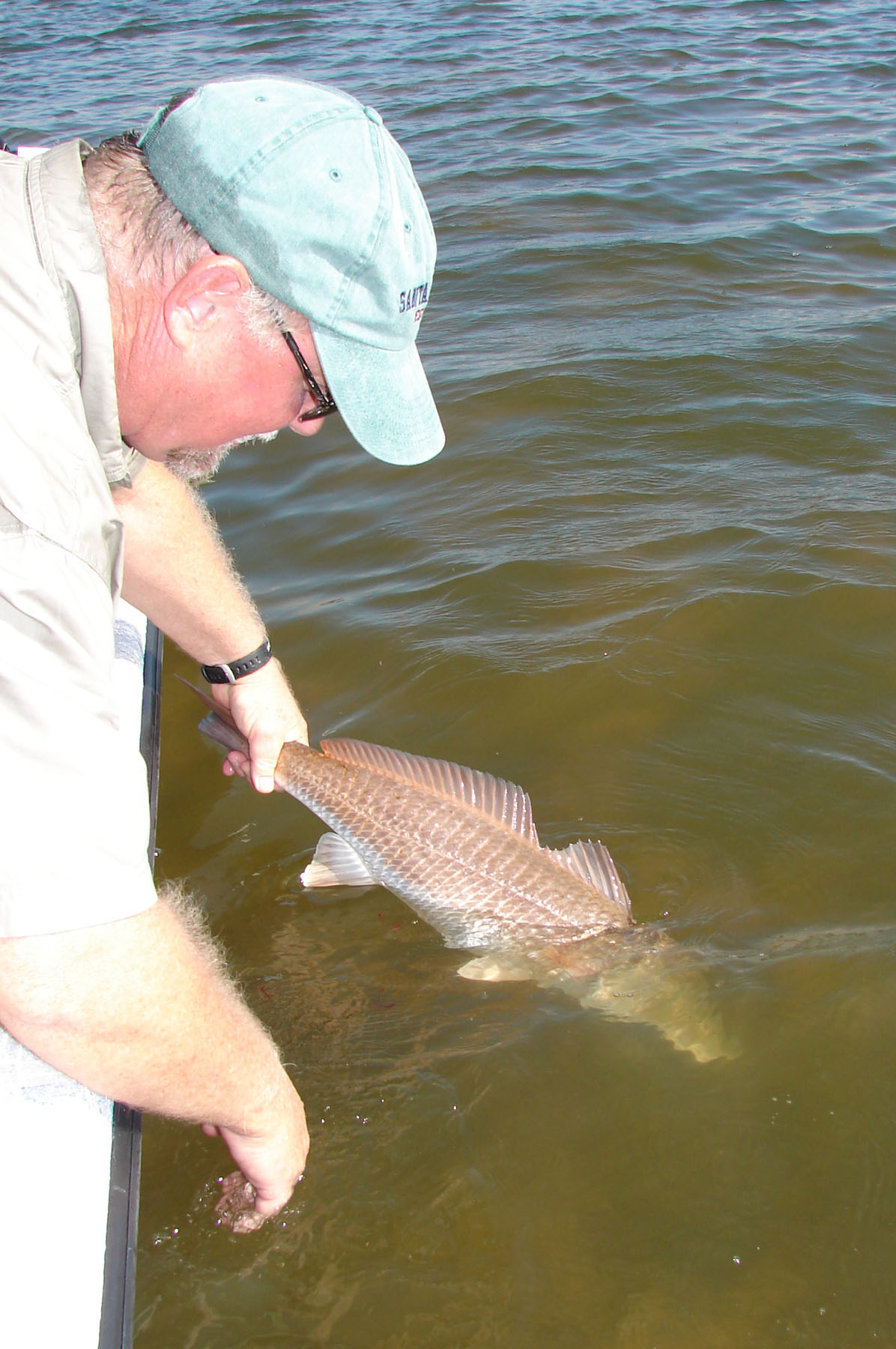 Larry Williams releasing a nice oversized redfish.
September fishing was great for the Rat Pack. All the cloud cover and rain we received during August and September made for cooler water than normal in our bay system. We also were able to make many trips to the surf and every trip out there more than fulfilled my customer's expectations. The shark problems we had in spring and early summer seems to have subsided for now for whatever reasons. Who knows, maybe they had their fill of trout attached to stringers!

About 95% of the fish that were caught by the Rat Pack in September were caught on Top Waters. We would start and end the day working the first and second guts throwing She Dogs in chrome/blue back, chartreuse/pearl/chartreuse and 808 a.k.a Halloween. The trout were not disappointing, hitting with their typical aggressive nature, almost taking the rods out of our hands with their vicious strikes. For the times we were throwing plastics we were usually throwing the Assassin Swimming Shiners in clown or baby trout colors. This particular lure has really worked well for me these past two seasons and if you have not tried them you are only hurting yourself. I rig all my Assassins on a 1/16 ounce Assassin jighead.

In October our cold fronts will pack a little more punch and last a little longer than the ones we witnessed in September and this should only help improve the fishing. I will be spending a lot more time in San Antonio Bay in October working large flocks of birds over hungry trout and reds and also working the many shell reefs to find my speckled friends. The back lakes of Matagorda Island will also be seeing a lot more of my new Shoalwater Cat as we try to trick our spot tail friends with our She Dogs and She Pups in our favorite colors.

We will also be spending time getting ready for the first split of duck season which will open November 3rd and run till November 25th and then will open again December 8th running through January 27 of 2008. Bay Rat Guide Service will now be offering dove/fish combos, dove, alligator, and wild hog hunts as part of our outdoor lineups that still include duck hunts and duck/fish combos.

I am anxious and excited about the upcoming duck season because I have a new buddy hunting with me and his name is Sam. Sam is a one year old Lab/Golden Retriever cross that absolutely loves the water more than any dog I have ever seen. We adopted Sam from the Pasadena Animal Shelter with the help of Belinda Veazey of the Houston Labrador Retriever Rescue. We saw a picture that Belinda had posted of Sam on the internet along with the information of where he could be found. If you are not familiar with Belinda Veazey you should know what great lengths she goes through to try and save many dogs from certain death. Anyways, after several phone calls and completing an adoption application, Shellie drove to Pasadena to pick up my new friend. He spent a month with us before we took him to Lora Neans at Coastal Bend Retrievers. We are looking forward to Sam returning home this month to rejoin us and our other two rescued labs.

In closing I would like to give you guys a heads up on a new reel that just got better. Since March '07 I have been using a Revo SX HS reel made by Abu Garcia. I was curious to see how well it would hold up to my rigorous fishing methods. Well I have to admit it surpassed my expectations even after dropping the reel into the water while wading in April and forgetting to clean it until two days later. When I opened it up to inspect the damage I found that there was no sight of saltwater penetration or corrosion. I was still using that reel until I got the new Revo Inshore series reel in August. They have made some changes to the braking system, made the handle a little longer and I am sure they have changed some of the guts in the reel to better handle Inshore fishing. When you can buy a reel for $149, use it like I use them, and have no problems, what more could you ask for. Kind of reminds me of another great reel we used in the good old days known as the Abu Garcia 5000 the Red Reel.Fish hard, fish smart!