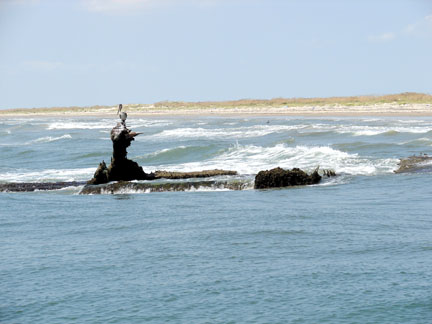 The famous Darlington wreck on the Matagorda Island beach.
On a scale of one to ten, I would have to rate the September fishing in the Port O'Connor/Seadrift area as an eight. The majority of my fishing has been taking place in the Matagorda Island surf and the decision to head for the wild blue yonder every time the weather allows has been easy for me.

The thing I will remember most about the surf in 2009 is how plentiful the redfish have been. Yes, we are still catching surf trout, but it doesn't seem to matter where you stop along the Matagorda Island beach, reds of twenty-six to twenty-eight inches have been waiting and willing in the first gut along with a few oversized fish to test our tackle.

I have always made a practice of checking stomach contents of the fish I clean. What has amazed me lately is that in every redfish I cleaned from the surf this summer I have found pieces of sand dollars. I have no clue what they see in sand dollars but, then again, I am reminded that redfish will certainly eat some unusual lures.

Sharks were another interesting aspect of surf fishing this summer. We expect to see sharks while fishing the surf, but they seem more numerous and have been hanging with us a lot longer, sometimes chasing each redfish as we reel it in. Using a landing net has been mandatory. You do not want to be reaching for a fish at the same time a shark is.

Lure selection has been varying from topwaters and soft plastics to spoons with angler preference ruling as they would hit any and all most of the time. Mirrolure He Dogs in GCRBO, CRBL and CHPR have been doing well. We work these lures very fast until we get a blow up and then slow the retrieve to get the reds to take it. Usually it didn't take much enticing as there was too much competition for them to hold back.

Another lure that has served us well is the good old Johnson weedless spoon in the 3/4 ounce size. I choose the 3/4 ounce weedless version for the surf because of the strong single hook and the weight makes it easy to cast into the wind. You don't have to worry about hanging grass in the surf so you can work it at whatever speed is needed, even dragging on the bottom sometimes. I have changed the way I rig the spoons, though. Eighteen inches of 30# leader material tied to a #10 Berkley swivel works better in the surf. In the bay I prefer a swivel and split ring attached to the spoon itself and do not usually include a leader.

The lure we have been throwing more than any other in the surf is the Saltwater Assassin rigged on 1/4 ounce Bass Assassin jigheads. The larger jighead makes it easier to throw into the wind and like the spoon you do not have to worry about hanging up as happens when fishing shallow water over shell and grass. The best colors have been the same as in the bay; Baby Bass, Cajun Croaker and Bone Diamond. These have been my "go to" colors all summer and looks like they will continue fitting the bill going into the fall.

What I enjoy most when taking first time surf fishermen is how much they appreciate the adventure. We often see huge rays, sharks and sea turtles. On the beach and in the dunes you will see deer, coyotes and jack rabbits. Shipwrecks intrigue everybody. There are wrecks located in the water and some are washed up on the beach. There are even some located in the dunes. A word of caution to anyone thinking of going beachcombing or climbing the dunes; keep a sharp eye as there are many rattlesnakes and other hazards there. Not to mention that beachcombing cuts into your fishing time.

Looking towards the fall months, I will be spending a lot of time along the deeper edges of the reefs in San Antonio Bay. My primary lures will be Saltwater Assassins, in the colors I mentioned earlier, rigged on 1/16 ounce Assassin jigheads. Always remember to wade slowly and as quietly as possible anytime you have shell underfoot. One strike will be your signal to stand your ground and fish the area thoroughly with long casts before moving forward. Fish hard, fish smart!