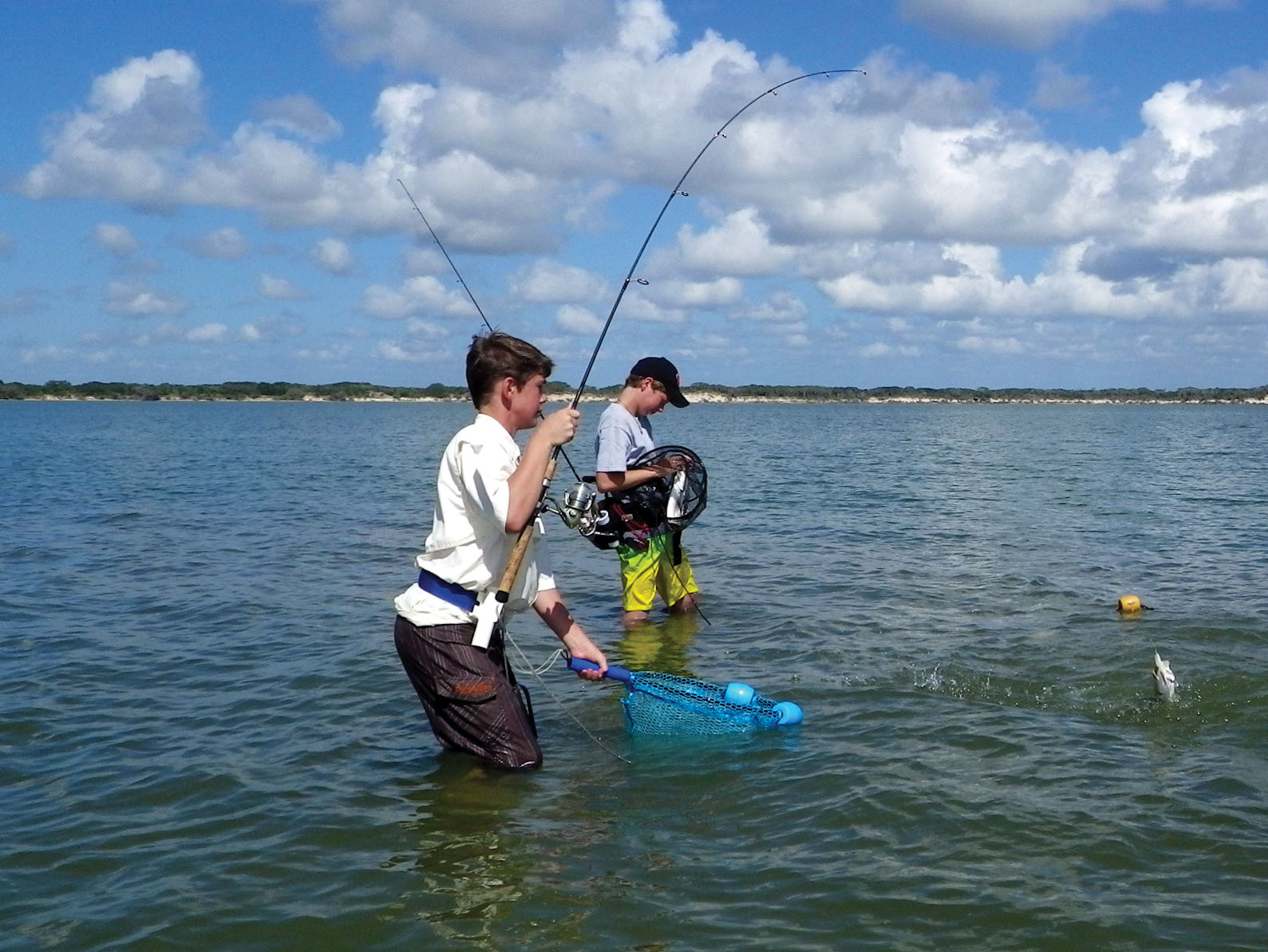 Chance Wegner nets a trout while Ryan Sellers frees his lure from the net for another cast.

September was a precursor for what to expect here in the Seadrift/Port O'Connor area in October. With the drought continuing and salinity increasing every day you will likely see the bow of my Shallow Sport pointed towards the head of San Antonio Bay more often than not. This isn't my first drought. When average bay salinity hedges toward 40-ppt as it is right now, spotted seatrout will seek the lower salinity where the freshwater from the Guadalupe River enters the estuary.

For the majority of the summer we were able to catch all the redfish we needed as far up into Mission Bay as your boat would allow you to go. Now, Mission is not your average bay and there were days when people were catching largemouth bass, redfish, catfish, and the occasional speck with regularity. Of course, everybody released the bass.

During the first weeks of September I spent a lot of time wading the reefs in San Antonio Bay. I neglected the reefs when the Matagorda Island surf caught fire in August and it felt good to be back on my old stomping grounds.

I will not get into naming reefs but suffice to say if there is bait holding over shell you should be able to catch a fish in October. The way I approach a reef this time of year is to come in on the troll motor to about 100 feet and then watch for some type of bait activity be it mullet flipping, ripples on the surface, or birds hovering nearby. Any of these will show you where to begin your wade. Ditto if you plan to stay in the boat and drift.

I usually try to set up with the wind at my back, wading toward points and ledges that jut out on both sides and also on the ends of the shell. We will move ever so slowly until we get that telltale thump, and I will tell everyone to stop and fish for a while. The most common mistake is to keep walking into the fish. I know you are saying I am wearing that line out but it still happens almost everyday that I am on the bay. Someone hooks up and they will actually walk towards the fish as they are reeling it in. I have to use the so-called different voice to make them stop in their tracks or use it to stop one of the other anglers from walking all over the fish.

Okay we have our location chosen now we will choose a lure. I have long used Bass Assassin lures primarily for the same reason a lot of anglers shy away from them. Assassin lures have always been the softest available and this increases the action. Yes, you will go through more Assassins in a days fishing than other brands but if they catch more fish it makes sense to me to continue using them. Just saying is all.

I will actually be using two types of lures (primarily) during the fall months in San Antonio Bay. You will see my shirt pockets overflowing with 5 Saltwater Assassins in Baby Bass and Bone Diamond colors and you will also see a bunch of the new Die Dapper Assassin in the Chartreuse Dog, Sand Tout and Houdini. If you are familiar with the Bass Assassin color charts you have probably already figured out that I prefer lures made in natural colors. I rig all my Assassin baits either weedless or with 1/16 ounce Bass Assassin jig heads part #JA 05001.

The main change we will be witnessing during the month of October is the cold fronts getting stronger and more frequent, actually dropping the temperature and humidity for longer periods. During the fall season you should always be on the lookout for birds working in San Antonio Bay as the shrimp migration continues. When working the birds you should try and use up all your old plastics that may have faded or bled into each other as the fish under the birds are usually in a feeding frenzy and it really doesn't matter what you put on the jig head.

With the passing cold fronts we will be seeing the annual migration of ducks starting to take place and hopefully we will get some much needed rain all over Central and South Texas, which in turn should put more water traveling down a river to a bay system near you. Let's hope.