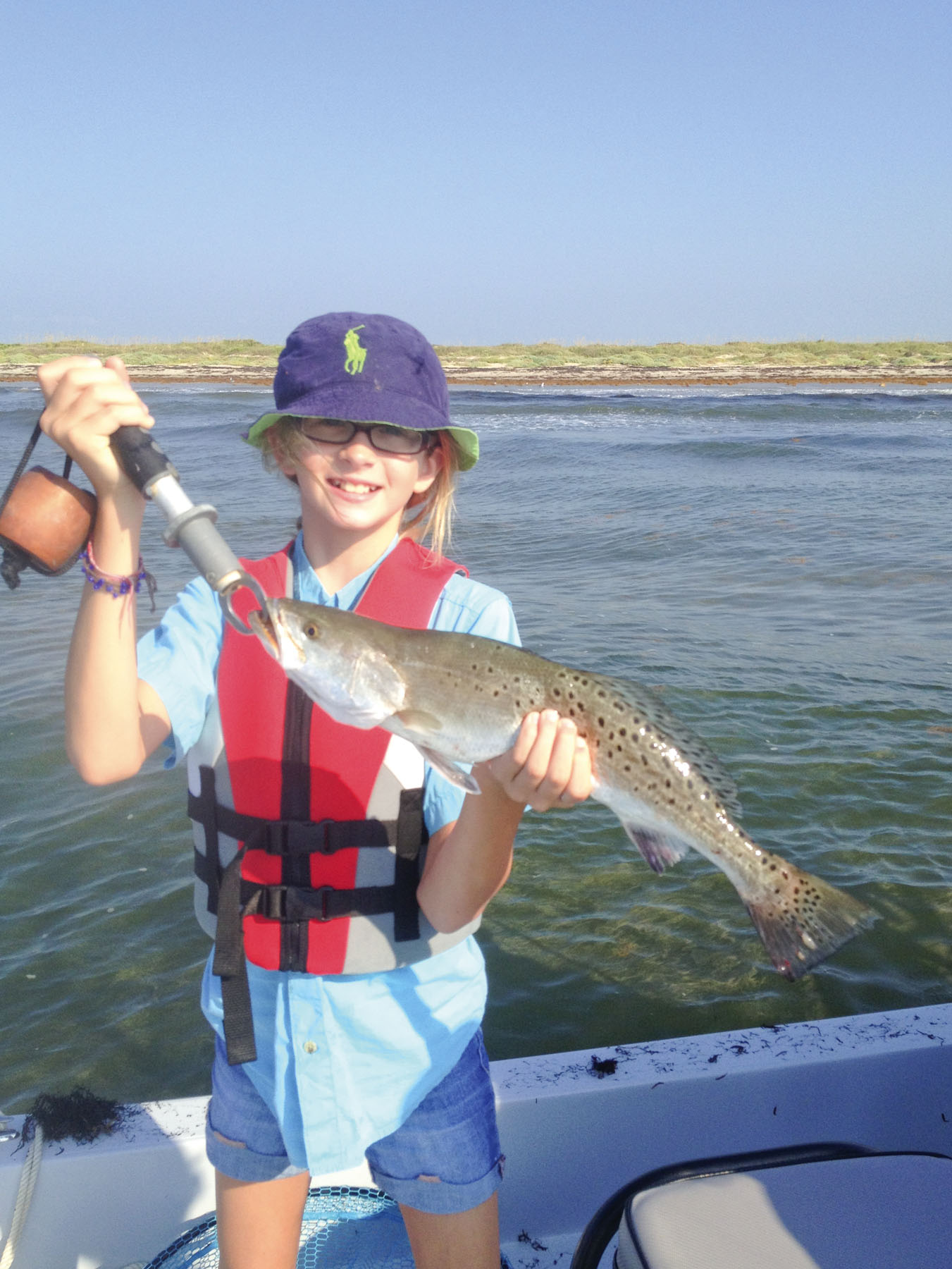 Sarah Bynum with a nice surf trout.
Through the month of September you just never knew where you might spot my 24' Shallow Sport any given day. On Monday we would be wading the south shore of West Matagorda Bay, on Tuesday you could spot the Rat Pack heading through Pass Cavallo to catch trout and reds in the surf, and sometimes maybe trolling or drifting the beach for tarpon or any other big fight we might find. Quite a few days we headed south down the ICW from Charlie's Bait Camp to wade the mid-bay reefs. There was never a shortage of bent rods or fun.

I will follow a similar agenda in October but likely with fewer trout caught in the surf. Don't be discouraged though, what we lack in trout numbers will be more than made up by bull and slot redfish. It is a nice change and we enjoy it, but with aching arms from so many reds. Now if you're thinking reds are only game in the October surfthink again. The beauty of the October surf is that you never know what species will show up next.

Another thing I really enjoy about the surf in October is how the water clears up and the gets a little blue hue to it. When it gets this clear you will really get to see a lot more of the fishery. Meaning that - when you come up on birds working near the beach you will get to see what is going on under the water.

One year Shellie and I were on a fun trip to the gulf beach and we came upon birds working just outside the third bar. Under the birds we could see a host of predators ferociously attacking bait - trout, ladyfish, Spanish mackerel, and sharks of all sizes hitting baitfish, and sometimes each other.

We started throwing She Dogs in whatever color we had tied on or could get to quickly, and I could have probably thrown my anchor and got a bite. Anyway, after losing a few She Dogs to sharks we started sightcasting to the trout that we could pick out of the melee.

I can't remember ever having that much fun working the birds. You would be reeling in a trout with a mackerel alongside trying to steal the plug and suddenly a shark would appear. A couple times we had sharks hit the fish we were fighting and get hooked themselves. If he didn't bite it off or break-off quickly you were left little choice but to tighten the drag and snap the line to avoid being spooled.

Probably the coolest thing we saw that day was a pair of manta rays that swam around and under our boat. You could make them out perfectly in the clear blue water. They were huge but very gentle in the way they moved and swam around the melee that was going on.

Another trip I remember well was when I had a couple of guys from Cuero that worked in the oilfield and they wanted to wade the surf with me. I said, "No problem, let's get it on."

Well, while heading down the beach in all that clear water to where I had been catching fish, I noticed the guys pointing to something in the water every once in a while. I knew what they were seeing. When we got to our spot one of them asked, "Were those sharks that we saw coming down the beach?"

I said, "Yessir; but they haven't been bothering us." They both quickly agreed this wouldn't be a wading trip as the sharks were larger than any they'd ever seen. Sometimes it's better not to be able to see everything in the water.

So on that particular trip we stayed in the boat and they had a great day catching redfish, mackerel, trout, and even landed some of the smaller sharks. I just hope seeing those big sharks didn't ruin any future wade fishing trips for the duo.

I know this is not my normal "we are throwing this lure at this place" article, but just a little insight into what you can encounter in the surf this time of year. You will still have trout on the reefs of San Antonio Bay and you can still fish the mouths of all the many sloughs and have great days – but you can only fish the October surf one month each year.