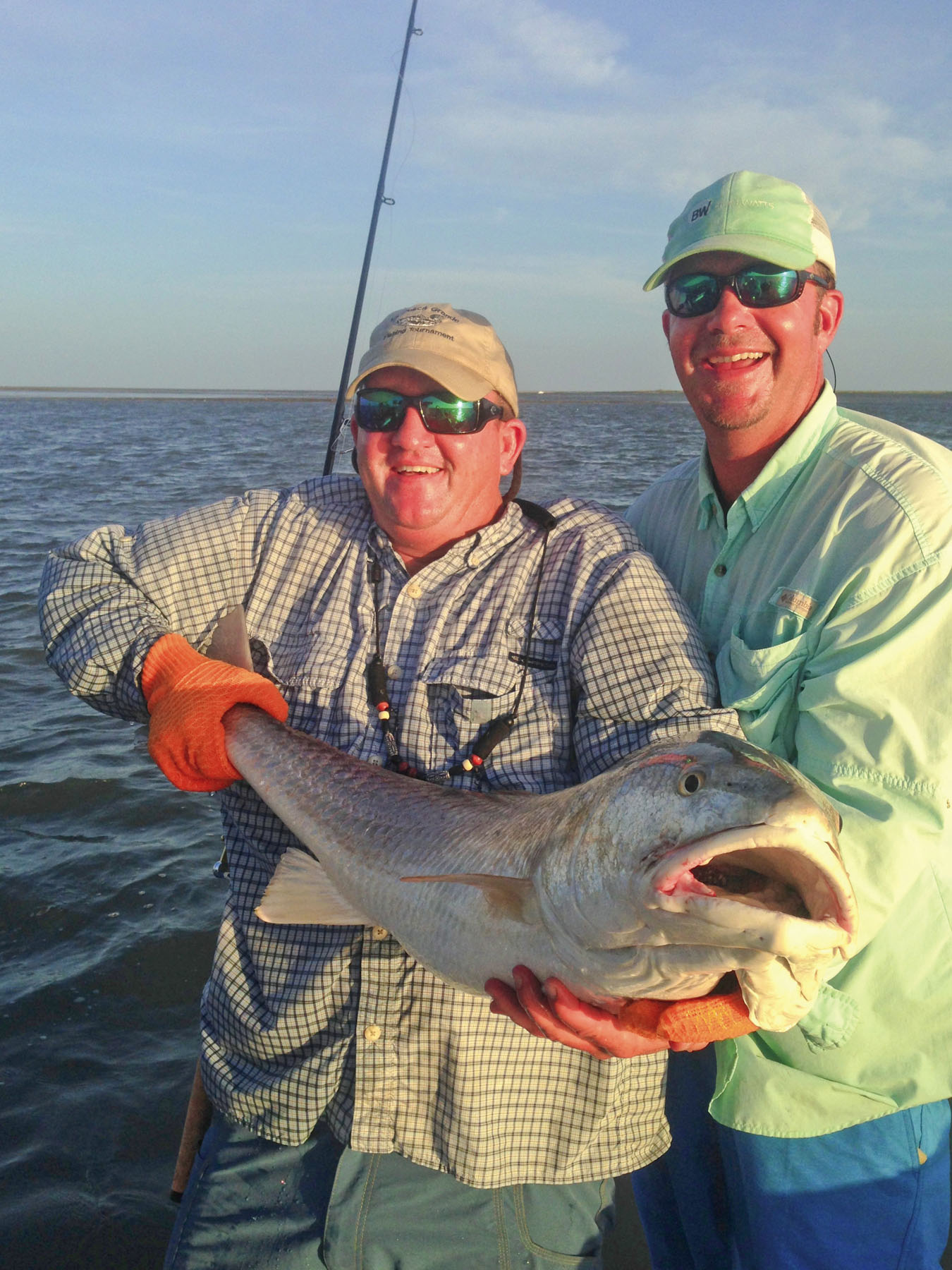 David Denbow and Shane Watts team up to hoist a bruiser of a redfish.
Well we're all but done with another dreadfully hot middle-coast summer. Due to wind and water conditions I didn't get to make as many trips to the surf as I normally do, but this has hardly been a normal year in many aspects. The trips we did make had a little different kick to them–being repeatedly forced to leave good fish to find "other" fish. Sounds crazy but on nearly all my 2014 surf runs, no sooner than we'd get into a good trout bite, redfish would move in and completely take over. I don't know whether they were running the trout off or feeding more aggressively than the trout.

So there we'd be, catching solid trout and "BOOM" somebody would hook up with a line stripper. And these were not your average schools of reds–one guy would be reeling in an 18-incher while the angler next to him was fighting to get line back from a bulldozer. At the other end of the line I'd have two guys landing a pair of nice slot-fish.

Just so you know; I am not complaining–I just found it odd to be catching redfish from a school that included such size variations.

The reason for me mentioning this is because you will see more of my 24' Shallow Sport heading out the pass in October and November, hoping to cash in on more beach and nearshore action. Through the latter part of August and thus far into September I have spent more days chasing the silver kings and bull reds than I can remember in my 28 years of guiding.

Fishing the beachfront this time of year will give you many opportunities. You can work the birds with topwaters and catch just about every species you could ever want–Spanish mackerel, trout, ladyfish, bluefish, even sharks. You'll need to rig with a short piece of wire leader–unless you enjoy donating lures to toothy critters. The water gets a little bluer and a lot clearer this time of year, and as it cools down the snapper and other offshore species come well within small craft range.

Speaking of my 24' Shallow Sport, I am in my third one from Coastline Marine up in Seabrook and I can honestly say I have zero complaints with the boats or the service. This hull does everything they say it will, and then some. Having said this though, I am going to make a switch for 2015. I will be sticking with Shallow Sport but I have decided to give the X3 a try.

The reason for switching is to step up a bit larger–something to run big bay and nearshore chop a bit handier. I understand it will draft a couple inches deeper but I'm hoping the softer ride will open other doors. Baffin this winter–a better tarpon and nearshore snapper boat–who knows?

I will be getting with Cole and Chad Starr at Coastline Marine and Coastline Aluminum to work out aluminum fabrication and rigging ideas and I will be sure to include photos when we get it all together. I will still be set up for flats wading but with a few more aces up my sleeve. I am getting all giddy thinking about it.

October is when San Antonio Bay really starts to shine. As the fronts get stronger and more frequent the shrimp just pour out of the Guadalupe Delta country. As successive northers drop the tide levels, we'll see increased bird activity over frenzies of trout and reds gobbling shrimp.

As far as lure selection goes, you can pretty much throw whatever you like. Topwaters such as She Dogs and She Pups are usually tied to my Waterloo HP Lite when all this is going on but aggressive gulls will attack them recklessly some days. A switch to sub-surface plugs or soft plastic is often necessary to avoid them.

If you haven't tried Bass Assassin's 5-inch Vapor Shad; October would be a great time. This bait has been a solid producer for me in many situations and locations when the fish are feeding on shrimp–ship channel spoils, ICW drop-offs and mid-bay reefs. I have been stuck on the color they call Green Moon for some time now. I know I said I have been stuck on this color but honestly I feel any natural color will work as the fish can be pretty easy to fool during a frenzy-feed.