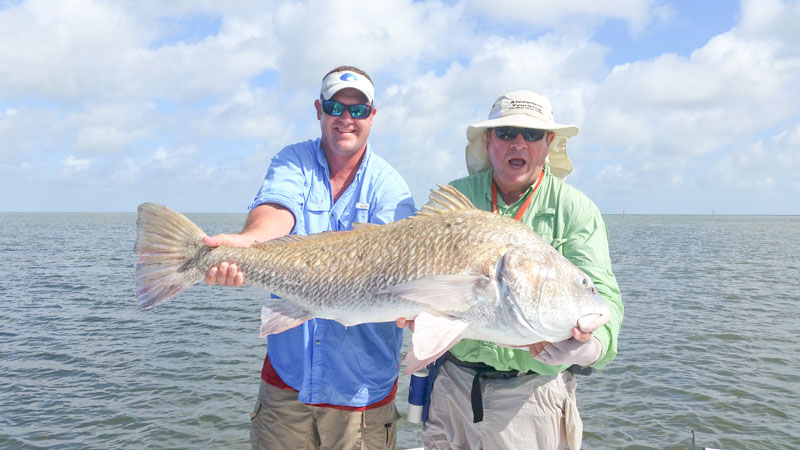 Bobby Jacob landed this brute of a black drum while wading a sand flat. His son Barret assisted with holding the monster for a quick photo before releasing.
September fishing on the middle coast has been hot in more ways than one. Even with the hot weather the fishing has been on fire! I think it has more to do with plentiful rainfall more than any other element. I would say summer 2015 has been as close to a "normal" year, weather-wise, than anything we've seen in a long time. All through summer scattered afternoon showers would develop and deliver anywhere from a quarter to two inches of rain on the bays and surrounding areas. This is something we didn't see during our long drought period and it has been a godsend.

Thus far in September we have spent many days catching trout and redfish in the surf and then moving to nearshore rigs to finish the day catching various snapper species, ling and the occasional kingfish. My Shallow Sport X3 has handled everything the Gulf of Mexico could throw at it – very comfortably, I might add.

In October you will still see my Shallow Sport X3 heading out of the pass or jetties in search of tarpon, big redfish and many other species that follow the blue water in close to the beaches. When conditions do not allow comfortable or safe fishing on the nearshore Gulf and beaches, I will point the bow toward San Antonio Bay. October reef hopping in San Antonio Bay can be almost surreal. When the wind lays between fronts the bay can become like a mirror – sometimes you can hardly tell where the water ends and the sky starts.

Another weather factor that sometimes appears in October is fog. All I can tell you is be safe and beware of other boaters when navigating. I see a lot of guys leaving in fog on GPS, I do it too, but your GPS is NOT radar. It will not show you the other boater that is idling in a channel or up to a reef, or the kayaker that just left Charlie's Bait Camp thinking everyone can see him. Be careful, be safe and run slow enough to stop in time to avoid an accident.

As far as areas of the bay and which reefs we will be fishing; it's hard to say. Just like any other fishing situation you need to find bait holding on or near the reef you want to wade. Having a few birds such as pelicans hanging around is always a good clue that bait is present.

The types of reefs I prefer to wade will have many points that jut out from the main reef. Fish love to hang out around and near points and use them as an ambush area. Also the reefs I choose will have drop-offs within casting range – just in case the fish are hanging deep that day.

The lures I normally throw at my speckled friends in October are the 5" Bass Assassin Saltwater Shad and the 4" Bass Assassin Sea Shad, and I will rig these on 1/16 ounce jigheads. The colors I choose most often in both lures are Bone Diamond and Baby Bass. Just remember the colors you choose to throw this time of year are not as important as the action that they have.

Yes, you can throw topwaters and they work very well some days on the reefs. I prefer the thump of a trout hitting my plastics but, if I decide to try a topwater while reef hopping, I generally rely on the MirrOlure She Dog in CRBL (blue back-chrome body) and the CRGR (green back-chrome body). I prefer the obnoxious rattle and bang of the She Dog because it seems to bring the fish up from deeper water along the drop-offs of the reefs and will make the trout and reds crawl across the crown of the reef to come and smash it! Again, action and sound are more important than color.

If you haven't been yet, you need to make a trip to Waterloo's Pro Shop in Victoria. It is a 3,000 square foot fisherman's paradise. They offer retail for their Waterloo gear and manufacture their rods there also. Easily accessible off Navarro Street in Victoria, now you can conveniently stop by during business hours to truly customize the rod you have always been wanting since you are able to see and feel all the different handles and actions of each rod they build. You can finish out your rod with any custom color combination so that you don't look like every other fisherman out there.