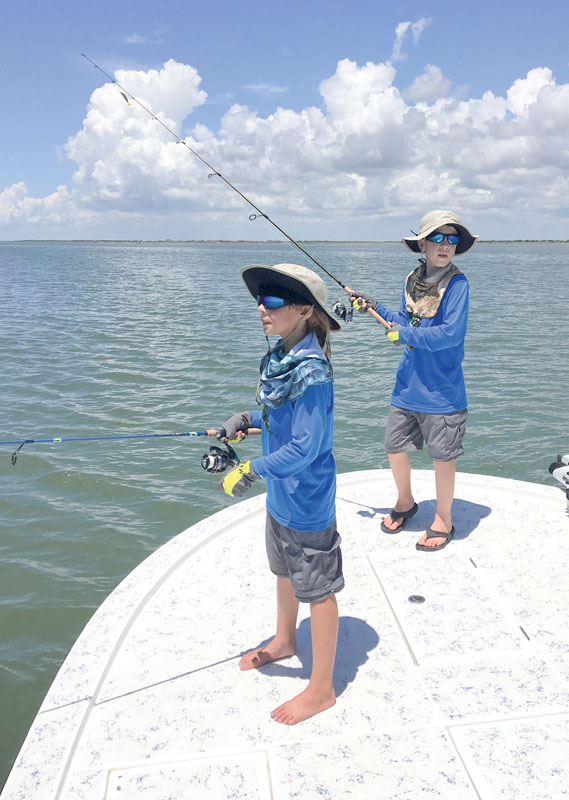 Sister and brother, Mia and Nicolas Borin can chunk hardware with the best of them.

Well we made it through another scorching summer and are officially into the fall season. Before you know it we will be talking about how miserable the cold is and we can't wait for it to warm back up so we can shuck our Simms waders. It's funny how we are never satisfied.

The fishing and the areas we fished in September didn't really change from what we were doing in August. The only change we really noticed here on the middle coast was that we did get our fall tides right on cue at the first of September. This influx of water did open up some new areas in the back lake regions that had earlier been void of fish.

October is probably the best month to be fishing here in the Port O'Connor and Seadrift areas. That is because there are so many options. You can hit the reefs in San Antonio Bay or head up toward Hynes Bay and work the birds. There will also be trout and reds in the back lakes on Matagorda Island.

Over in West Matagorda you'll see the same stuff. Bird activity up in Lavaca Bay and herds of redfish roaming Oyster Lake. Probably my most favorite area would be West Matty's south shoreline where trout will still be hanging around the bars busting mullet and hungry reds chasing shrimp out of the grassy guts.

For the guys who like deep water action you have Port O'Connor's ever popular Big Jetties. There you will have a mixture of bay species with some pelagic species to boot. It's not uncommon to catch a redfish one cast and then a smoker kingfish the next. Speaking of redfish, this is a prime month to hit the jetties and passes for a shot at a huge bull. I have seen them as long as 48 inches!

A note though for anglers targeting this bull red fishery, make sure you are rigged with circle hooks as these fish all need to be released. They are the spawners for our future bay stocks. Sure some people want to eat them and they are well within their right to tag one but I would highly discourage any angler from keeping one of these beauties. Their flesh is hardly table worthy.

Last but not least we have the nearshore and surf zone along Matagorda Peninsula and Matagorda Island. Some of my greatest trips this time of year come from fishing birds and bait within two hundred yards of the beach. It is nothing to work a group of birds and see speckled trout, redfish, mackerel, sharks and bluefish all trying to smack your MirrOlure She Dog! That's what I call action. All the while a pair of manta rays are just lazily swimming by your boat. It's crazy what you will see out here.

Of all the areas I mentioned above you will have to remember that wind direction and weather patterns will dictate what areas you can safely fish. Meaning, if you have a howling northern blowing you will not catch me on the south shoreline of West Matagorda Bay. You would be better off hitting some of the protected north shorelines. An even better choice in this scenario would be the back lake areas of Matagorda Island that offer protection from any wind. Remember a little common sense can go a long way when dealing with the forces of Mother Nature.

The lures that we will be chunking will not change from what we have been throwing all summer. We will still be throwing the four inch Bass Assassin Sea Shad (paddletail) in Mississippi Hippie and Copperhead rigged on the 1/16 ounce Assassin jigheads. I primarily throw the Sea Shad when I am wading in water less than waist deep.

When wading the deeper mid-bay reefs or the deeper guts in West Matty, I will be chunking the five inch Saltwater Shad (rattail). The reason I switch to this type of lure is because you can work the full water column so effectively with up and down hopping motion on the retrieve. All it takes is a rhythm of rod twitches. The paddletails on the other hand are more suited to straighter-lined swimming retrieves.

No matter which bay or area you decide to fish, October should deliver some of the most rewarding and memorable fishing of all the months and the cooler weather will make it that much more enjoyable.