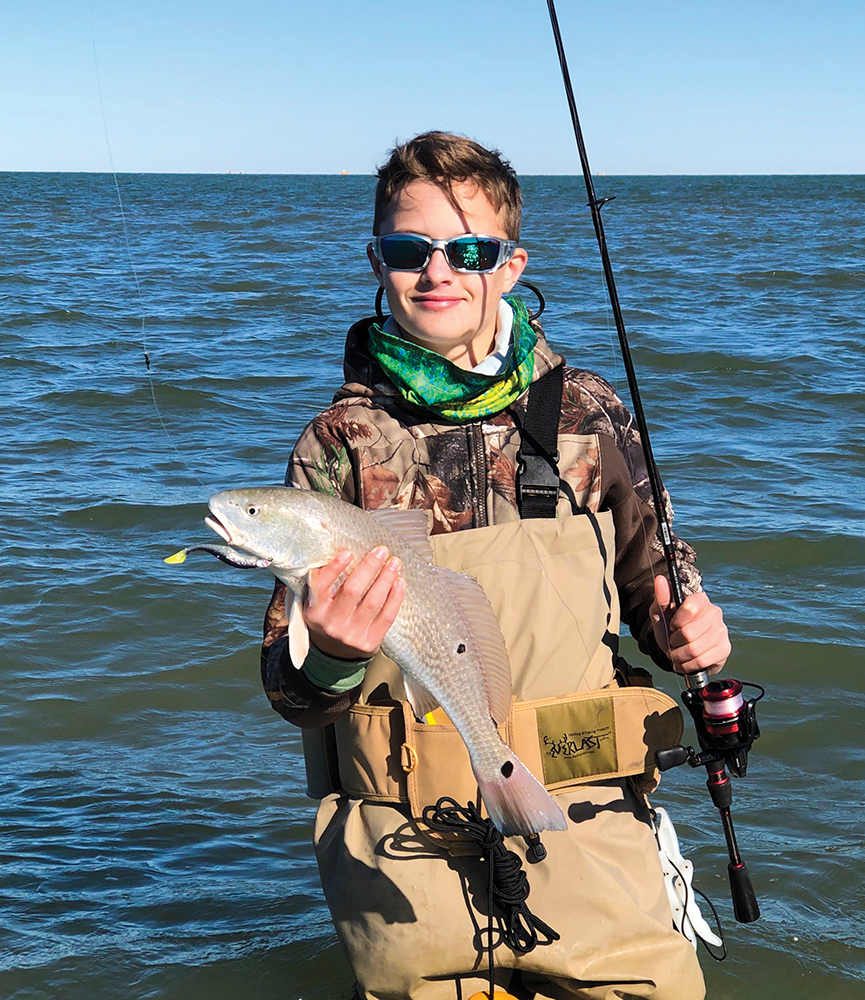 It is always encouraging to see youngsters learning the finer art of angling.

My clients and I have been enjoying stellar fishing thus far in November. We’ve had mornings between harsh fronts where there was little to no wind and were able to hop from reef to reef in San Antonio Bay. This no-wind scenario produced excellent results for specks and the occasional red, black drum, flounder, or whatever species decided to take a swipe at our Saltwater Assassins.

I expect this will continue throughout December. A major deciding factor will be the fronts becoming more frequent and stronger as we get deeper into the month. With that said, you will need a backup plan for the days with strong north wind, also during the prefrontal southerly flows.

My backup plan on windier days will be targeting the many back lakes and protected coves of Matagorda Island. My clients and I have already tested some of these areas during blows that have already happened. We have found that there are good numbers of fish in every protected area in Espiritu Santo, San Antonio, and Mesquite bays. Where I fish will be decided by angler traffic and bait presence.

There are some other deciding factors during windy conditions. One would be how safely we can navigate open water to reach protected areas. I have seen numerous Facebook posts wherein anglers tried to cross open water during a blowing norther, experienced motor trouble and become swamped, requiring a Coast Guard rescue or assistance from a similarly inexperienced angler. I think it’s better to consider the risks rather than trusting luck and carelessly making a run at it. Just my two cents.

For instance, during a norther blowing 20 to 30 mph you should not attempt crossing San Antonio Bay to reach Mesquite. Way too many things can go wrong and SAB gets too rough to cross safely in winds that high. Anglers launching from Goose Island State Park have a much more protected route than we do leaving from POC and Seadrift.

Another deciding factor is water temperature. At the time of this writing the water temps have been hovering between 65° in the morning and reaching 72° in the afternoon. Throw in a few more major fronts and you’ll be looking at much cooler water temps. With low-50s water temps, I will opt for the protected back lakes of Matagorda Island, mostly because the bait will be more plentiful there. Bait equals fish.

In the lure department, I have learned over the years to be a minimalist when packing the winter wade box. It just doesn’t pay to carry everything you own. For example; if you know you’re going to be wading shallow, grassy areas, you won’t need a 52M MirrOlure or 1/4-ounce (and heavier) jigheads.

My normal go-to lure for wintertime trout and reds is the Bass Assassin Sea Shad, rigged anywhere from weedless-weightless, up to 1/8-ounce jigheads. I let the water depth and grass situation dictate the rigging method. As far colors, I usually stick to either Magic Grass or Purple Chicken. I am of the belief that colors catch anglers while action and technique catch fish. Think about what I just said, mullet are silvery-gray and shrimp are translucent to off-white to brown, yet most anglers do not carry lures of these colors. Yes, I still believe in darks for muddy and lighter shades for clear water, though.

Another trusty pair of lures I’ll have in my box are MirrOlure’s Paul Brown Original Corkys and Fat Boys. Both in slow-sinker and floating versions, with the floaters getting the nod on the coldest days. I will also carry a MirrOdine XL in CH color. Carrying a Heddon Super Spook in bone, just in case they want something on top, is another good idea.

One last and most important tool that is too often overlooked is your fishing rod. I have used Waterloo for quite some time now and can honestly say it’s the best stick I’ve ever used. I prefer a lighter rod in general and I really like the sensitivity of the HP Lite. If I know I will be chasing bruiser reds, I will be carrying a Waterloo Ultra Mag on my Shallow Sport X3 for back up. Remember that sensitivity plus an awesome reputation for customer service are what keeps anglers using Waterloo.

In closing I want everyone to be safe and watch out for the other guys out there. Duck season along with oyster season will be in full swing. Everyone deserves a right to use the water as long as they do it legally.