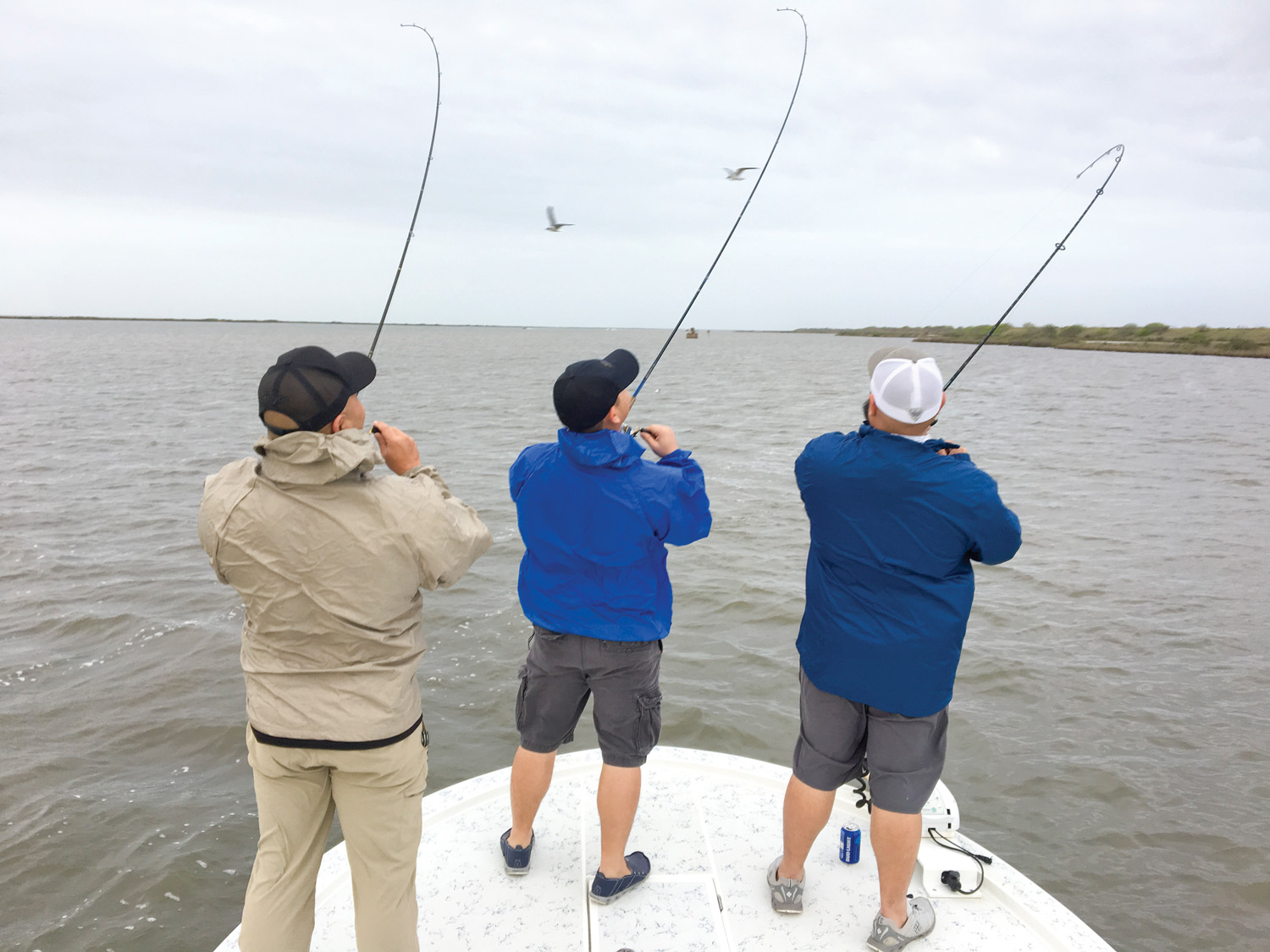 Tripled up, working a school of back lake redfish!

Since the first of the year, fishing along the middle coast reminds me of the good old days. Well – minus the boat traffic and inconsiderate boat operators, but that’s a whole other story!

In my mind, there are a lot of factors contributing to the bounty we are enjoying. For one we are getting plenty of rain locally and further up the Guadalupe and Colorado basins that feed vital fresh water and nutrients that our bay systems need to thrive. If you don’t think fresh water makes a difference, think back to the middle of summer during the drought years. Everybody thought we were out of fish.

We could catch trout during the drought in the San Antonio Bay area but the majority had retreated into the upper reaches of the bay near the mouth of the Guadalupe River. In the Seadrift area, that meant Guadalupe Bay, Hynes Bay, Mission Bay and the Victoria Barge Canal. Areas not normally fished by the average fishermen in the heat of summer.

Another major factor is the opening of Cedar Bayou, which enabled our local bays such as San Antonio, Mesquite and Ayers to receive stronger tidal exchanges.

A third major factor is 5-trout limit that was enacted in September 2014. I’m not sure the exact impact on our fishery, but think about it – how could taking fewer add up to having fewer?

It had to be done. So many fishermen nowadays are driven by social media. Never did word of fishing success spread so rapidly, and the proof was on the cleaning tables. Growing interest in C&R probably helped some, but without changing the limit the greater majority would still be keeping ten. Guides beating their chests on Facebook and message forums might have snagged a few charters, but TONS of fishermen who do not hire guides also got the message. So much for my rant on social media and justification of the 5-fish limit.

To wrap it up, fishing has been exceptional and these are the factors I believe have contributed to the rebound. Now let’s talk about what’s happening on the water.

The majority of our effort and catching has been in the back lakes off Espiritu Santo and San Antonio bays. Back lake water temps have been hovering in the 63⁰- to 65⁰ range on overcast days and 69⁰- to 76⁰ on sunny days. These are very comfortable water temperatures for trout and redfish and their forage species.

Within the lakes, we have been targeting windward shorelines, whether the wind is north or south. We are concentrating on schools of mullet holding tight to the shorelines.

My staple lure has been mainly the Bass Assassin 4” Sea Shad 1/16-ounce Assassin jigheads. Bottom grass has not been a problem yet but it’s coming.

We have been drifting with artificials on quite a few trips and doing extremely well, limiting on trout and reds on multiple occasions. Granted this takes some grinding and lots of casting, but hey, if it was too easy it would also be boring.

Main bay shorelines are slowly transitioning into normal springtime patterns and I expect the spring migrations of shad and glass minnows to arrive by the time this magazine reaches newsstands.

When fishing these migrating bait schools, look for irregularities in the shoreline configuration and bottom structure. Points, scattered clump shell or a reef, even a slough leading to a back lake.

Once a school of bait is located, work into casting range or a position to intercept them. Avoid walking right into them or they will either change direction or move beyond casting range.

I normally throw MirrOlure’s MirrOdine XL or the 5” Saltwater Assassin on a 1/16-ounce Assassin jighead. Cast ahead of the school and behind. Effective presentations will include erratic movement by twitching the rod convulsively – anything different than what it’s doing to attract game fish to strike. In other words, stand out from the crowd.

If you really want to get your blood pumping, toss a She Dog in front or behind the school and see what might happen. Some of my best topwater days have fishing schools of migrating bait in April!

There will be many opportunities for all skill levels of angling during April. Get out there and see which is right for you.