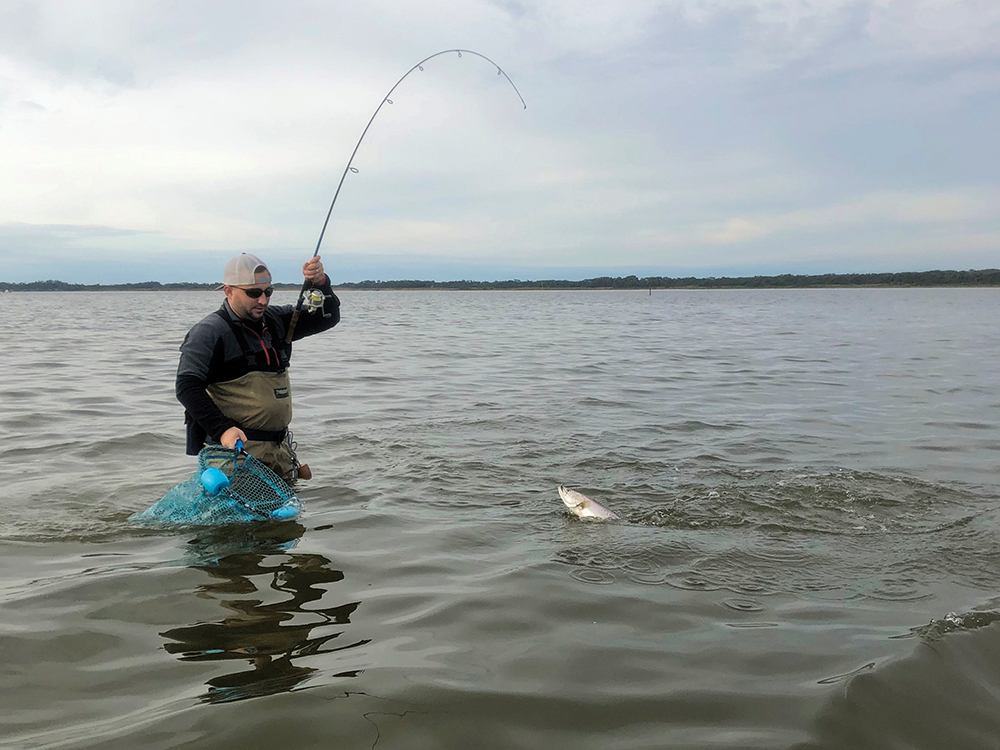 A nice late-winter speckled trout comes to the landing net.

March fishing in the Seadrift-Port O’Connor area has been nothing short of great this past month.  Writing this, we’ve had only one night when the temperature dropped below freezing and that was for only a few hours back in November. So, even though it has seemed a miserably cold and wet winter, we haven’t had to deal with freezing weather or anything even close a fish-killing freeze on the Middle Coast.

I don’t want to use the word too loosely but mild might accurately describe this past winter. Yes, there were days when you thought you might freeze to death wade fishing, but that was due more to the wind than the temperature. The water temperatures during the warm ups after the fronts were what I would call above average. My Simrad was constantly showing the shallow back lake regions in the upper 60s. Not a bad temperature for our bait and game fish. Numerous times during February I found glass minnows in trout and redfish stomachs – something we do not expect until April.

April target areas will remain pretty much the same as March. You’ll probably see my Shallow Sport X3 parked in many of the same back lakes but you might also see me working main bay shorelines, depending how early the water temps rise and the bait begins to congregate there. We sometimes see quite an abrupt transition between March and April but since the winter has been milder than average it could be more subtle this year.

We experienced a couple mild stretches this past winter when the water got warm enough to trigger April-like action on main bay shorelines – meaning that mullet left the warmth of the back lakes for a few days. And, of course, we found a few trout mingling and feeding on them.

What an angler needs to be looking for in April is the transition of mullet and other forage species from the backwaters out onto the main bay shorelines. The astute angler will fish areas of shorelines that have irregularities – reefs jutting into the bay and curves in the shoreline or small coves. Sloughs that run between the bay and back lakes also qualify as irregularities.

My favorite thing to see happening on the main bay shorelines is the arrival of menhaden that should occur later in April. This is just a suspicion but I believe trout and redfish would rather eat a menhaden than a mullet. Maybe it’s the oily nature of their flesh.

When fishing the rafts of baitfish, menhaden or mullet, pay close attention to the way the bait is behaving. What you want to see is erratic movements, weaving hurriedly away from shorelines. There is a reason the bait schools do not travel in a straight line along the shore. It is quite likely that a predator or two caused them to veer toward more open water for safety.

There will be calm days when the water along the shorelines will become quite clear and this is when your Costa fishing glasses really earn their keep. You will be able to spot reds and trout shadowing the bait and you certainly do not want to miss those sightcasting opportunities.

My daily lure selections change with the conditions but the 4-inch Bass Assassin Sea Shad will always be near the top of the list. Not far behind is the 5-inch Bass Assassin Saltwater Shad. Magic Grass and Slammin Chicken are go-to colors that I keep in my Hookset Marine over-the-shoulder box. I use mostly 1/16 ounce Assassin jigheads, rarely feeling the need for anything heavier.

Another lure that I keep handy is the MirrOlure She Dog in the CHPR color. The She Dog comes in a rainbow of colors but I believe the way you present a floater is far more important than the color.

In closing I would like to share what I consider another breakthrough for the Waterloo Rod Company. Well, it’s breaking news for me, anyway. I use the Waterloo HP Lite exclusively, rarely finding need for a stiffer or heavier action, but that’s just me. Everybody has a personal favorite.

Jimmy at Waterloo has introduced a new blank for the HP Lite that is lighter and stronger than the one previously used. In the last few months of fishing with the new blank I have noticed that I consistently get an additional 20- to 25-feet casting distance. I am also enjoying the new premium polymer Winn Grips on these new HP Lites versus my old standby cork grips. I’m not much for change but the Winn Grips are definitely my new favorite.