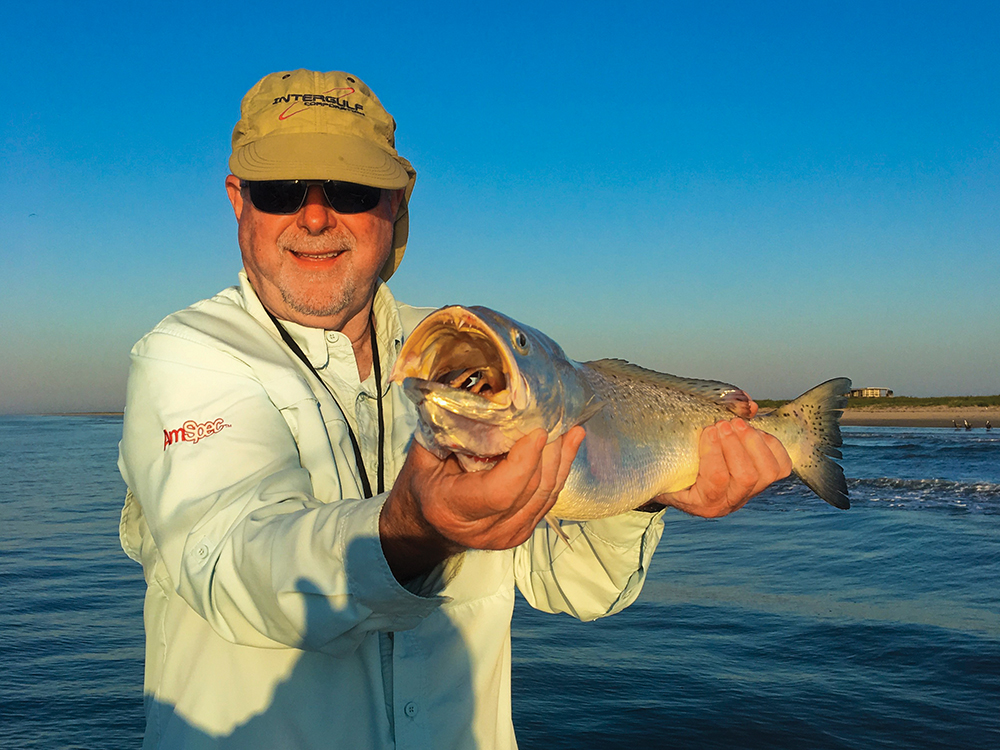 Generally speaking, at least in “normal” years, July and August weather patterns are very similar and because of this my July and August fishing strategies are very similar. Sure, lure styles and colors might change, but as far as the areas I target and daily tactics I employ, these do not really change very much. Notice the word normal in the first sentence. This summer, thus far anyway, has had its share of abnormalities.

Starting in May and continuing through June, we experienced southwest wind blowing during the night that caused tides to drop to wintertime lows as the sun rose. Low tides are okay but long about mid-morning the wind would switch and howl from the south. This one-two punch pretty much wiped out any chance to fish mid-bay reefs and sandbars, and totally shutdown any chance of getting into the surf.

During July we desperately need green incoming tides from the Gulf. These tides are a wonderful catalyst that help trigger fish to feed, especially along the major bay shorelines and near passes that I describe as “tide dependent” fishing areas.

Well, finally, as I sit here to write this column, we have begun to enjoy our normal southeasterly winds the last few days and the surf along with the bays have flattened out. It is at long last game-on here along the middle coast. We have already been to the surf and the trout and reds have cooperated as we hoped they would. Out in the gulf, nearshore platforms and other structure have yielded everything from snapper to ling and kings.

Now that we are back to normal tide schedules and the wind is back to its normal direction and velocity for this time of year, let’s get to the nitty-gritty of catching our speckled quarry.

My top go-to location for catching quality speckled trout and reds during the heat of August is the surf along Matagorda Peninsula and Matagorda Island. Some days I will be headed east out of the jetties, other days I will be headed west out of Pass Cavallo. The direction I point the bow of my Shallow Sport X3 is totally dependent on where my clients and I have been catching the most and best fish.

There are several ways you can fish the surf. Wading is one of my preferred methods. The real key to wade fishing the surf safely is where you anchor the boat. I usually try to anchor the boat between the second and third bar. In some instances, where the first gut is wide enough, I will anchor there.

Wading is a great way to fish the surf but there are other options that we will also employ during calmer days. My boats have always been rigged with trolling motors. Even my first guide boat in 1986 had a transom-mounted trolling motor. Granted, batteries back then wouldn’t last all day but we ran it until it quit. Trolling down the beach and throwing She Dogs into the first and second guts is an excellent way to pass the morning. The explosions from angry tide-runners are second to none!

Another option and perhaps the most popular nowadays is setting your anchor so that you can throw live bait toward the beach into the first and second guts. I am going to tell you right now you have to get your bait to where the trout and reds are.

I see guys every day in the surf and they are anchored way offshore, outside the third bar. Some of the guys are casting further offshore and some just throwing toward the third bar. This is where you will pick up stuff like large stingrays, very large sharks, or any number of species besides specks and reds. You need to get the bait into the first and second guts!

There will be days when it is not safe to anchor and fish near the beach and these are the days you should not try it. My rule of thumb is this: If the waves are breaking on the third bar, turn around and go back to the bay. Or better yet, if the marine forecast says the seas will be running two-feet or more, don’t even waste your time going out for a look. Stay in the bay. The surf can become a dangerous place very quickly.

August can be a fickle month due to the legendary heat of summer on the gulf coast. Get an early start, pack plenty of patience and plenty of drinking water.