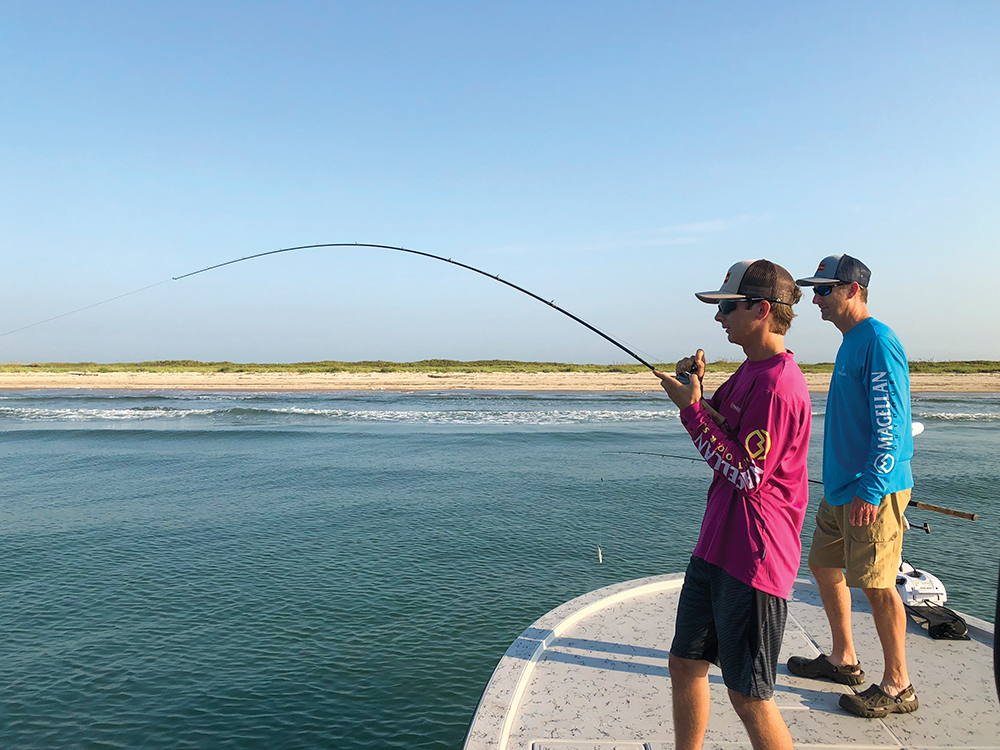 August is a great time to fish the surf!

August is generally our hottest month, and with the temps we’ve experienced through June and thus far in July it will likely hold true again this year. Summer doldrums with light to no wind and high air temperatures means fishermen need to make adjustments to stay on their quarry.

As of late-June, Shellie and I have been meeting clients well before sunrise to get a jump on the early bite. We normally launch our boats at 4:45 AM and leave Charlie’s Bait Camp well before most anglers are picking up breakfast tacos.

On my Shallowsport X3, I run a Simrad GPS/Sonar with water temperature gauge. Water temps on the flats where we begin our morning wades have been hovering in the upper-80s. Folks, that is warm, but not nearly as warm as three hours after sunrise. You do not want to be on that flat five hours after the sun is up if you can help it because most of your quarry will have already slipped over the drop-offs on the edge of the flat looking for cooler water. We also see this on mid-bay reefs where the water can be five- to six-feet deep a short distance from the shallow reef crowns.

A great alternative to flats drop-offs and mid-bay reefs lies in the surf along Matagorda Island and Matagorda Peninsula. From May to September, when the wind lays and the gulf calms, you will find the bow of my Shallow Sport X3 pointed either toward the pass and then west down the beach, or I’ll be running through the Big Jetties and turning east along that stretch of beachfront.

There are several ways you can fish the surf. My clients and I prefer wade fishing and the key to this is finding a location where you safely anchor the boat. I most always try to anchor in the second gut. In some instances, if the first gut is wide and deep enough, I will anchor my Shallow Sport there.

Another method we employ on really calm days is remaining in the boat and trolling to hunt for trout and reds. I’m a big believer in equipping boats with trolling motors for this and other fishing opportunities. Troll-motoring down the beachfront, concentrating casts in the first and second guts with your favorite She Dog is an excellent way to spend the morning. The explosions you get from amped-up tide runner trout are second to none.

Another way to fish the surf, and probably the most popular nowadays, is setting your anchor so the boat settles parallel to beach where you can throw live bait back into the first and second guts. I am going to tell you right now though, you have to get your bait to where the trout and reds are. I see anglers everyday anchored offshore of the third bar. Some of the guys will be casting further offshore and some just throwing alongside the boat. Normally, this is where you pick up stuff like large stingrays, sharks, and other species besides specks and reds. If you’re looking for specks and reds you need to target the first and second guts – period!

Granted, there will be days when it isn’t safe to anchor near the beach and you just flat shouldn’t attempt it. My rule of thumb is this: If the waves are breaking on the third bar, turn around go back to the bay. Better yet, if the marine forecast includes seas greater than two feet, don’t even go to the surf. It can become very dangerous very quickly.

I’ve narrowed my surf wading box to a handful of lures that have worked well over the years. Longtime standbys are the Johnson 3/4-ounce gold spoon and 5-inch Bass Assassin Sea Shads in darker shades – Red Shad and Morning Glory. Jighead weights depend mostly on wind and current. I find that 1/8 and 1/4-ounce get the job done most days. MirrOlure He Dogs and She Dogs in the 808 or Purple Demon work for me. Another MirrOlure that’s been getting play time is the 52MR series. I like Purple Demon, Hot Pink, and 21 (black back-white belly).

In closing I would like to recommend wearing some type of PFD when wading near a pass. Quite a few options here – inflatable or vest type – the important thing is to wear one. Currents in the passes are much stronger than you encounter further down the beach and you could be swept into deep water in the wink of an eye. I prefer not to wade near passes for this reason.