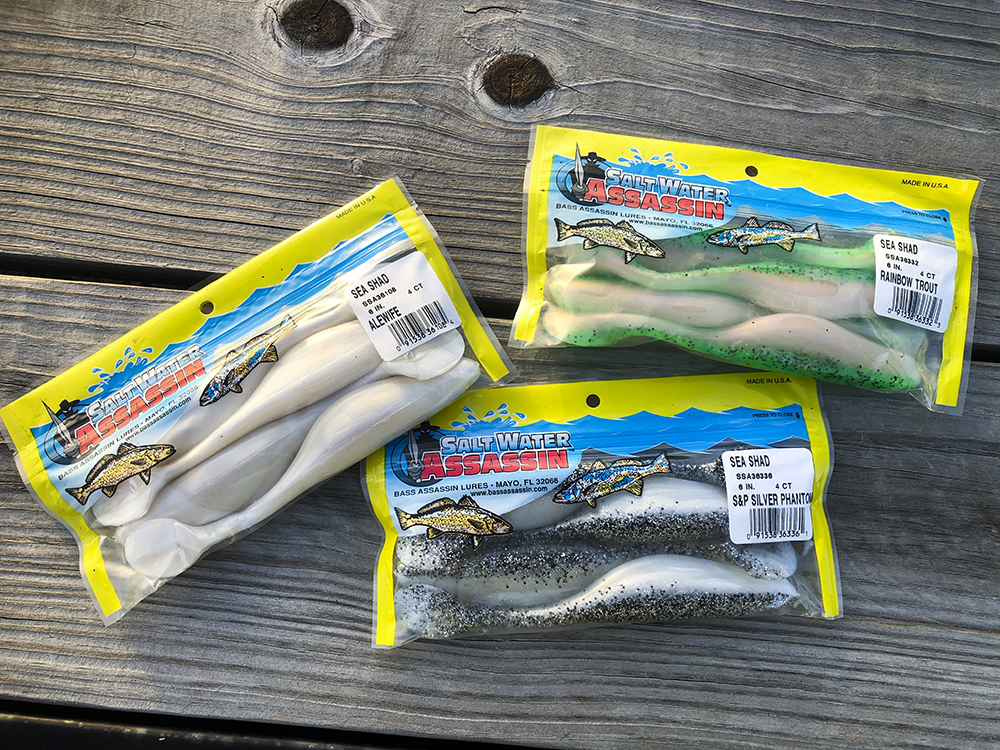 Bass Assassin 6” Sea Shads are like candy to tarpon and bull redfish.

Fishing and catching here along the middle-coast has been excellent all year. Sure, there were some days that I zigged when I should have zagged and missed a good trout bite in another area but, hey…that’s fishing. One thing that did stay consistent during the several weeks has been the wind. From about the third week of June and up until the writing of this article the first week of July, the wind has been steadily in the fifteen to twenty-five mile per hour range, even during the overnight hours it just wouldn’t give us a break. I suspect the wind will be slowing down to more normal velocities during the latter half of July and into August.

Going into August we will be planning on having light winds, barring any tropical storm activity in the Gulf of Mexico, of course. With that being said you can depend on my Shallow Sport X3 heading out through Pass Cavallo and pointing west down the beachfront. I will be looking for my friends the brown pelicans to show me to the Promised Land. The Promised Land of speckled trout and redfish, that is. There are many types of signs along the beachfront to help you locate the quarry you are seeking but I have found that I can almost solely rely on the brown pelican as my fish locator.

There are certain things I look for when I am watching for pelicans. Number one on the list is pelicans standing on the water’s edge or even swimming in the first gut. When you see this it is practically a guarantee that you will be knee deep in reds and trout unless you spook the fish off trying to get to them.

The other pelican sign I look for is pelicans diving within the first three guts of the beachfront. I will stay away from any bird action occurring outside the third sandbar because this is where you will discover some rather undesirable creatures: large sharks, giant stingrays, and a host of other toothy critters.

There have been days when I would be cruising the surf and never came across a pelican. In this case I had to depend on other signs such as seagulls or terns hovering over the first two guts, or actually seeing baitfish such as mullet fleeing from a predator.

Something else you would do well to avoid is shrimp boats working along the beachfront. Fishing near a shrimper dragging the beachfront is practically a guarantee that you’re going to be catching sharks. The sharks follow the shrimpers as they drag their nets, eating all the scraps that get pushed through the net, and also because they learn very quickly that a smorgasbord of goodies will be dumped in the water when the shrimpers cull their catch.

When the surf gets flat and you want to try something new, start scanning the surface offshore to about 400 yards. Look for birds to lead you to schools of tarpon, bull reds, sharks, and jack crevalle. My customers and I have enjoyed countless hours throwing “coon pops” at schools of rolling tarpon but, like I said, be prepared to hook up on the aforementioned sharks, jacks, and bull reds.

Tarpon will generally hit a variety of lures. We have had success with the 6” Bass Assassin Sea Shad in Chartreuse Silver Glitter, Crystal Shad, and Fire Tiger. I rig these on 1/2 to 3/4 ounce jigheads. Large curly-tailed plastics work well along with the larger DOA shrimp imitations.

Of course it’s hard to beat a large live shrimp tossed at a school of tarpon, or an eight-inch mullet drifted near the bottom or thrown into a school of rolling fish.

One thing to remember when chasing tarpon schools it to get upwind and drift toward them or use a trolling motor for the final couple hundred yards. If you try motoring in with your outboard you will push the school away and worse, you’ll get ugly looks from anyone else that may be trying to intercept the school.

Just remember, your options are almost without limit when the winds lay and the bays and gulf calm down. Be safe and courteous, and drink plenty of water because it’s going to be a hot one.