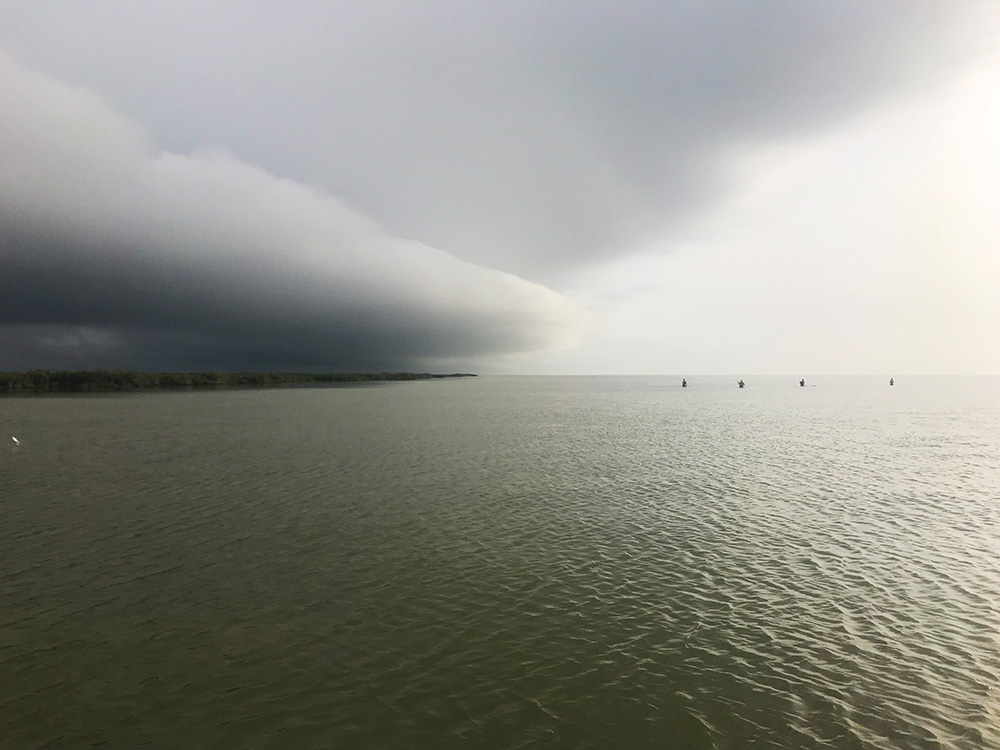 Make sure you are in protected waters when a cold front hits.

The thermometer on the back porch reads 85° this afternoon, which causes me to ponder the rollercoaster of weather we’ve been experiencing. Friday was warm with strong south breezes due to the approach of a cold front. My clients were catching solid trout with the occasional redfish mixed in. The bite was steady but I kept thinking about the cold front that was due early Sunday morning. Would we be able to find a good bite in the protected back lakes during a blowing norther? The back lakes had been okay but not nearly as productive as the main bay shorelines. Hence my concern on what would happen when the norther arrived.

The early prediction for Sunday called for northerly gusts of 15 mph when the front arrived and was supposed to settle down to a sustained 10 mph, still from the north. North wind that light would hopefully allow us to continue fishing San Antonio Bay’s south shoreline. I kept my fingers crossed.

Well, the weatherman was wrong again. As a safety precaution, we went to a protected back lake and waited for the norther to roll through. Lucky that we did; the front came in around 30 to 35 mph with lots of rain. We had been catching fish up until the front hit but the wind and rain got so bad we just waited it out in the big Shallow Sport X3.

This scenario is going to play over and over until winter finally sets in. When that happens the water temps will drop low enough to move the majority of the baitfish into the warmer waters of the back lakes and the reds and trout will follow them.

Fishing Matagorda Island’s lakes during winter requires that you use all your senses. I tell my clients to think of it the same as hunting…except you can’t see your quarry. Not normally, anyway.

Even though we cannot see the trout and reds we’re seeking, there will be clues as to where to aim your Bass Assassins and MirrOdines. First thing to look for is mullet flipping; better still is when they’re jumping and/or skipping frantically. When I see a mullet break the surface I do my best to cast to the exact spot as quickly as I can – even if it’s a good ways off. Quite often the reward is an instantaneous strike as soon as it hits the water.

When the water temps drop seriously low, like in the 50s, bait activity on the surface can become almost nonexistent. That’s when we have to rely on birds – gulls, terns, pelicans, ospreys, all of them. Even shorebirds at the water’s edge can provide valuable clues. Bird’s eyes are much keener than ours; they never miss a subtle subsurface flash or swirl.

Wading back lakes means trudging muddy bottoms, but this is where “the mother of all trout” lives this time of year. Move slowly with a skiing stride. It’s less tiresome and a lot quieter. If you can hear yourself wading the fish can also hear it. Like I said, more like hunting.

Wintertime lure selection includes my trusty Bass Assassin 4” Sea Shad and 5” Saltwater Shad. Another favorite is the MirrOdine XL. And don’t forget the original slow-sink and floating Corkys. Color selections vary day to day. Stop by the Waterloo Pro Shop, Jimmy Burns has all the Custom Corky colors in stock.

What about rods? I tell my clients that popular bass rod actions are generally not well-suited to saltwater, especially for Bass Assassins on light jigheads. Take the group I’ve fished the last six years, all hardcore bass anglers (in the beginning) who have evolved to become hardcore saltwater anglers. I let them try my Waterloo HP Lites and Ultra Mags during successive trips. Long story short – they now all use the Waterloos.

Last thing I need to mention is braided line. You need it. Saying that, I realize that braid has its quirks and some anglers experience a steeper learning curve than others. But I will also tell you that I have caught fish using braid that I would not have caught using monofilament. The ability to feel even the slightest tick at the end of the line from a cold water trout is braid’s greatest attribute.

Part of the hatred of braid stems from improper casting brake settings. Try this trick that helped during my own conversion from mono. I engaged an additional brake in my Lew’s reels. Once I got used to the feel of casting braided line I slowly loosened everything up to improve the casting distance. I really couldn’t go back to mono now that I have mastered its quirks.