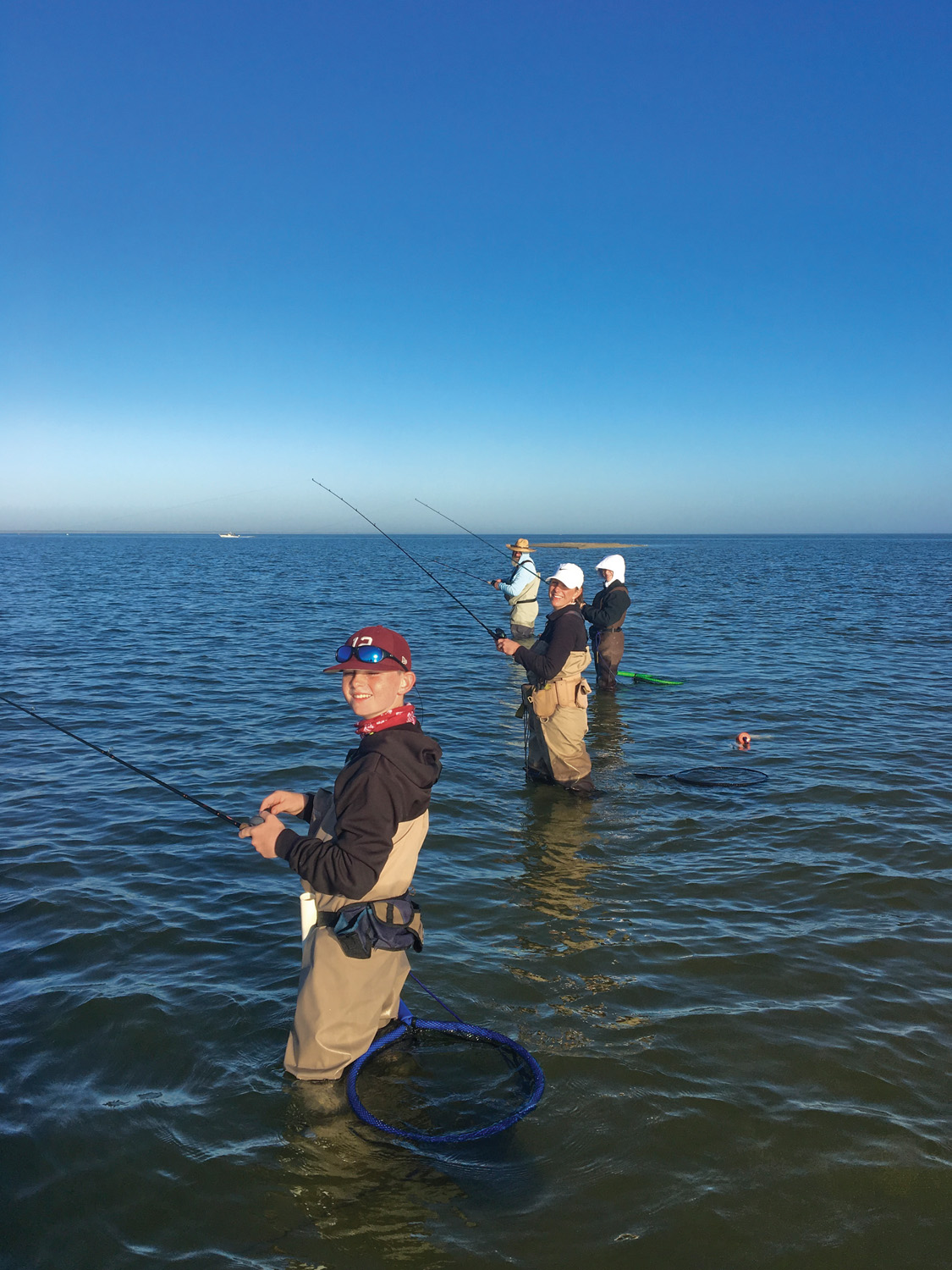 The Boedeker family of College Station thinks fishing is a great way to spend time together.

Brrrr! The latter part of December was cold and thus far January has been even colder. During the freezing temperatures we experienced between Christmas and New Year, we again had people rushing to known big trout holes. They weren’t fishing per se, they were hunting the floaters and stunned fish lying on bottom, for what I call a photo-op. Some were guides but more were just Average Joes, looking to make a showing on social media, even though they’d used a dip net and not angling skill to catch them.

One image forwarded to me showed a young man and woman with eight trout over twenty-five inches. Each of them had two in each hand, fingers up the gills, for the photo op – totally made me sick! We have laws that prohibit picking up cold-stunned and dead fish during a freeze event but even this does not stop them.

Bottom line is that being cold-stunned doesn’t necessarily convey a death sentence. Some of those fish can and will survive. Unless, that is, you run your fingers up their gills and hold them out of the water in the frigid air to make a photo.

Game wardens cannot be everywhere all the time, I get that, but when TPWD enacts a special fishery closure, places like Port O’Connor’s famed Army Hole could use a game warden presence to preclude the antics of game hogs and social media wannabes.

I remember the heyday of the Army Hole, chock-full of boats on really cold days. So much so that I remember catching a redfish with another angler’s hook in its mouth, dragging their unattended rod behind. Talk about shooting fish in a barrel!

But when you left Army Hole back in the day you would encounter a game warden, and they had a boat standing by to chase greedy anglers who would not stop, usually because they were over the limit. I saw it firsthand. Local warden David Heard (now deceased) was checking my boat at the dock when David’s partner hailed another boat for inspection. The guy responded by jamming the throttle wide open to make a break. Bouncing off the side of my boat in the process. He cut across Espiritu Santo and was seen throwing an oyster sack overboard. Retrieving the sack, the wardens found it filled with redfish, some of them undersize.

Now that the New Year’s freeze has come and gone, we are back to our normal wintertime patterns. By this I mean that during cold fronts I will focus on deeper back-lake areas on Matagorda Island. These could be in deeper parts of the lakes proper, or sloughs that feed major lakes such as Contee and Pringle. Hurricane Harvey opened a number of deep cuts into a lot of the backwater areas. Our go-to lure will be a Paul Brown Original Series Corky or a Soft Dine XL. I prefer the Original Corky for the coldest days and lean toward the Fat Boy during warming periods. Speaking of warm-up days, my all-time favorite is still the Bass Assassin 4” Sea Shad.

Other protected locations that are easier to reach on frigid days when you get the fishing itch are the harbors where you launch. Deeper than surrounding bays, bottom temperatures can be as much as five degrees warmer than the surface temperatures, and thus attract fish.

Let’s not forget the canals of waterfront neighborhoods. These hold fish year ‘round but really shine during the colder months. Always remember to be respectful of property owners also fishing these waters.

Cold weather opportunity can also be found in rivers. Trout, redfish, and flounder can all be caught in river channels when saltwater creeps upstream, especially during periods when river flow is weaker than normal. Tall bank bluffs block cold north wind and make fishing more pleasant than on open bays. In fact, you might want to seriously consider cancelling plans to cross any deep, open water bays on strong north wind days.

You’ve likely heard me say that cold-weather fishing emphasizes the need for a super-sensitive rod to feel the light tick of a trout taking your lure. My answer for this is a Waterloo HP Lite. By far the most sensitive rod I have ever used. I use this rod every day, throwing the lightest Bass Assassins, and it can even handle my Super Spooks when called upon.

Likewise, there is no substitute for braided line. I use Mustad 30-pound, it works as well as any I have tried at half the cost.

The 43nd Annual Houston Fishing Show will be at the George R. Brown February 28 through March 4. Shellie and I will be in Booth 532. Stop by to say hello and talk a little fishing.