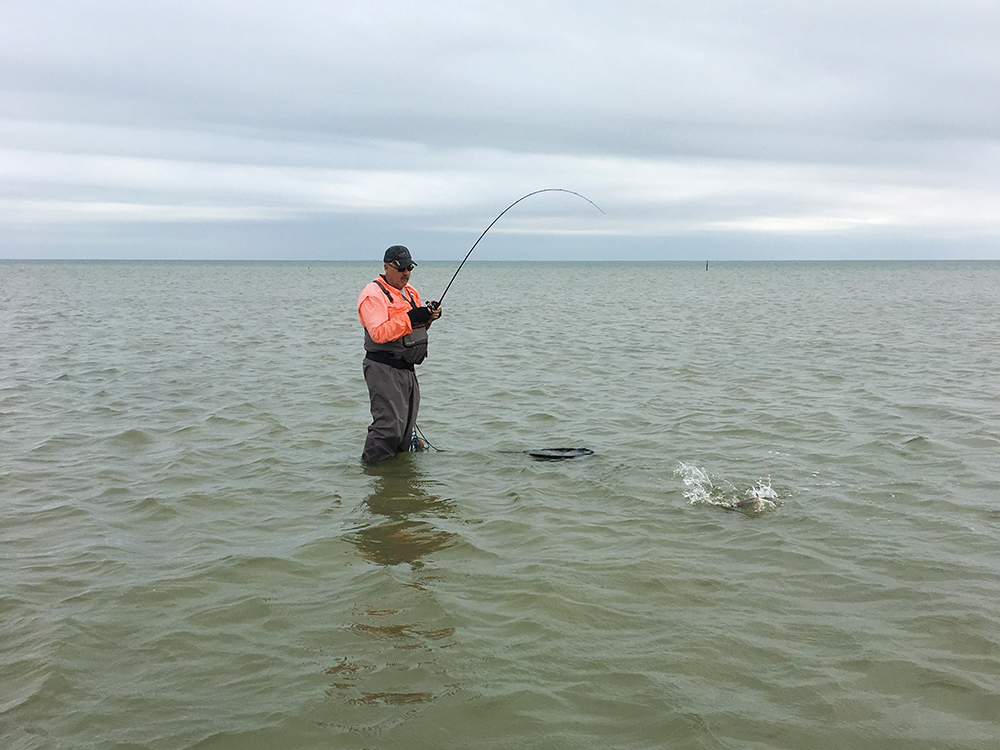 Tony Dugue getting in on some shallow wintertime wade action.

So far this winter we have been lucky that Middle Coast temperatures dipped below freezing only a couple of times, and by only a few degrees when it did. Writing this in mid-January, I certainly hope not to jinx this weather pattern, but over the last several  years you may recall that I began my February columns discussing fish kills and reminding readers that it is illegal to gather freeze-killed or cold-stunned fish.

February will no doubt bring more below-freezing temperatures and extreme low tides in the wake of strong back-to-back northers. We’ve already seen some very low tides but they only lasted a couple of days. The kind of low water days I’m talking about here are the ones that last a week or more. Some anglers become discouraged by low tides in the bays; I on the other hand would rather fish lower than normal tides than the higher tides we encounter other times of the year.

Consider this; fishing an extreme low tide narrows your hunting area as parts of the bay will simply be too shallow for fish to inhabit. If the air temperature is cold, let’s say in the 40s with overcast skies and water temps in the 50s, the trout and redfish will have little choice except to vacate and avoid most of the traditional flats habitat. They do this mostly because of the lack of something to eat more than the fact that shallow water remains so cold during overcast periods. But, as soon as the sun begins to show, it’s a completely different ball game.

Extreme low tides complicate navigation. Quite often my clients and I will stop to help another group get their boat off a shallow section of a boat lane that is used regularly with normal tides. The hapless captain will invariably say, “I don’t get it. I ran through here last week with no problems.” Another classic is, “The tide chart said we would be at high tide right now.”

February anglers would do well to observe the water level at the boat ramp before launching. But unless you launch at the same ramp often and can accurately gauge the height of the tide, how could you know what is normal for that area?

My best advice is to scan the pilings and bulkheads. You will see barnacles above the waterline but these can be evident in some amount even on “safe” tides. During winter, though, if you can see eight to ten inches of green algae exposed, you’re probably launching into an extremely low tide. And guess what, the routes you navigated last week may land you high and dry today. It’s not rocket science.

And about that tide chart comment; after several days of north wind blowing the water out of the bay, the last thing I would trust would be a tide chart when deciding whether to attempt running across a shallow flat. There is no substitute for paying attention and using common sense.

When I encounter extreme low tide days with overcast skies, I begin thinking about heading to deeper water areas that are protected from wind. I think about deeper drains leading to back lake areas – the old north cut into Pringle Lake, the old cut into Contee Lake, or the new center cut into Contee that Hurricane Harvey carved to an eight foot depth. These are but a few; there are myriad possibilities down along the south shoreline of San Antonio Bay.

I concentrate on these deeper cuts and sloughs to take advantage of the warmer waters down low in the deepest sections. It may be only a few degrees but it can make a huge difference.

So on this cold and overcast day, once I’ve made a decision to fish a certain drain or slough, it will be difficult to detect presence of bait because they too will be snuggled into the warmer thermocline near bottom with the trout and reds.

I will generally start with my all-time coldwater confidence bait, MirrOlure’s Paul Brown Original Corky. You will likely have your own confidence bait and that’s what you should throw. I will say this though, if you are not getting strikes, do not be shy in switching to another bait.

Absent any reasonable action on the Corky, the next lure on my list will be the 4” Bass Assassin Sea Shad rigged on a 1/16 ounce Jighead, worked slowly and methodically along bottom. Another good choice would be the MirrOlure SoftDine XL. If this doesn’t produce, I’m headed to the next deep slough.