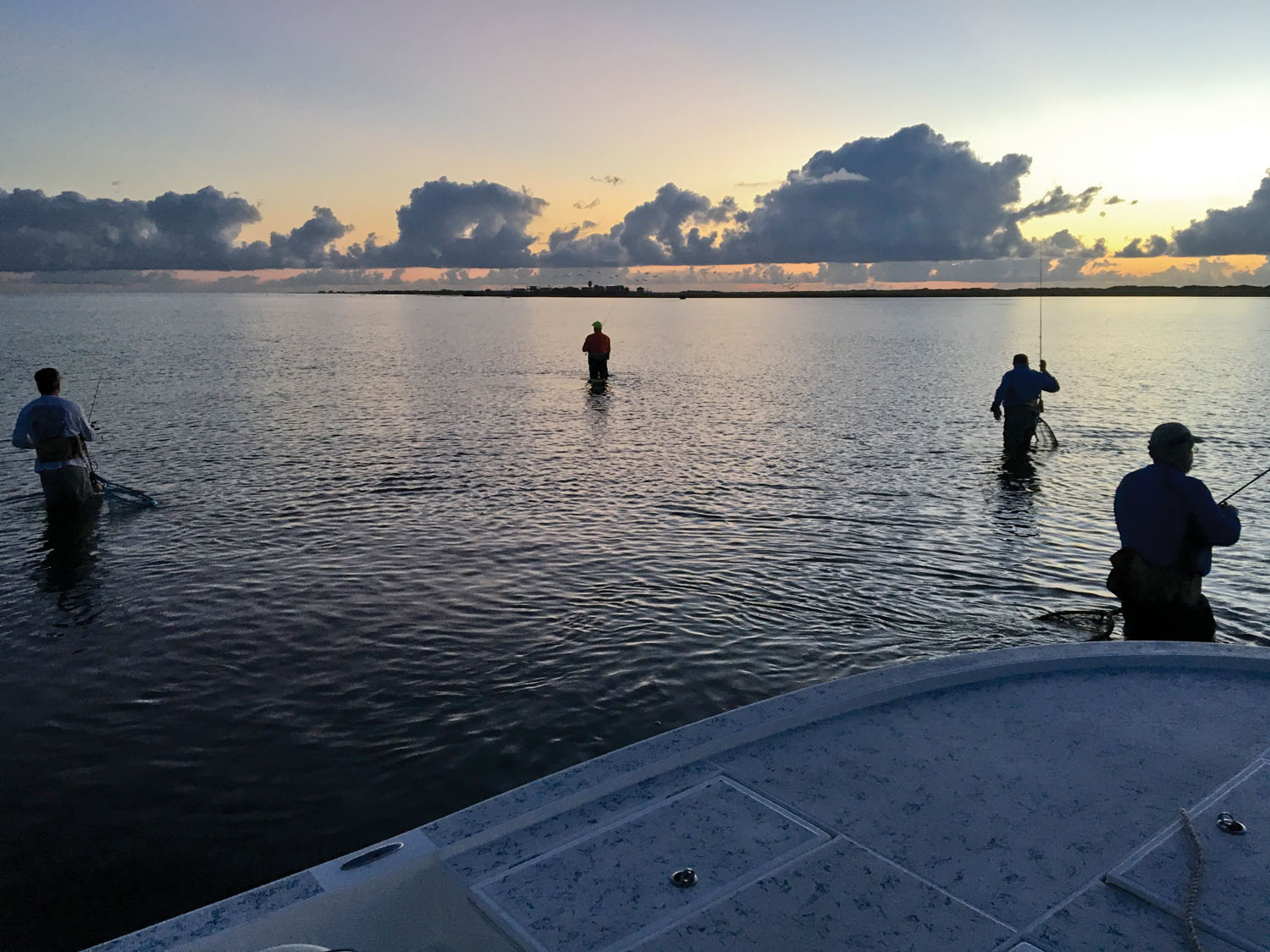 We all dream of calm conditions at sunrise – but too calm can be as challenging as too windy.

We cannot control the wind. On a daily basis, it tells us where and how we can fish and the best direction to approach the areas it allows us to fish in. The wind dictates the direction of our drifts, and when blowing hard enough, the direction we will be wading and casting. Nothing controls our fishing, and our catching, as much or as often as wind.

On a recent charter, I was met with a light NW breeze at sunrise. I had been seeing and smelling slicks every morning coming from a shoreline drop-off that is known for great trout fishing this time of year, but unfavorable wind had prevented me trying it for nearly two weeks. With the surprise of the light NW breeze, I scratched my plan of returning to the reef that had given our three-boat group easy trout limits the day before.

My three anglers showed up early and eager as their group always does. They were situating gear in my Shallow Sport X3’s massive storage areas when I informed them to just hang on to their stuff – the boat ride would be short. Within five minutes we were easing over the side.

Scattered slicks were already popping. We worked the area thoroughly, throwing everything but the proverbial kitchen sink. After nearly an hour without so much as a tap on my Assassins I headed back to the boat. I rounded up the guys and apologized for wasting their time. One of them reassured me by saying, “Hey with all that bait and slicks popping, I would have stopped there myself.” It made me feel a little better as I reimplemented the original plan.

Everything looked perfect as we arrived at the reef. Current was running and slicks were popping. The light breeze allowed wading and casting in any direction. One hour later – not a bite!

I was going over everything in my head, comparing the past few days of fishing, the only thing I could come up was the lack of wind. I loaded everyone back up in the X3 and headed for a reef with a sudden, deep drop-off. One of my go-to areas during high-pressure fishing.

We spread out over the shell, two of the guys probing the drop-off. The other angler and I went to work on a huge raft of mullet on top of the reef. As we waded along we began discussing the events of the day up to that point. He recognized that all the things we needed for a great day had been present at each stop, and I agreed.

I mentioned how slick the water was and that we really needed a little chop on the surface. The words were barely out of my mouth when I felt the thump I had been waiting for. I landed the first fish of the day at 9:50 AM. The weight was still squarely on my shoulders but I had at least caught a fish.

Heading to the boat, I noticed one of the other anglers landing a trout. Okay, that’s two, but at 10:00, not good!

I picked them up again and headed across San Antonio Bay to another no-name reef. I told them we are going to aim small and hit smaller areas until the wind came up, believing we needed some rippling on the surface for them to bite. Crossing the bay I mentioned to the guy beside me that the birds that had been working all over the bay the day before were nowhere in sight. Had to be the lack of wind.

As I got to my top-secret reef there were three guys already there, and loading up – nothing on their stringers. We finally had wind beginning to build from the south as I allowed the boat to drift to the far end of the reef. Not much, but enough to ripple the surface.

I could still cast into the light breeze but it was building. Ten casts into the wade I hooked a healthy speck, next cast another. I called to the guy behind me to come alongside and we were soon greeted with a bite almost every cast. The other two moved in closer and we enjoyed a solid two hours of catching and releasing before I waded back to the boat. They were still catching as I brought the boat up.

They thanked me for a great trip and one mentioned he was never worried because I never wore a worried look. I replied that I thought we were around fish on every wade; they just weren’t in a feeding mood until the wind got up. On the way back to the dock the birds were working just like they’d been all week.

So, next time your cussing the wind, remember that lack of wind can be just as challenging.