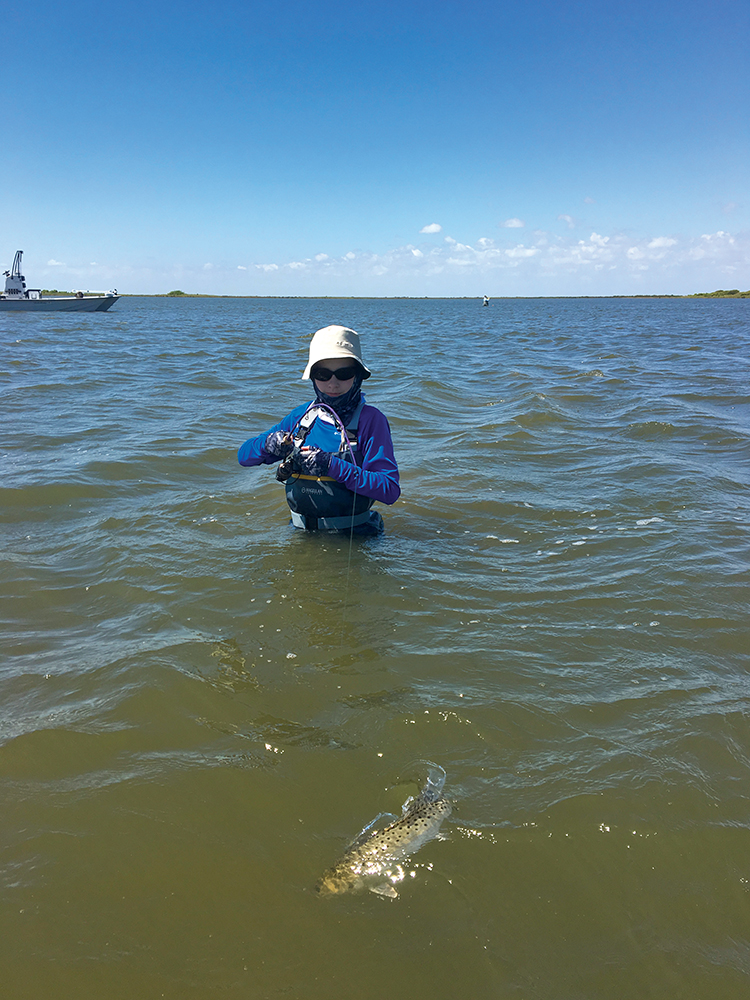 From what I have been seeing here lately on the middle coast, I would have to say Mother Nature is about a month behind her normal schedule. My dad, who built and runs Charlie’s Bait Camp, is struggling to get decent sized baitfish (croaker). The croakers are averaging only about two inches and by the second week of May they are usually three inches or better.

As of the second week of May, I still haven’t noticed the presence of more than a few menhaden in our bays. I normally plan my wades on shorelines where these menhaden raft and follow the contours of the shorelines. Instead, I have had to continue my search for wading spots based upon larger mullet presence.

Another source of forage that has been relatively scarce are the finger mullet. I am not sure why the baitfish migrations are behind schedule but I would bet that Hurricane Harvey and the two major freezes we suffered here on the middle coast could have a lot to do with it.

What affect does my bait theory have to do with fishing patterns? As far as I can tell, it has not hurt any of the normal trout migration or feeding patterns. I have not had to downsize my lure selections to “match the hatch” as they say. I am still throwing the same lure I would be throwing if the normal baitfish presence was occurring.

As far as our annual trout migrations, they seem to be right on schedule. The size of the bait in the area hasn’t seemed to change where the trout are or where they are going to feed.

While the baitfish size and presence may be lagging behind schedule, believe me, the trout size seems to be ahead of schedule. We are regularly releasing fish over twenty-five inches on our wades throughout the major bay systems. There are shorelines in all our major bays that are holding trout that are no smaller than twenty inches. I have also had days wading where we never caught an undersized trout.

Over the past two weeks I have fished three different bay systems and what I have found is that West Matagorda, San Antonio and Espiritu Santo bays are all heavily stocked with solid keeper trout. Areas where I’ve had the most success always had larger mullet present and always have patches of grass and rolling sand bars. During one wade session, while throwing at a grassbed about four feet in diameter, I caught four trout between nineteen and twenty-two inches and missed another. I had one of my clients join me and he snatched two more of the same size from the same grassbed. I’m sure that lesson of throwing at the patches of grass on a shoreline will stick with him from now on.

Now, I am writing this article for the month of June, and we know what June means to my fishing program – SURF! In the next few weeks you will see the bow of my Shallow Sport X3 pointed to the surf every chance I can get. There are many reasons that I choose to make the run to the surf rather than staying in the area bays.

First and foremost would have to be the attitude of the reds and trout that we catch in the surf versus the same species we catch in the bays. Surf trout and reds are far more aggressive than their bay-bound brethren during the sultry summer months of June, July and August. The water in the surf is more oxygenated and remains cooler than local bay waters.

Redfish have made a strong showing in the surf over the last couple of years. In past years we would catch our limits of trout and then go searching the secret grassbed-laden bars further south hoping to get in on some redfish rodeos. Well, those days are gone. More times than not we have to make a move to get out of a ravaging school of hungry reds to go finish out our trout limits. What a terrible problem to have.

If you’re still feeling frisky after catching your reds and trout, head off the beach about 400 yards and look for birds working. If you’re lucky you may stumble upon schooling tarpon, along with a mix of jack crevalle and bull reds.

Whether you decide to head to the surf or plan on staying in the bay during the month of June, you should be pleased at how our fishery has blossomed into one of the best on the Texas coast.