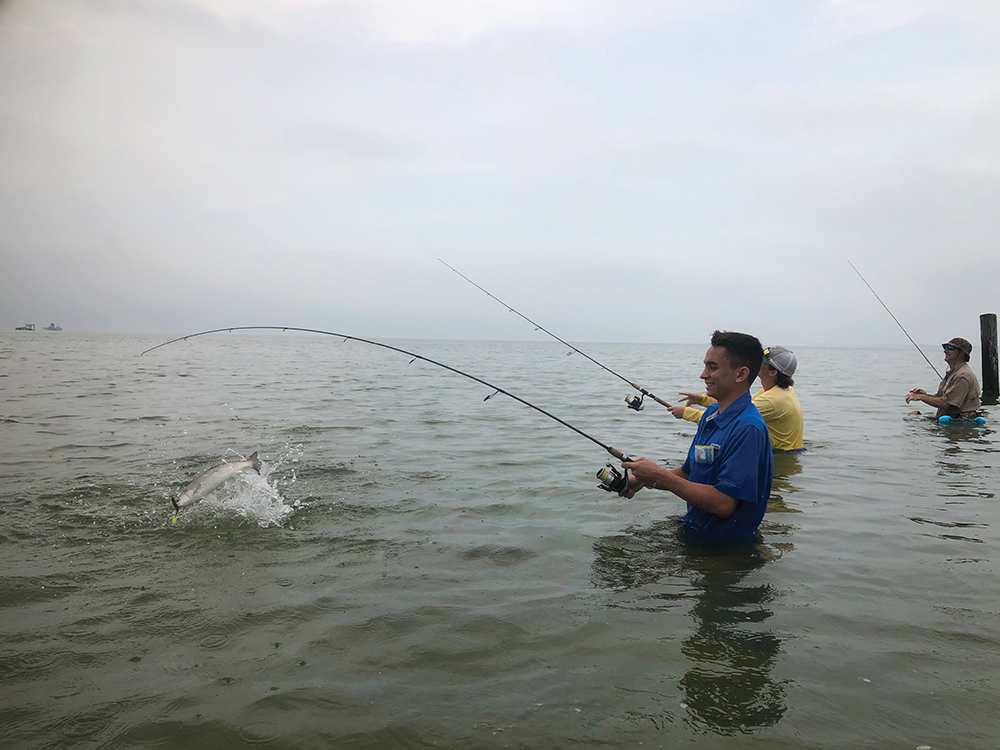 First time waders having a great time in the water.

There are probably going to be a lot of guides and outfitters writing about Coronavirus this month. I have decided not to do that.

Springtime fishing thus far in the POC/Seadrift area has been nothing short of spectacular. Sure, we’ve had slow days due to boat traffic or horrible wind, but they were few and far between.

The fishing should hold steady during the month of June. As of the second week of May I still have not noticed the annual migration of menhaden that normally takes place this time of year. I normally plan my wades on shorelines where these menhaden schools follow the contours of the shorelines. Instead I have had to look for daisy-chaining mullet along certain shorelines.

I wouldn’t say Mother Nature is behind schedule, (like she has been the last few years) but something has changed as far as the menhaden migration that we normally witness this in this area this time of year. I’m not sure if my fellow anglers have noticed a change in the migration, or if they even care. I for one am a “menhaden chasing fool” this time of year.

I confess I love chasing rafts of menhaden. I believe during this time of year the trout that are about to spawn or have already been spawning depend on this oil-rich food source to replenish their systems that have been drained by spawning. I believe that the menhaden provide more protein than other baitfish such as mullet or pinfish. Don’t get me wrong, I also know if the menhaden are not present the larger trout will not hesitate to eat a large mullet.

The menhaden migration may be getting off to a slow start but it hasn’t affected the fishing. It started in late March with water temps rising earlier than normal. The glass minnows arrived early and kickstarted our main bay shoreline fishing.

Further evidence of great fishing can also be seen in the slow-motion videos on social media of heavy stringers slung over gunwales…give me a break! Another social media tactic of late is carrying well over a limit in a fish bag and dumping them on the deck and then videoing the release. Really? Is your ego that fragile? If you are going to release a fish, take a photo or video and release it.

Okay one last pet peeve. The guy that drags his or his customer’s trophy fish (that should be released immediately to enhance its chance to survive) back to the boat for a picture…in front of his boat! I am seeing more and more of this and it’s not what we should be teaching our anglers. Handle with care and release ASAP if you truly care about the fishery.

Like I was saying, all the major bay shorelines have been producing quality trout and redfish on a variety of lures and natural baits. Over the past several weeks I have been wading West Matagorda, Espiritu Santo, and San Antonio Bay. Each one has its place on my go-to fishing list because of the way the bay lies and what effect boat traffic will have on them. West Matagorda is great on the south shoreline and can handle a lot of traffic and still reload with fish. But let the wind switch from the steady south-southeasterly direction to east or north and you can pretty much write it off.

San Antonio Bay has been great on the south shoreline but this shoreline cannot handle much boat traffic before the fish shut down. The mid-bay reefs are also holding quality fish if the winds stay low and they can handle boat traffic pretty well. It’s just a matter of finding the right reef with the right size fish.

The lures that have been working in May should continue to produce into June. For me and my clients, topwaters have been paying off for the hardcore surface plug enthusiast but the tried and true 4” Saltwater Assassin Sea Shad in Purple Chicken and Magic Grass have been paying greater dividends rigged on a 1/16-ounce Assassin jighead.