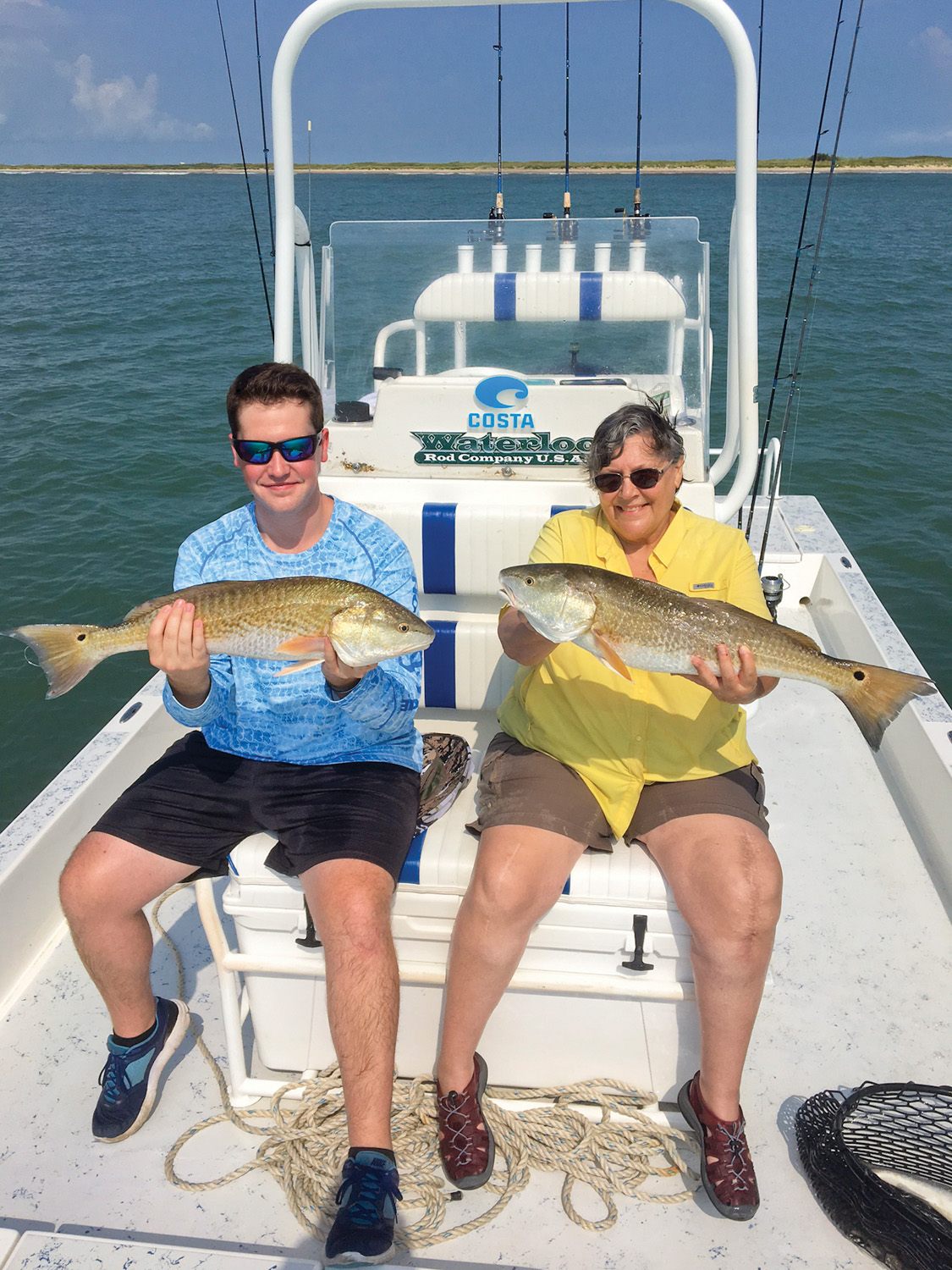 Lisa Schroeder with nephew Ryan – double-teaming the slot reds in the surf.

Here in the Seadrift-Port O’Connor area, Shellie and I are feeling blessed. It has been eleven days since Hurricane Harvey made landfall near Rockport. We boarded up our new home the day before the storm and loaded up our horses, dogs, and boats and ran for the hills. Literally.

We ran up to Shellie’s mom’s house in the Schroeder area – and come to find out that is exactly where Harvey was headed.

Our first reaction Saturday morning was that we came through in good shape – and we did – except for a big oak tree that smashed Shellie’s Suburban, and Fancy, Shellie’s oldest mare. Poor Fancy was struck by another fallen oak.

These seemed devastating at first but nothing compared with what folks in Rockport were dealing with, and later, the flood victims in Houston and further east.

On to the fishing and what it should be like in October.

I expect our fishing will take off right where it left off before Harvey. There should still be hefty trout in the surf and tons of slot and oversized redfish. Redfish are usually the primary surf species in October.

Something you will notice during October will be the huge rafts of mullet migrating through the passes from the bays to the gulf. These huge bait schools are where you need to concentrate your efforts.

Beware the jack crevalle! A horde of marauding jacks will definitely put the kibosh on a good trout and redfish bite. Seems they’re frightened of being eaten, too.

For the remaining days of September and all through October, the majority of my fishing time will be spent in San Antonio Bay. The Guadalupe was running at flood stage but not for a very long period. I believe I will be able to work around any fresh water problems – especially if the river continues to drop over the coming weeks.

On light wind days I will be targeting the many reefs that lie north of the ICW. Beginning in October and continuing through winter, SAB’s reef can be absolutely dynamite.

Pre- and post-front windy days will find us tucked along leeward shorelines where feeding gulls and pelicans indicate the presence of baitfish and gamefish. Usually the mouth of a drain or a back-lake entrance.

When fishing around these migrating baitfish I like to start with an obnoxious topwater such as the MirrOlure She Dog in bone or anything with chrome. I work right along the edges of the rafts swimming by. Sometimes the water gets clear enough this time of the year that you will actually see the reds and trout swimming under and around the baitfish, which adds to the excitement. If they are not hitting the topwater I switch to a sinking bait like the MirrOlure MirrOdine XL. I prefer any color combination in this lure as long as it includes chartreuse. I believe lots of flash is important when the water trends toward clear this time of year.

Another great option that my clients and I take advantage of during the fall months are the sight-casting opportunities that become more prevalent because of the swollen tides. Sand flats that normally have only mere inches of water covering them will often be a foot deep or more, where schools of tailing redfish and black drum will feed actively on small crabs and shrimp. I don’t care who you are, this type of fishing is always exciting.

Many brands and styles of lures can draw strikes from tailing redfish but my favorite by far is the 4” Bass Assassin Sea Shad in the Copperhead color. I rig it on a 1/16-ounce Assassin Jighead. It is just heavy enough to make an accurate cast with but still light enough to have a small splashdown when it hits the water, not startling wary reds rooting around in the sand and grass.

When running area bays and waterways on your first time out following Harvey, I strongly advise slowing down and exercising greater than normal caution. Keep a constant vigil for changes in the bay bottom, formation of new sandbars and storm debris clogging access channels. With a storm of Harvey’s magnitude you can expect to find pieces of piers and pilings just about anywhere.

There will no doubt also be some changes to the reefs in open water. Formerly safe passages between reefs may now be clogged with shell dislodged by the powerful wave action. We should also find new cuts through reefs that will provide opportunity as the tides sweep bait through the openings. Take your time in learning the bays again, who knows, this hurricane may have been just what our bay system needed after many years without a thorough flushing.