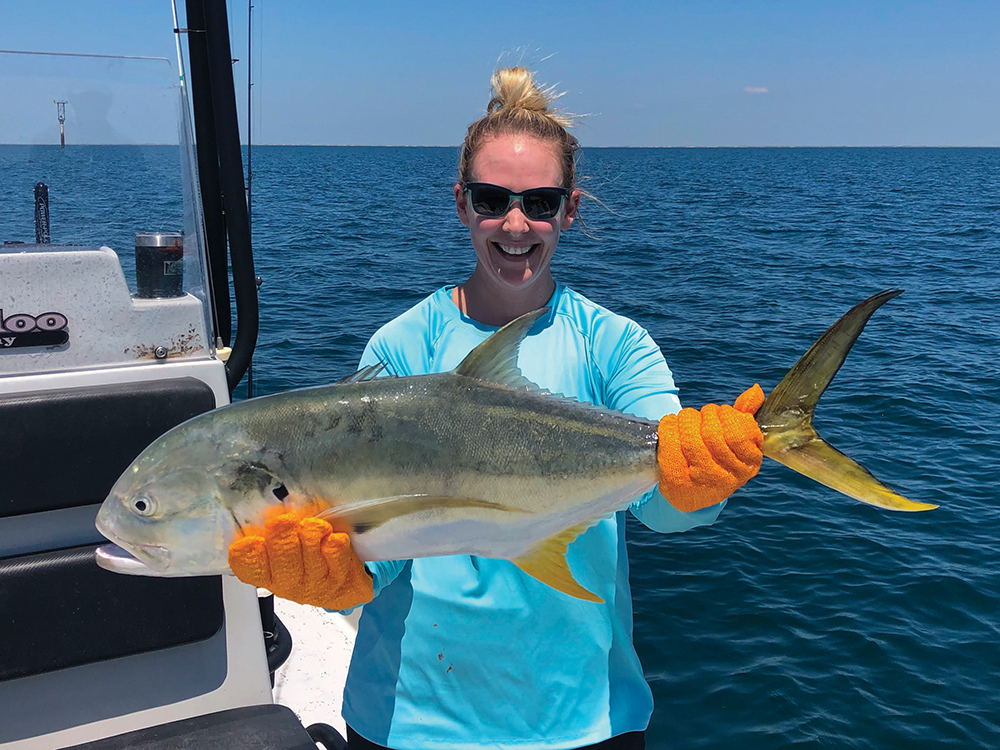 Chelsy Williams with her first jackfish on a surf charter.

I sometimes have difficulty deciding what to write about. Quite often it’s “Oh Wow!” moments of recent charters and related tips to pass along. This one is about a trip with two fathers and their twelve-year-old sons. I had taken them last year and we enjoyed a truly stellar trip.

I suspected I might be in trouble when Dad One phoned to book a two-day trip this year. What he didn’t understand, even though I mentioned it numerous times that day, we’d enjoyed a record-book trip and luck had definitely been on our side. Even the boys errant casts that landed in the mangroves were met with crushing strikes when their lures were jerked loose and landed in a fish’s mouth. The dads fished with more focus and seemed to understand the importance of placing casts near structure…or so I thought.

So, during the call with Dad One a couple of days before this year’s trip, he informed me they would like to get their limits of reds early and then practice catch and release the rest of the day. I again reminded him that our success the prior year was hardly normal, but I’d do my best to make it happen again.

They showed up late the first morning. All the other boats had already left the dock; seems the line at the taco shop was longer than expected. Dad Two remarked, “Not many boats for a Saturday.” That’s when I had to break it to him that everybody was already out fishing.

They finally got all their stuff in the cooler and climbed aboard my X3. This group is not into wading, which meant we had to find fish we could catch from the boat. Lo and behold, there were boats already fishing all the spots I had hoped to target. To make matters worse, places with no boats that had been holding good numbers of redfish had already seen plenty of boat traffic.

By 11:00 am we had only one red to show for our morning’s work. One of the sons was sitting on the front ice chest pouting over their lack of success. Just when I was about to pull my hair out, thinking we’d be headed in with only one fish, I noticed a small group of terns working low over the water. The flock wasn’t large, maybe only fifteen birds, yet even with boats drifting nearby, none of them seemed to notice. I told the guys to reel up and get ready.

I cranked the MinnKota trolling motor, explaining there might a school or reds under the terns. Almost within range, one of the guys fired a cast that landed short and ended up getting run over by the Shallow Sport. Miraculously, even after getting that fiasco sorted out, the terns were still working. Back underway and coming into range, I stuck the Power Pole and suggested everybody get ready on the big front deck of the X3. As luck would have it we had found a school of reds that averaged twenty-four inches.

We worked that school of with numerous hookups and, remarkably, none of the other boats were taking notice. Even the dip net coming out never got their attention. We continued this for about two hours, moving between small flocks of terns that would occasionally form and point the way to another school, until we had eleven redfish. When it appeared we were going to end the day one red short, I spied a lone tern and trolled toward it. Bam! We got a double hookup, released one, and called it a day.

While cleaning their fish, Dad One asked if they needed to leave the dock earlier tomorrow to get their limit earlier, they were eager to be headed home as early as possible. I just shook my head and reminded him how lucky they’d been – two trips in a row.

The terns working the schools of reds had been the key to another productive outing. Without them it could have been a long grind for only one redfish. Praying for another miracle tomorrow!

These guys are the perfect example of the up-and-coming generation of what I call, “instant gratification anglers.” They could have used the experience of a slow day as a teaching tool. Catching a limit is a bonus to the opportunity to witness the beauty of nature and to spend quality time together. Instead, they were fixated on an early limit and totally missed the teaching moment.

Oh, by the way, this is not the topic I was planning to write. It is, however, what came tumbling out of my head.