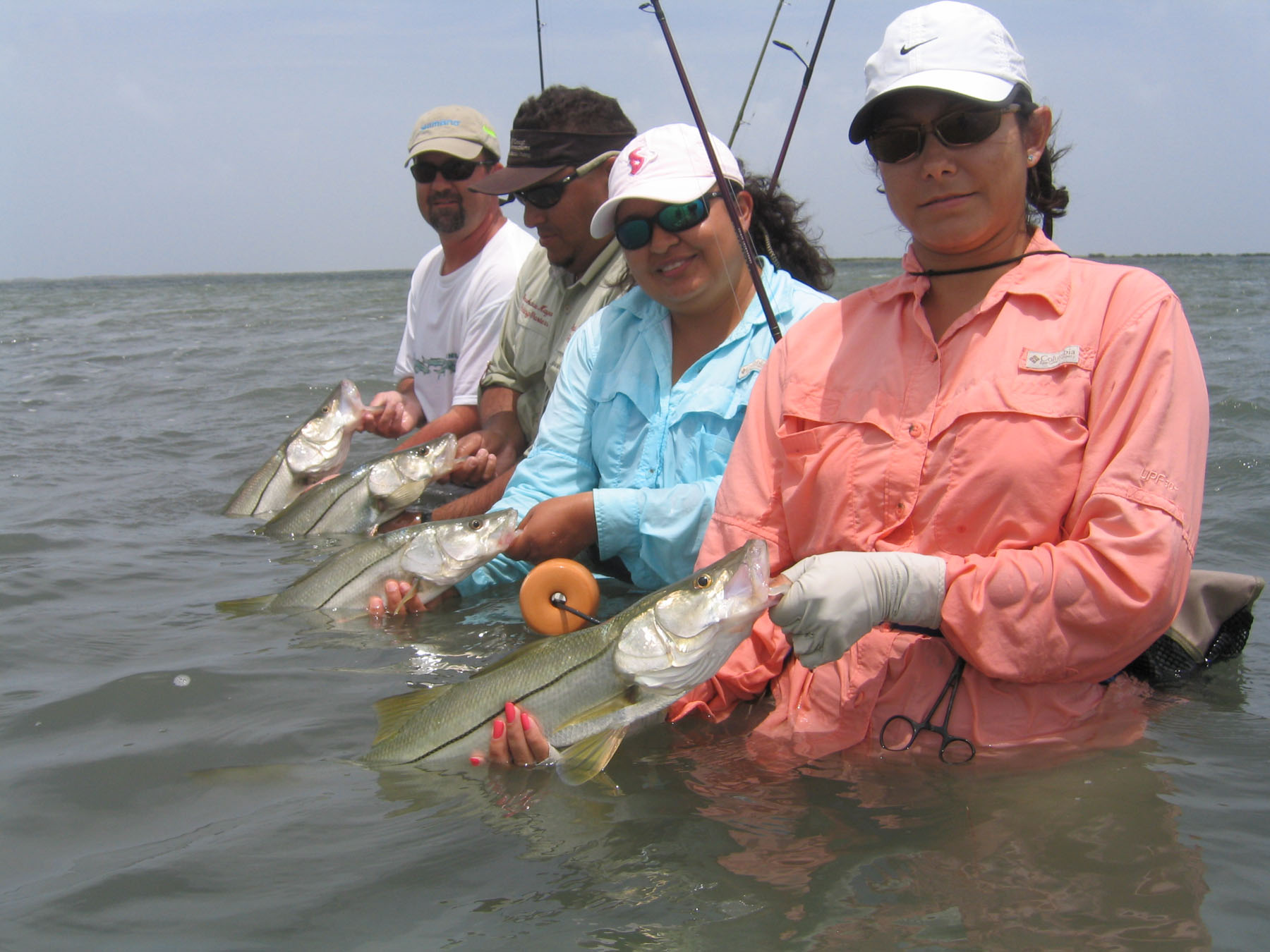 The snook bite was on for these anglers.

The month of August quickly reminds me of tropical storms and hurricanes that intensify out in the Gulf of Mexico. It was not long ago in the month of August; I was sitting on the boat taking a break from a fun day of kayaking the back lakes of the Laguna Madre with my son when I received a phone call from a friend wanting to know some information on a boating matter. As we talked for a few minutes, he figured out that I was out on the water. He probably thought I was crazy because at that time a major hurricane was predicted to head straight for us. Here I was enjoying the addiction that I so much love when I should have been boarding up my home and preparing for the big storm. Instead, I was exploring new areas that were now accessible because of the higher tides and catching big fish in areas you would never image fish would roam.

The fish were tight on shorelines and ever so busy seeking out their next meal. It was this same day in August that I caught my limit of reds without ever casting. How did I do that? I was on a kayak paddling through once exposed areas that were now filled with water and holding huge redfish that bared their backs out of the water. The best part was they didn't even notice I was there. A kayak allows not only quick mobility but the stealth to get really close to fish. I was able to stalk redfish and get close enough to dangle my lure in front of their hungry eyes. As these massive redfish took off with my bait and made strong runs, they managed to tow me behind through the shallow flat.

Such experiences can occur in the month of August because of the high influx of water in our bay systems that storms may cause. Most of July was spent fishing deeper holes due to extremely low tides. However, in the month of August this is not so; quite often tropical depressions start to develop or move thru the Gulf of Mexico bringing plenty of water into our system. The yearly return of hurricane season can sometimes be deadly and certainly a nuisance for folks near the gulf, but for our bays, the influx of new saltwater into our system plays a major role in keeping our system in a vigorous state. All this new water brings new life and refreshes our bays and back lakes that were once stagnant. These once stagnant waters now become the home of millions of eggs and fry from all sorts of marine creatures that stand a chance of survival in the back lakes, marshes, and creeks of the Lower Laguna Madre.

The August high tides allow redfish to pod up in good numbers on sea grass beds rooting for crabs and tiny shrimp. During the early morning we tend to target flooded shorelines and then move to slightly deeper water as the activity begins to slow down along the water's edge. Our choice of bait early in the morning will be topwaters like Super Spook Jr's, but as we move to waist-deep water, the small sea devils from Brown Lures in amber and chartreuse will be our preferred bait. Working potholes is a sure place to find a predator ready for a drag screeching fight. In addition, try to remember areas that you fished and had good success during the spring season high tides as these patterns will return with the stormy high tides of August.

Down on this part of the coast, floating grass will continue to be a problem. We have somewhat alleviated the problem by using single hooks on our topwaters as my clients have now gotten accustomed to using without doubting they will lose fish. Single hooks have saved many days, even in the grassiest situations. Calm mornings will be the norm this time of the year making it easy to locate rafts of mullets which will usually attract plenty of game fish.

I do have to say that the fishing for the past two months has been incredible; lots of big fish have been caught and released. Wading waist-deep water has been the most productive in catching quality fish. A recent trip that comes to mind is the day I fished three regular clients out on the bay with no boating pressure around us all day. The day got off to a slow start, but one of the guys did land an oversize red. Before heading to the next stop one of the clients mentioned he wanted to catch a big trout. My thoughts were, "Any other orders? Please state them now before we leave." We had not been on big trout in a while, and I didn't have a clue where I could find one to his specification. However, I had been on good redfish and lots of them. Away we went to our second spot. Before the guys jumped off, I instructed them that there were fish to be caught here, but it meant we had to work to find them. I commented that we would have to wade from here to there which was a little less than half a mile. As they waded, it all started well by them catching a few keepers and lots of little trout, enough to keep us interested and going forward.

When we reached a dead zone, I walked back to the boat to bring it closer so the guys could take a break from their long wade. As we drank and ate some snacks, I heard comments like, "Hey, so and so say's there's no fish here; why don't we try another spot."

Again my thoughts were held back, and my response to that comment was, "I know there's fish here. All conditions show they are here; we just have to work to find them." By now the negative comments were working on my mind, and I started second guessing myself before we took another plunge. I told the guys we would walk another fifty yards. If there was no bite fifty yards past the boat, we would get up and go to the next spot. It wasn't thirty yards past the boat that their best fishing day ever would be found.

We got into a solid school of redfish and trout that had us busy for a solid two hours. Double and triple bent rods were the norm. One lucky cast by the least experience angler of the group managed to hook up on a trout of a lifetime. She went twenty-nine and a half inches and weighed in over eight pounds. After the bite came to a halt, the guys were showing signs of wearing down so we decided to call it a day. Before we left, I did respond with a comment, "Aren't you glad I followed my instincts and decided to stay put."

My client's response was, "I'm sorry I second guessed you, and that was certainly my best day of fishing." If there is a lesson to be learned, go with your prior knowledge and gut feelings; sometimes you may be wrong, but not on this day.

The month of August will require for you to take a close look at the weather before heading out. Think shorelines early and waist to belly deep later in the day. Large schools of redfish will roam the flats in the month of August, and chances of finding tailing reds in the back bays are very possible. In addition, tarpon fishing will be near its peak down here. But, don't be like me; make sure you prepare for the storm before you follow your addiction. Remember, big storms bring high tides and big fish.