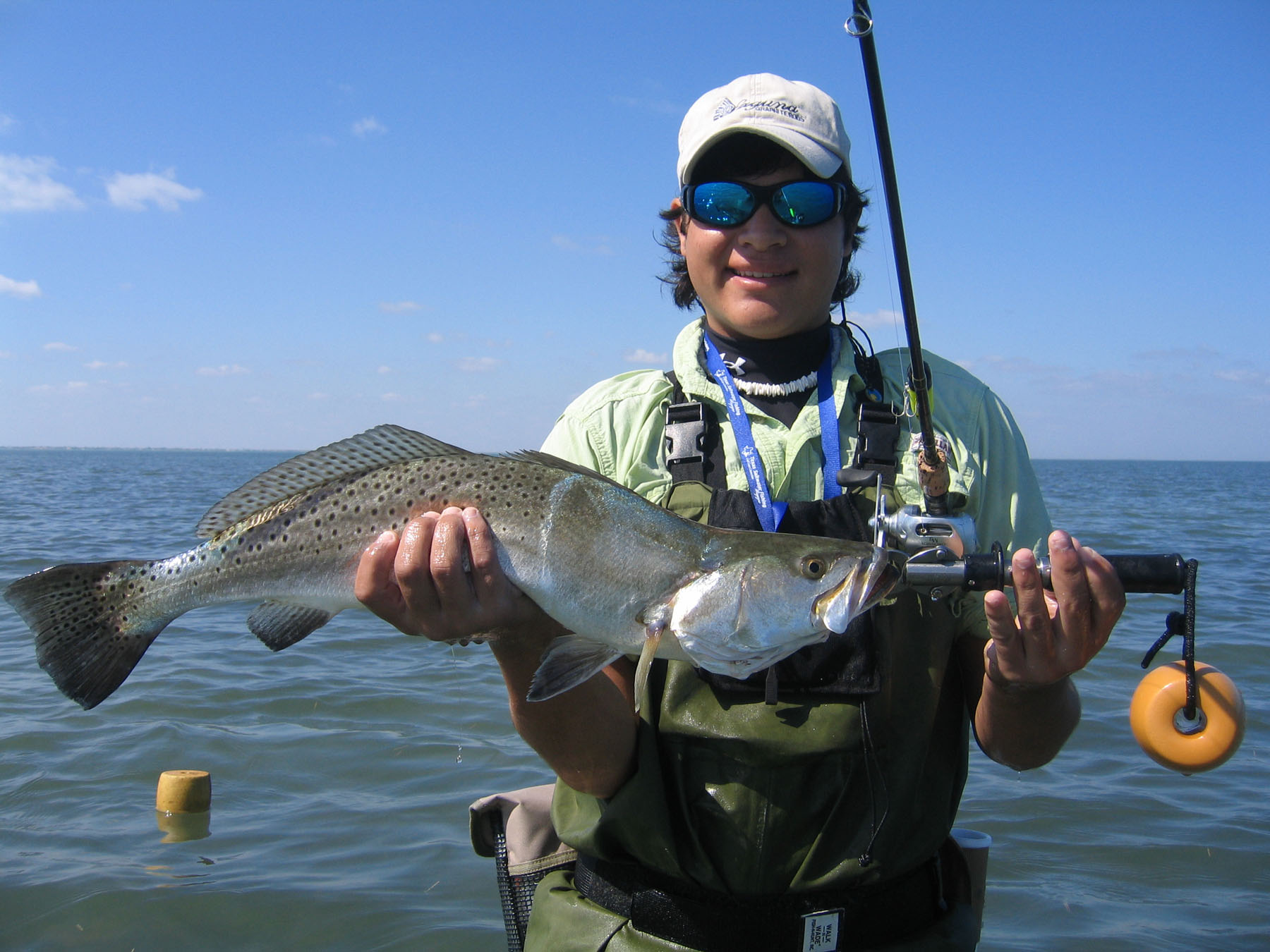 Aaron Cisneros found a few aces laying in mud.
The month of March continued to bring the usual high winds that are so common for this time of the year. As I write, the winds outside are howling up to forty miles an hour. It’s just something we have to deal with and attempt to learn how to fish the not-so-ideal conditions. By no means am I saying go fish forty mile per hour winds; however, you will not always have southeast ten to fifteen miles per hour, especially in April. Fish still eat in windy conditions, but no doubt, windy conditions do make it tougher to find the right water clarity. Remember, trying to locate fish in not-so-perfect settings is a learning experience that will payoff in the future. And besides chasing something that is elusive makes it even more rewarding when the catching is done.

April is no different than March as far as wind is concerned; expect most days to bring breezy conditions. It’s a good thing to do some searching or scouting during breezy conditions. Find out which of your local areas hold their clarity the longest despite windy situations. There are a few areas in our bay system that can stay clear to semi-clear even in the windiest of conditions. Knowing which waters remain fishable despite breezy conditions can help save the day.

Extremely windy conditions can be a foe, but at the present time it is a welcome ally. As of this writing parts of the Lower Laguna have what looks like a brown tide episode. Being that the predominate winds for this time of the year will come out of the south or southeast, it means all this wind will bring clean gulf water into our bay system. As a result of this water movement, our bays will begin to clear up and allow us to see what is really below. Our water levels will also rise this month; therefore, giving us access to back bays that will be soon be flourishing with tailing redfish chasing juvenile shrimp.

April is a month that springs up life on land as well as in the water. Look for fish to be very active in the highly oxygenated water and the influx of pinfish, ballyhoo, and skipjacks along with blue crabs and scores of mullet. Piggy perch have already turned up in the stomach contents of the redfish and trout we are cleaning. In addition, during and after the month of April, you will begin to see more stingrays. Pay close attention to the rays; they can sometimes have redfish and trout lagging behind looking for scraps.

Also, color changes and streaks will occur with frequency in April. Color changes can be great spots to fish because trout and redfish will use the darker side of the water to hide and ambush their prey. A clear indication that gamefish are present in a color change is baitfish tail slapping on the water’s surface as they escape hungry predators. Whether you are drifting or wading, I would suggest staying on the transitional line throwing your bait to the darker side and working it toward the clearer end. Sometimes a school of larger mullet will cause the water to streak especially in shallow sandy or muddy pothole areas. I have had great success in the past while jumping off the boat and fishing these streaks. I tend to throw darker colors or even an amber colored Brown Lures sea devil in these types of conditions.

There is no doubt that fish in April become very active because of warming water temperatures and the increase of bait activity on the flats, but sometimes they can develop lock jaw. This is when patience and perseverance will pay dividends. I bring this up to share with you a recent trip with two very good fishermen that wanted to target big trout. Before they jumped off the boat, I gave them an idea of the area they were about to fish and pointed them in the right direction where three big trout were landed on the previous trip. Off we went on a big trout quest.  I went deep, and they headed shallow to the magical spot. On their first wade they spent a good four hours covering no more than fifty yards. These guys covered just about every square foot of the water at least four times. The conditions were perfect, but the bite didn’t start with a bang. After a long wade and no results, I personally thought the trout had moved but not these two guys. They stayed at it even when I went back to the boat.

From the boat I could see they were finally into some decent action, but I didn’t realize how big their trout were until I picked up them up an hour later. We left after the bite tapered and returned to the very same spot two hours later.  Again their patience and meticulous fishing effort paid off. Once more they were rewarded with big fish. Not too many fishermen would have endured as these two did. Most would have given up like me and gone back to the boat and on to the next spot. Let me point out that all this was done in knee to thigh deep mud. Patience and perseverance will on most occasions bring great results if you’re willing to put in the time and effort.

In March, Corky baits still brought much success for us, but starting in April you can bet that a topwater will be the first thing that hits the water for us.  Experiment with different sizes of surface plugs to find the size the fish prefer. If it’s extremely windy and choppy, it would be wise to use bright colors like pink or orange surface bait for visual purposes.  Remember April might be Fool’s Month, but the fish don’t fool around in April… they mean business!