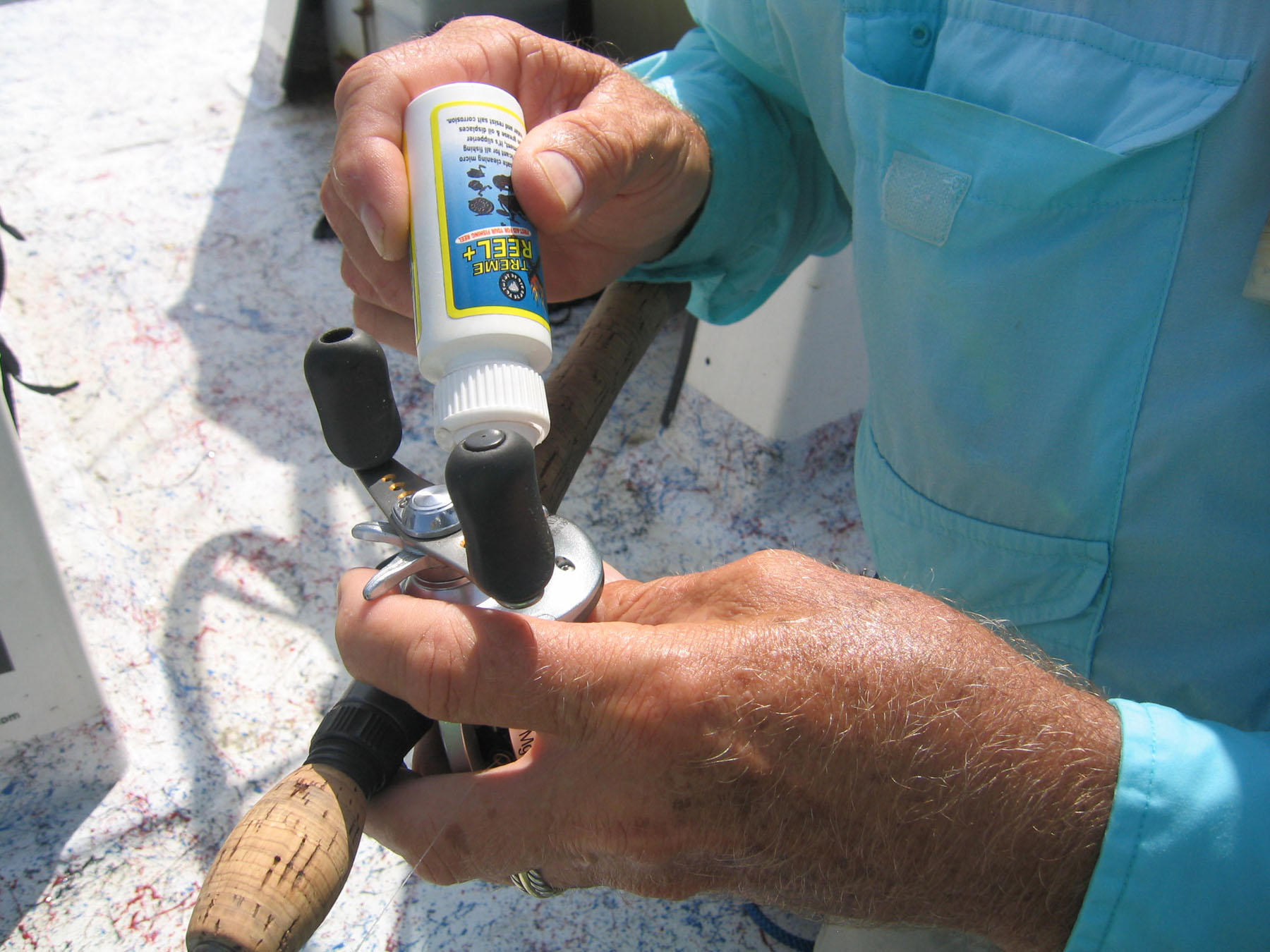 Xtreme Reel Plus is a must in your tackle box. (Can be purchased at FTU.)

We left the dock at dark with not another stern light in sight as we scooted across a shallow flat. The night air was filled with the noticeable aroma of fish slicks. There was no telling how many mullet would be getting their last glimpse of the moon, never to see another beautiful sunrise on the Laguna Madre. I had been experiencing the same aroma every morning for more than a month with the only difference being the names and faces onboard. One of those mornings inspired this adventure and story.

During the last two months it seems that our tides have been running hard, dumping out in the evening, causing the bait and gamefish to move to deeper water throughout the night. This drop in water level caused mullet ball up in tight schools. I'm pretty sure a feeding frenzy was taking place in the stillness of the night. Sure evidence of another night feed was visible in the slicks that popped up under the moon's brightness.

By keying on the movement of the baitfish, we positioned ourselves in the face of the oncoming traffic. There were hundreds if not thousands of mullet milling, jumping and scurrying for their lives. Much the same as a US Customs Inspection Station is positioned at a point of entry; we assembled ourselves where the flow was heaviest. Our inspection instruments were topwaters with sharp hooks. The pattern of bait movement was very recognizable and among them were hordes of big, hungry gamefish that seemed to enjoy inspecting our topwaters. Let me tell you, these fish were as defiant as they come.

On to my point of "Fishing the Highways," in my mind I like to visualize the area that I am going to fish with all the water gone. The bottom contours would be easy to identify if they were exposed. We can never drain away all the water, but by wading we can gain a better understanding of the locale and it helps us locate otherwise undetectable humps, drops, and mud or shell bottoms to name a few structures that could hold fish. I have heard others compare the bay to a pasture. The cows tend to travel the same path over and over again unless something causes them to change their route. Evidence of their routine travel can be noted in the worn paths their repeated footsteps create. I am not much of a hunter, but I know this also applies to deer hunting. Hunters that recognize signs of deer movement can bring great success to their hunt. Just like the hunter, fishermen can learn to look for signs of well-traveled highways that fish use in their daily travels. Many times these same pathways are used as they move at nightfall and sunrise and also to escape the heat of summer or the cold of the winter.

When people travel, where do they congregate along the roadway? It is usually at restaurants, gas stations, or other stores. At the mall it is usually at the food court. In fishing, gamefish will follow the movement of bait. Tidal movement will cause bait to move as will sunlight and wind. Temperature is also a key element when trying to find concentrations of bait. Is the bait holding shallow early and then deeper later in the day? Is the bait over shell, mud or grass? Have you ever noticed at particular times of the day the bait is very active, then suddenly nothing moves as if someone turned off the lights? The bait is usually still present but has gone down in the water column. Another thing to ponder is what travel route is the bait using at daybreak, midday, or late evening? Are they using grass lines, bank lines, channels, off-colored water, or perhaps holding in potholes? These are a few examples of water highways that fish or bait may use. It may take some time and careful studying of these patterns to find fish highways. Studying tidal flow is a key element when placing oneself at the right time and place. Do know that fish don't spend all of their time feeding just like we don't spend eight hours at the table (unless you're like me). But, fish are opportunistic feeders, and if an easy prey swims inches from their jaw, they are apt to take a bite out of it. Of course there are exceptions when you can't get even a piggy perch to nibble on your lure.

Spending time on the water and not just reading articles in the comforts of your sofa will bring you better results. Each time out should bring a new learning experience. Not all trips should be measured on the numbers you caught. I have probably learned more and certainly worked harder on tough days than on days where the fish were willing to jump in the boat. I have mentioned this before and it merits mentioning it again. Keeping a log of your trips is critical; the information may not bring immediate results, but the rewards will follow in the future as you begin to recognize patterns from your log results of each trip.

Fishing the Highways is what has brought us recent success. On a recent four day stretch with the same client we experienced a good morning bite on a strong incoming tide along a grass line marked by a gut (Fish Highway). Bait was thick up until mid-day and then everything would shut down. We made a decision to go in during the slow period and return later when the tide was ripping out. Upon returning to our morning spot in the evening, we found the bait using the same route to make an exit. Good choice, because we experienced a good bite that had been lacking through the hottest part of the day. We used the tidal flow to our advantage and set up our wades along the highway that the fish were using early morning and late evening. Learn to use the Fish Highways during peak solunar periods or when traffic is congested, which is a good thing, right?

Lately it seems rain has become commonplace up and down the coast and down south has been no exception. Since Independence Day it has been raining everyday here in the Valley. The amount of freshwater in our bay system has certainly made for some tough catching days. Nevertheless, we always have fun. One recent group that I had the pleasure of fishing with was the Texas Lady Anglers. What a fun group to fish with! The amount of learning that took place was immeasurable. I will not write about it, but if you know one of their members please ask them about the shark incident. Warning - you could die laughing. Congratulations ladies for a job well done.

Another party I would like to mention had all to do with the water but nothing to do with fishing. I had the pleasure in taking out Professor John Anderson from Rice University and graduate student Davin Wallace. Their task for three days was to collect core sediments from the Laguna bottom, which would give them historical information on the impact of hurricanes on the Laguna Madre. It was hard not being able to fish, but I did learn a lot about the formation of our Lagoon thanks to John and Davin.

September is sure to bring rain and desirable cooler temperatures. Another sure thing will be the vast amount of forage that will be available and able to show you where you need to be. Learn to read the maps of the bays and familiarize yourself with the major highways that fish will most likely use. The more you familiarize yourself with a new town the faster you learn the best routes. Well, the same applies on the water. Now is a good time to take a vacation and start learning the major highways of the water. The best part is that every bay system has its own fish highways. So get off that couch (rest area) and hit the road, excuse me, I mean the water.

On a final note I would like to mention a few words about a product that is a must in your tackle box. I fish with a Shimano 50Mg and it was recently cleaned but I wasn't getting the casting distance that it should deliver. I was about to give up on until my trip with Joe Meyer (FTU) and Capt. Ron Shepherd. They brought me a bottle of this new dry lubricant called Xtreme Reel Plus. I told Ron that I was going to put that lubricant to the test, so Ron was nice enough to add a few drops of the lubricant to two of the bearings and the results were amazing. I got twice my casting distance as before and the smoothness was immediately noticeable. The product has other applications and is certainly worth looking into; it made a believer out of me.