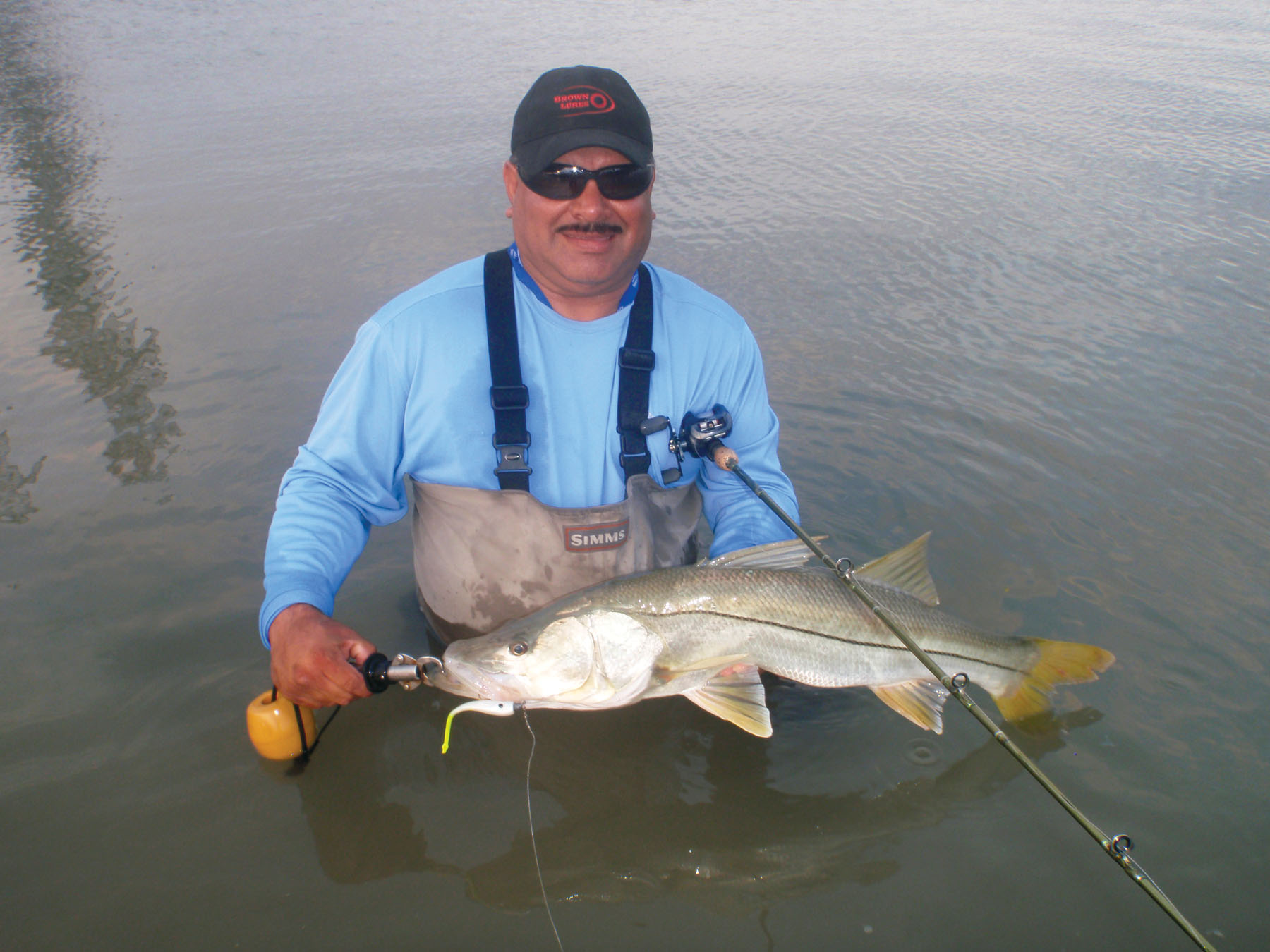 This winter snook took a bite out of a Brown Sea Devil - 33 inches 9 1/2 lbs.
It's hard to believe that another year has passed, and I am happy to report that 2008 left with a bang. Through November and December the fishing was just phenomenal. In November when the winds came to a standstill, finding tailing reds in shallow flats and getting them to bite topwaters was a common occurrence. December was no different during the warming trends before or after periods of cooler weather. The major difference in December was the bigger trout that started to show up on a more consistent basis, and from my personal and recent observations, I have seen bigger trout this winter than I did during the same period last year.

January will bring more frequent cold fronts that don't last very long in South Texas; nevertheless, the short duration of cooler blasts of air do have an effect on fish and the way they pattern. If you read my last two articles, I talked about where you might want to start and things you should look for in the winter months. For the most part those same techniques and areas will continue to hold true in the month of January. Remember to pick your times accordingly. If the morning is really cold but the afternoon promises to be sunny, take a late start and let the water warm up and allow the fish get acclimated.

At the present time fish have been very predictable in their usual winter hangouts. Some of the key points we have been honing on is tidal movement and water temperature. The closer you get to the Brazos Santiago Pass, the stronger the water movement will be. Likewise, in the northern reaches of our bays the flows will be weaker. Taking this information into account we tend to start the day on the southern part of the Laguna and then work our way north to areas where the tide is still having an effect on a particular flat.

Recently, I fished with a group and waded a stretch of water that offered little bait activity. The bite started off slow, but we continued casting hoping it would turn on. I noticed everyone drifting closer to the ICW. I also noticed that the current moving faster as we drew closer to the channel. The fisherman closest to the ICW got into the bite we were looking for and the rest of us followed finding an excellent trout bite. It was just a matter of finding the right conditions, and water movement was the key to our success.

Water temperature is also critical this time of the year. Mud tends to hold the warming energy of the sun and it can be said that muddy bottoms can be your ally when water temperatures plummet. During the days between fronts we are finding big trout lying over soft mud in knee deep water. During the cooler days we tend to move a little deeper concentrating on deep grass lines and pot holes. Dark-colored Sea Devils on 1/8 oz jig heads and Pearl Corky Fat Boys continue to do the trick.

From the catches and observations on the water, I would say the trout population is in a healthy state and they have definitely put on some nice weight. Redfish continue to be found in good numbers and they can easily be spotted this time of the year by the mud boils they create as they are spooked. In between trout and redfish trips we are experiencing some world class snook fishing that would rival most snooky places on this planet. Quality eyewear is necessary to spot all the signs and also to protect your eyes from harsh sunlight. I would like to point out that I have been very pleased with my new Maui Jim's sunglasses in the Maui Rose color. Not only do provide great protection with lightweight frames, they have also been useful in pointing out fishy structure.

In closing, I would like to say a special thanks to all the wonderful people that I've met and fished with in 2008. No doubt fishing has allowed me to meet many great individuals. I expect a banner year in 2009 and also look forward in seeing some old friends and meeting new ones at the Houston Boat Show. Remember to pay attention to the little things because they can make a world of a fishy difference.