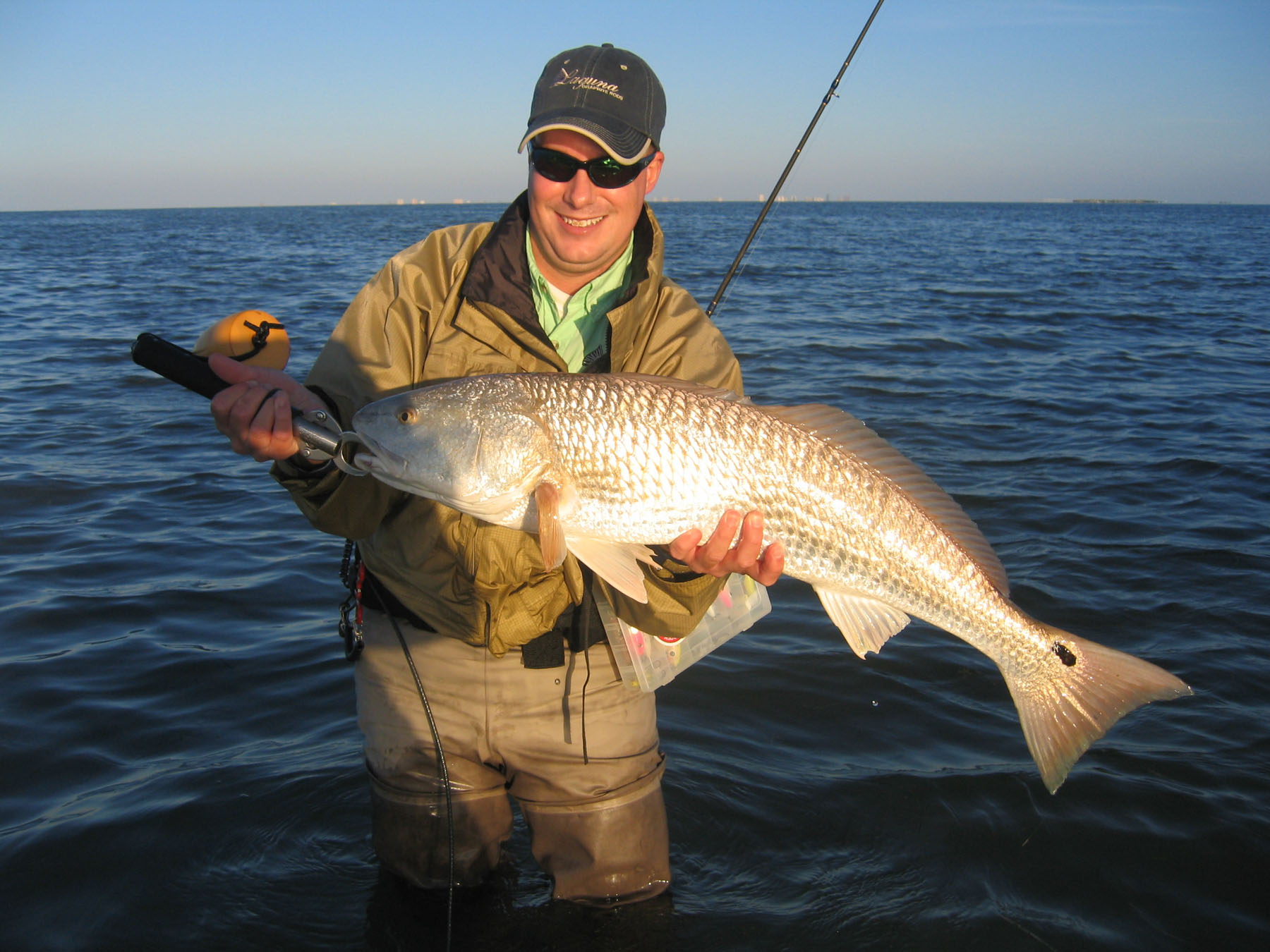 An 8-pound trout and a 13-pound redfish on the same day can keep you smiling for a long time to come.

The spring winds blew just about every day. They were non-stop throughout the months of April and May, most times making it very difficult to find decent water clarity. Many of our usual spring locales would already be blown out upon our morning arrival. These windy months sure brought out the creativity in us and made us step out of our normal routine to find a good bite. There were many days where only long grinding wades produced a decent bite, and on other days long, drawn-out drifts were the ticket to catching a few fish. Working overtime and waiting for the bite to turn on paid off on some occasions. Looking back at my 2006 logbook, April and May provided much better results than we experienced this year.

But now we're headed into June, the beginning of summer. Hopefully June will bring our traditional calmer days and warmer waters. In June and July our tides will begin to recede on average. During the full and new moon periods especially, our bays will begin to reveal their secret fish bowls, depressions, drop-offs, and fishy guts that were not visible before due to the high water levels associated with spring. During the summer, as water levels fall, the fish will concentrate in these slightly deeper holes. If you did your homework during this past winter's extreme low tides when these structures are easy to spot, you may have come across an important key that could lead to some successful and fun fishing trips this summer.

On night's when tides drop extremely low, the fish will congregate and hold in these deeper areas. Baitfish too will be there. The key is getting there before the rising tide begins to scatter the fish. Paying close attention to the direction the bait is moving is critical when trying to stay on fish. As you wade through the mud and sand, look at the movement of stirred up sediments you are creating. The movement of sediment will give you an indication of which direction the current is running. The fish will generally run with these same currents. When you figure it correctly, you will not only be on them at daylight, but you'll be able to stay on them late into the day.

I have used this strategy many times and I can recall making three to four hundred yard wades and finally working our way off the fish. Hopping on the boat to pick everyone up and announcing that we would be repeating the same wade drew puzzled stares from my clients who did not understand it. Fact of the matter is, not all the fish leave those deep zones at the same time, and we surely never caught them all on our first wade through the area. In most cases those unbelieving looks soon turned into smiles as their drags began to scream.

I mentioned earlier that on some recent trips overtime was required. Now overtime is usually a dirty word and I certainly never enjoyed it in any prior occupation. Fishing though is different; I welcome the overtime as an excuse not to have to leave the water. What makes it even sweeter is when your persistence pays off in the end.

On a recent 'overtime' trip with good friend and client Jeff Hellekson, we experienced an impressive bite, but only after having spent nine hours on the water. It was 3:30pm and two trout were our reward for an all-day grind that covered many miles of fishy-looking water. Slightly after 4:00pm we pulled into a cove that had nervous bait skipping on the surface. Jeff and I tied on Super Spook Jr's and began throwing those plugs like we were never going to have sore shoulders the next day.

I drew the first vicious strike of what was to become a remarkable evening bite. She hit my topwater so hard that the surrounding bait scrambled out of the water. She went eight-plus-pounds and was released after a few photos. About my third cast after landing the first one, another sow decides she's ready to eat. She also bulldozed my bait and put on a good fight; she too was released back into her home waters.

By this time Jeff is looking mighty despondent and sees his chances of catching a big trout dwindle. I sent him over where I was and ten minutes later he is on with our third eight-pound trout of the evening. Not long after that one, another trophy is at the end of Jeff's line. Before the evening was over, we landed numerous trout in the five to six-pound class including two that were over eight pounds.

After the trout action came to a halt, the redfish moved in. They were bruisers that put a hurt to our topwaters. This incredible action continued until we called it quits around 7:30 p.m. If we would have called it a day around 3:00pm and used the fishing jargon I have heard so many times before, "Maybe next time," or perhaps, "They just didn't eat today," or everybody's age-old favorite, "That's why they call it fishing," we would have never experienced this unforgettable big fish day. It doesn't always happen this way, but it did on this day. Boy, were we glad we stuck it out!

This summer, learn to use the low tides to your advantage. Find those fishy bowls and you could be in for an awesome day. The winds are certain to subside in June so the days where two drift socks are required will be gone. June is a good month for redfish, and they can be easily enticed with a gold spoon. However, if you're like me, it's hard to put that topwater away. Also, those small four inch Brown Lure devils in pink and white are a good bait to have in your box when the fish desire tails. School is out, but the homework is never ending. Go find some flats that empty all their water overnight and hit deeper holes early in the morning. Who knows; you could score beyond expectations and graduate to the next level.