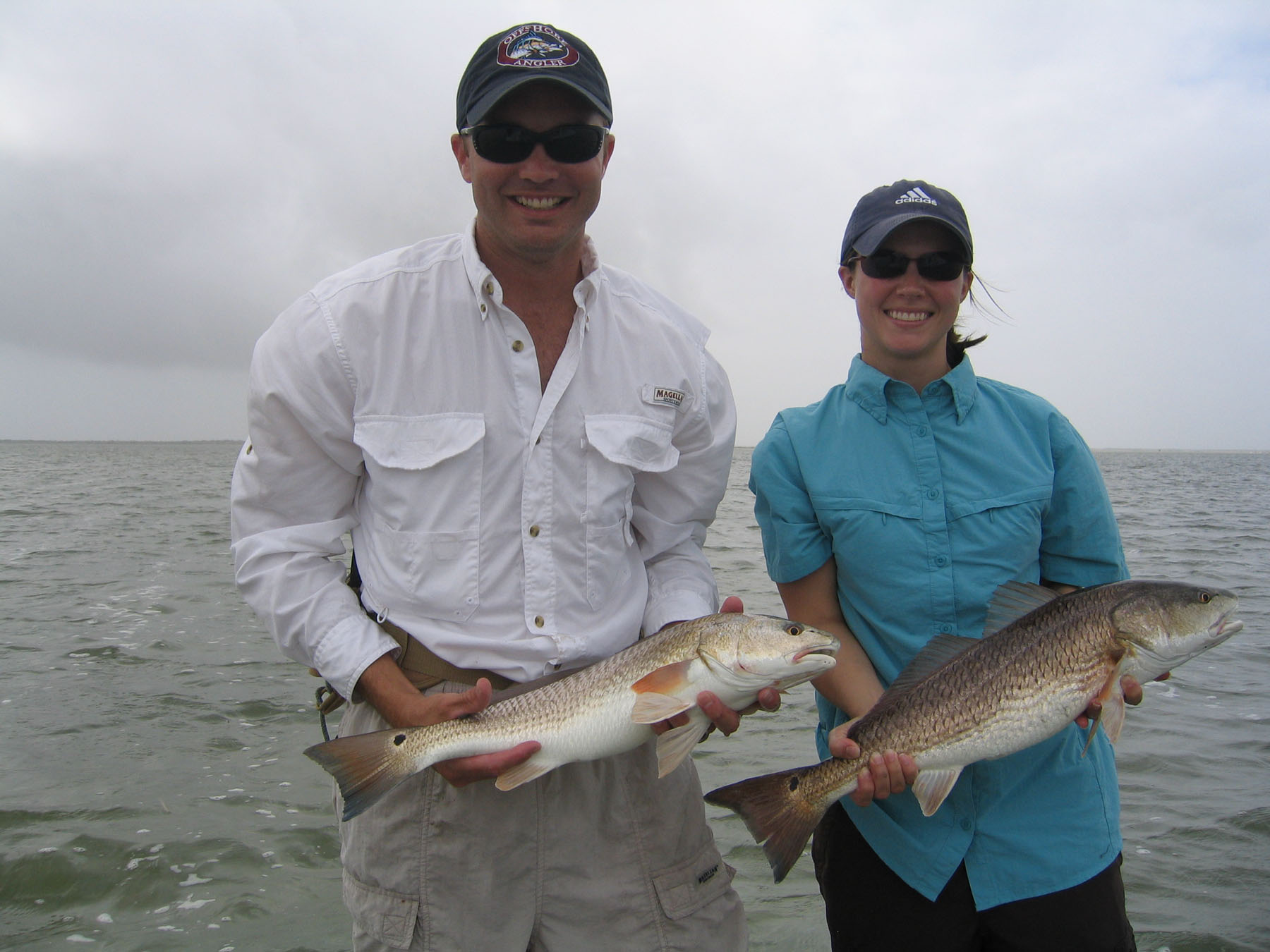 On the water anniversary’s are always fun, especially when the wife catches the bigger fish.
November marks the time to breakout the waders. Hopefully they will still fit and also have bit of room for a couple extra pounds because the holidays are not far off. It's probably a good idea to check ahead of time and not get a surprise on that first chilly morning.

The passing of cold fronts will bring north winds that can churn up the bay water so we'll all be looking for protected places to fish. I like the leeward shoreline of the spoil islands along the ICW and some of the back bays also remain relatively clear during these hard blows. Water clarity is always of great concern but locating baitfish ranks right up there with it. It always pays to note how close to the bank the bait is holding and whether the wind is blowing it toward any particular spot or structure that might also be a natural gamefish attractor.

In November and December I find myself spending a lot of time on the east side of the ICW. The water clarity is generally better here and there are lots of deep potholes where wind-driven schools of baitfish find refuge. Other favorable conditions include highly oxygenated water which always seems to spark lots of feeding activity. The fish are aggressive and fight hard in these conditions. In the spring, summer, and early fall I don't pay much attention to diving pelicans, but starting in November and on into winter the presence of feeding pelicans is a good thing.

November is also the time of year when we need to pay closer attention to the weather forecast; we will begin to see cloudy days during northerners, and with the passing of fronts we'll see blue bird skies and occasional feathery cirrus clouds. Our days are shorter and getting out early is not nearly as important as other seasons. Take an easier start and allow for some warmth to creep into the cool bay waters. The baitfish will tend to get more active as the water temperature rises in the afternoon. As the bait becomes more active and migrates to the flats the gamefish too will be on the prowl.

As mentioned above, an early morning start is not critical. With reduced boat traffic there is less chance somebody will beat you to your spot, especially if you're tightlipped about your honey hole. Don't rule out topwaters, as a matter of fact that is what we will start with most days. As always the weather, water level, bait availability, and water temperature will dictate where we will start. For the most part the fish will continue to be in the same places they were in the early fall. They will migrate to slightly deeper water as cold fronts blast through and then return to feed on the shallow flats and pothole riddled areas. Be vigilant and learn to use the birds to show you the location of the bait. Keep in mind that small channels or guts become favored routes in and out of shallow flats as temperatures rise or fall.

This has certainly been a strange year up and down the coast and we've had our share down here in the lower Laguna Madre. Early fall was tough for consistent catching. The conditions were right many days and the fish were there; however, many times they flat out refused what we were throwing. We worked through some full day grinds and our best catches seemed to come later in the afternoon when the tides moved best.

I fished with a group that comes down every year to fish and shoot birds. We went to a spot that had been producing some very nice reds on topwaters. The early hours were calm, hot and muggy. The bait was all around us and at a distance we could see something busting them up. We headed toward it and the feeding activity was different than I was accustomed to seeing. The bait was jumping franticly like I had never seen before and there were very large wakes streaking behind these frightened mullet. We worked our topwaters feverishly hoping for a brute red to detonate out of nowhere as our bait danced on the water. On one of my luckiest casts ever, I received a huge explosion on my Super Spook Jr. The fish peeled out line as if the drag was no match for its strength. I set the hook and out jumped this big fish at least four feet into the air. It continued to jump again and again. Each time it hit the water a large amount of line was stripped. I saw that it was a tarpon but I could not believe it was in this area. After eight acrobatic leaps my first tarpon came into my grasp. I estimate its weight to be 25 to 30 lbs and close to 4-feet long. Frequently I get to see clients with a case of the adrenaline shakes but it had been a while since I had experienced it. Shortly after landing the magnificent fish, Capt. Mike McBride took some awesome photos and we released it unharmed.

This fish was way out of its normal range. In a million years I would have never thought a tarpon would inhabit a knee deep lagoon. Later that day my client, Jim Straton, would land his personal best trout and a tarpon. What a day that turned out to be and like I told you, it has been a strange year.

November's fishing is a warm-up for what is to come. If fighting hungry and bulky redfish is your game or catching trophy trout with a no-tight-lip-attitude is your preference, then November is the time to be on the water. Don't let the weather stop you from experiencing a good fall and early winter bite. Happy Fishing!