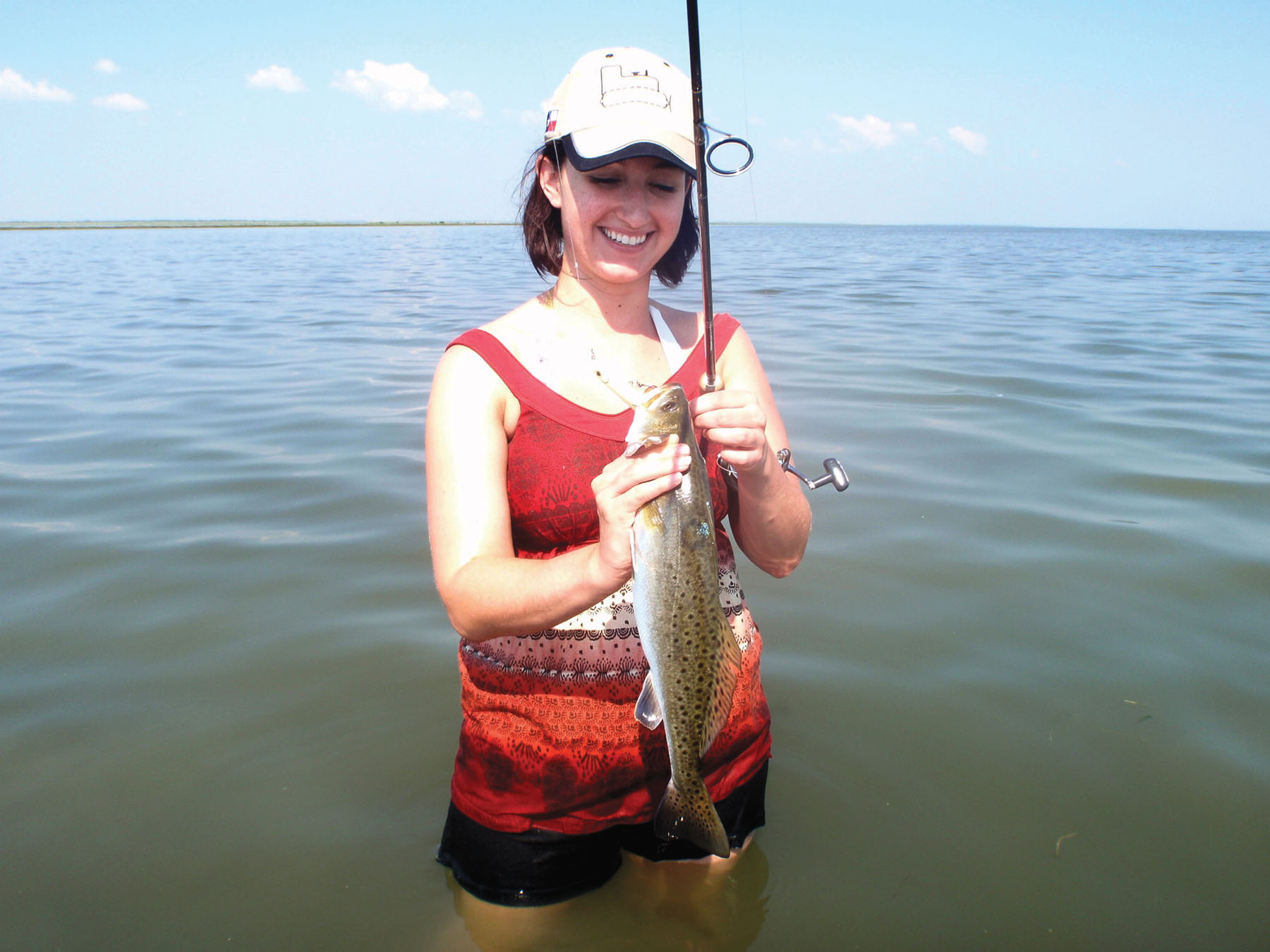 First time wading and her first trout.
Fishing is finally back to normal and the fish are where they should be during the fall period. Through late September and into early October they became much easier to pattern. The evidence of increased fall feeding can be seen as the trout and reds are already adding weight.

Just recently we experienced some of the highest tides we’ve seen in a long while. I took the opportunity to run around and check out some areas that are usually inaccessible during normal tides. Hurricane Ike pushed a lot of water our way and incredibly some of the areas where we caught fish had hoof prints from cattle all over the bottom. In my opinion the surge was a good thing on the Lower Laguna because it mixed all the fresh water we received during Hurricane Dolly and leveled out the salinity in our bay system.

The high water levels made for consistent shoreline fishing. Working a topwater over bait-filled shorelines was a sure way of getting your line stretched. Most days we found ourselves tossing topwaters exclusively. We had very few days where we found big schools of fish but there were lots of scattered singles, doubles, and small groups. Trout action has improved and we have been finding them mixed with the reds. The trout bite is becoming very aggressive, giving us a glimpse of what is to come.

I always look forward to fishing the colder months of the year. The cooler weather brings a significant decrease in boat traffic, fish are easy to pattern and the weather is pleasant enough to fish all day without getting exhausted. November brings to mind last year’s Thanksgiving. We were all sitting at the dinner table at my in-laws house as we do every year. Every member of the family had something to do after lunch. I was the only one left out so I got the bright idea to go fishing. The water temperature was a bit on the cold side from a wintry front two days earlier and certainly not a topwater day. I concentrated on a mud and shell bottom at about three and a half feet, working my Corky along a drop-off. I felt a slight thump and set the hook on what was to be my first legitimate big trout for the winter season. The day ended with a solid trout bite and me releasing a twenty-eight inch trout. The best part was the great things that were to come. It was the beginning of the best winter trout fishing I have ever experienced on the Lower Laguna Madre. A year later and with the new trout regulations already in place, I am excited about the prospects this winter.

What should anglers look for? Starting in November the mornings can be a bit chilly. Sometimes it is good to get a later start, waiting for the sun to warm the flats. I like to take advantage of the early morning stillness to locate concentrations of fish by the number of wakes I observe on the flats. After a few cold blasts redfish and trout will begin to station themselves near drop offs, muddy bottoms, deeper channels and others areas that have quick deep water access. Fish will still frequent their normal shallow water haunts but will migrate in and out of shallow water according to the weather conditions. Unlike the warmer months I start to pay close attention to bird activity, especially the pelicans. The colder it gets the more attention I pay to these diving, fish-finding collaborators. If they can help you locate the bait, chances are the predators will be there too. Mullet activity plays a big role this time of the year. Don’t expect the bay to come alive with active bait at the start of a chilly morning, but as the water warms up, their presence is sure to be seen.

Where should I start? Most of our bigger trout last year came from muddy bottoms; some places were so muddy that wading through it was more than difficult. Shallow flats adjacent to the ICW can be very productive this time of year. If the weather has been on the cold side and then turns warm, look for potholes on the flats to be good producers. During prolonged cold periods finding a muddy flat near a narrow gut can bring heaps of stretched lines. Let me not forget to mention some of my favorite winter places are close to muddy spoil islands.

What should I use? The weather and water conditions along with bait activity will dictate if I go with a surface plug or subsurface bait. If the day is warming up and the bait is active on the surface, I’m more prone to throw a topwater such as the Rapala Skitter Walk or She Dog by MirrOlure. If little or no activity is observed on the surface, my choice is usually a Corky or a Brown Lure Sea Devil. Remember that on colder days the bite can be a subtle peck. Your retrieve will be determined by the water temperature, but normally it’s slower than we use in warmer months. If you miss a fish, don’t hesitate to throw repeatedly to the same spot. In winter fish will tend not to move very far if they move at all. There’s a good chance that fish can still be caught.

Where will you find yourself this Thanksgiving Day? As for me, I will be at the in-laws waiting for everybody to finish their meal and head to the mall or go hunting. My boat will be gassed up and I’ll have one foot already out the door. I know from experience that November brings great fishing and that trout of a lifetime is only one turkey drumstick away. Did I say drumstick? I meant one cast away. Happy Thanksgiving and remember to thank God for all his blessings.