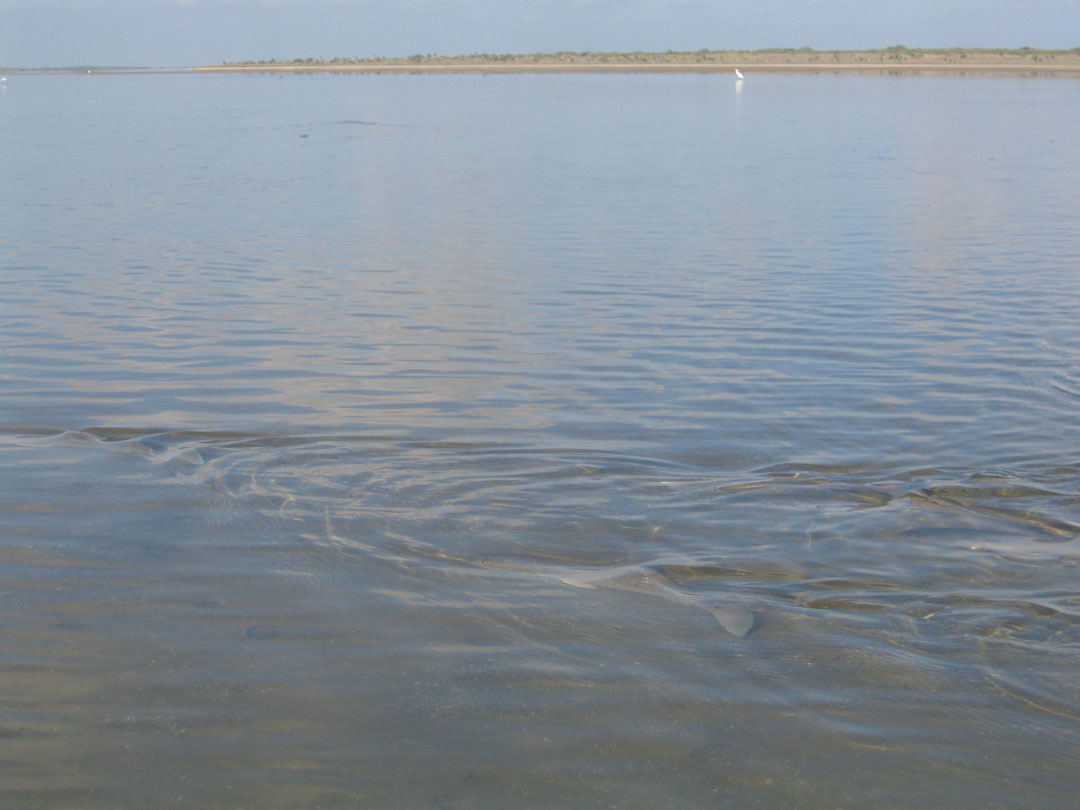 A school of reds swimming along.
Fishing on the Lower Laguna Madre is looking better as each week passes. Hurricane Dolly dumped a ton of freshwater down our way and it has been a chore to find consistent fishing since the latter part of July. During August and the first weeks of September we found our fish populations to be really scattered and extremely hard to pattern day in and day out. Just when you thought you finally found the blueprint to their feeding habits and the GPS numbers for their hangouts, our finned quarry were nowhere to be found upon our return the very next day. There were a few reports of some decent catches during these sluggish weeks, but for the most part the majority of fishermen attempting to wet a line during this freshwater saturated period experienced a grind just to find a few bites. Not only were our fish scattered; the worst part was the silt that had been deposited by the hurricane. Some of our prized flats and pothole regions have received a blanket of fine silt and the historically clear water is easily stirred to a muddy brown.

Some good news is that during the months of August and September the wind finally subsided which allowed us to target tailing reds. The calm mornings brought good opportunities for spotting torpedo redfish wakes on the clear flats east of the ICW. At times the slick conditions had the redfish acting very finicky, and their ability to detect anything unnatural caused them to bolt out of reach. When this was the case we found smaller topwaters a good choice. The gentle splash down and soft presentation definitely brought the most blowups and hookups.

Our trout numbers have been fair to good but the majority have been on the small side. When trout were the preferred species we made our best catches in waist to chest deep water. The darker plastics on a 1/8 oz jigs continue to attract the most strikes. The number of undersize trout paints a bright picture for the future of this species and I believe the same can be said for our redfish population.

October will bring the first cold fronts and cooler water temperatures. Currently water temps have been hovering in the mid-eighties. Even a slight drop in water temperature can trigger more aggressive feeding.

Areas you might want to consider checking out in the month of October are drains and also narrow channels between the spoils along the ICW. Areas such as these are naturally attractive to many species and usually full of bait that is flushed in and out with tidal movements and also anytime the wind is strong enough to push water through the area. Wind direction will determine how you want to set up to fish the narrow channels between spoil humps. I prefer to be downwind of the fish holding structure. While casting into the wind often means tougher casting, your lure will be retrieved with the current and appear more natural moving with the current the way the baitfish do when they get flushed through the channel. You can bet game fish will be waiting there, too. For the last few weeks these drains have produced some nice fish for us.

Another pattern that should be of interest is the outer edges of grasslines. When bait is present, and the water movement is noticeable, grass lines can be good producers in the fall and also in winter. Not all grasslines contain the same bottom structure; some contain sand and shell and some have muddy bottoms. It's the ones with muddy bottoms that have been doing really well for us the last couple of weeks.

Fall is also a great time to find singles and small schools of redfish cruising shorelines with their backs out of the water. Muddy back bays on the west side of the Laguna will be your best bet to target these shallow water bruisers. More often than not a tiny 1/8-oz gold spoon is an offering they find hard to refuse and I strongly recommend keeping one handy when stalking fish on grassy shorelines. Fish like to use grass beds for camouflage and also use them as rest stops and highways to enter and exit the flats.

October always brings some outstanding evening fishing opportunities; the sunsets and skylines at dusk are spectacular and a sight you must experience. Imagine witnessing the sun setting on the horizon and getting into a late evening bite as your rod double ups, line stretching and drag screaming. Isn't that what fall fishing is all about? The sunsets, cooler temperatures, and fish are all waiting.