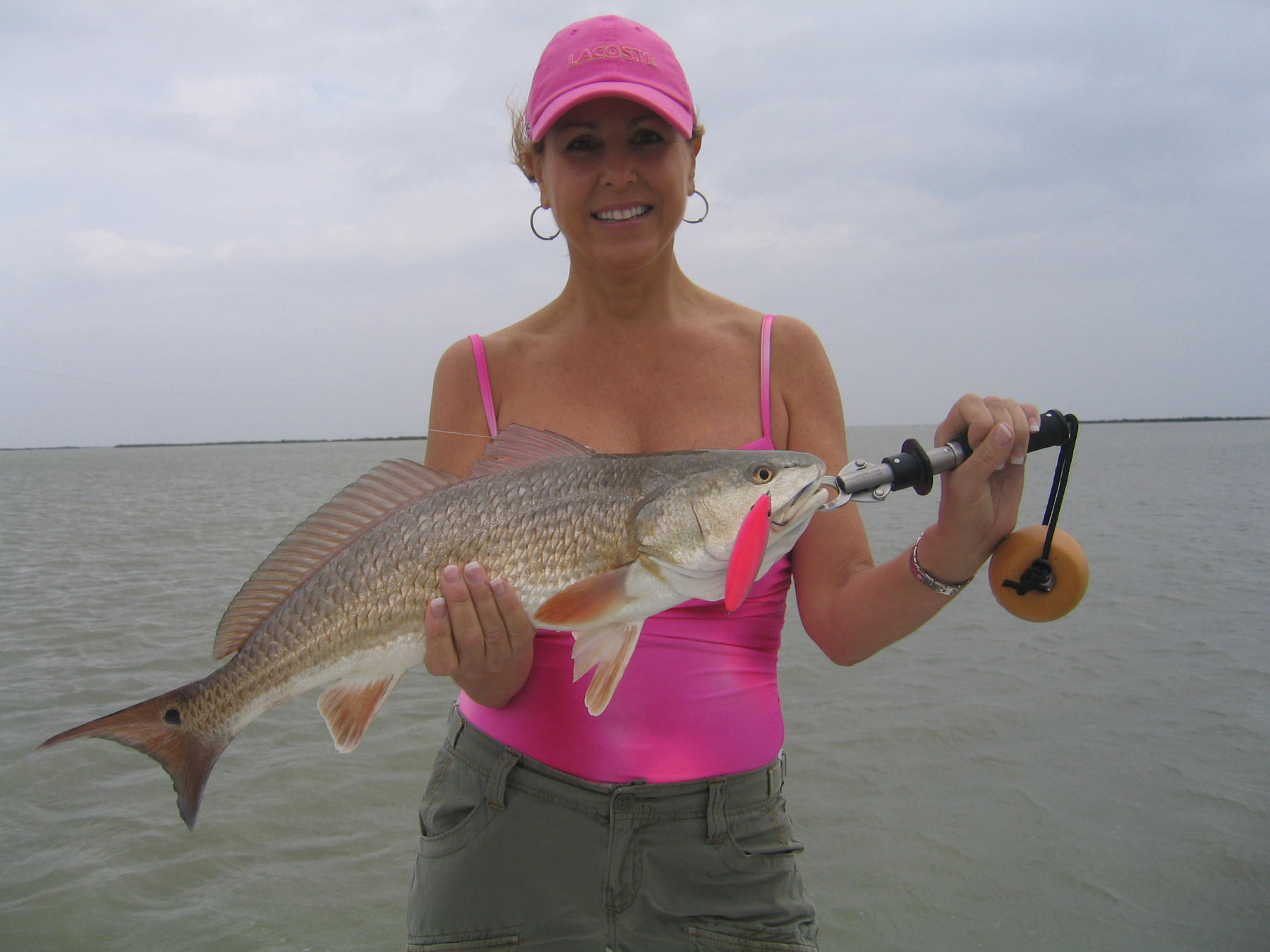 Ofe Mendez and her first topwater redfish. You think reds like pink?
Recently, on a busier than normal weekend, there were boats running everywhere. I heard from a friend that he waited forty-five minutes to launch at the Adolph Thomas County Park in Arroyo City. I don’t know where you launch, but that just doesn’t happen very often in Arroyo City.

I happened to be wading that day with a client in a far-fetched pocket away from all the boat traffic. As we waded in the midst of tailing reds, we could see boats motoring up and down the ICW and adjacent flats. It was then that this article came to mind.

As popular as fishing is these days I’m reminded of a NASCAR event on television. In racing, teams plan their pit stop strategy prior to the start of every race to optimize their chances to win. In fishing it should be no different. For a successful race, a team must take into account how many stops to make and when to make them. With the start of summer the traffic on the water will only become busier. So making the right stops and when to make them will become critical as more boats enter the arena.

Increased boat traffic will certainly change fish migration patterns and also will also have some effect upon their feeding behavior. You need to consider the amount of traffic an area will receive throughout the day. Other considerations are the presence of bait, tide movement and the effect it can have on your area and, as always, how long should you remain in the area before moving on?

Let me give you an example. Recently, we approached an area that looked pretty promising with a strong current sweeping the flat and lots of nervous bait. The area had two sandbars that protected us from all the noisy boat traffic in the nearby channel. Jumping off the boat at seven-thirty in the morning, the three of us spread out and soon got into some redfish action on topwaters. With the amount of bait activity present, we were encouraged and worked meticulously. The morning action was constant as fish positioned themselves in muddy potholes. As noon approached, they continued to hold there and the bite got even better. We could tell the reds were schooled up because at one point every cast was either a hook up or a blow up.

As good as the redfish action was, the trout action was phenomenal with many trout topping five pounds and a couple near eight. By looking at the trout bellies we could tell that they were full of eggs. Considering the muddy, grassy bottom and current from the nearby channel, it appeared that these trout were there to spawn. It turned out that the incredible bite turned off completely by 2:00pm. That’s when we realized that we never took time to eat or do anything else but catch fish for a solid six and a half hours. Early in the morning surface lures worked really well, but as the sun drew high overhead we found that Corky Fat Boys dragged just above the turtle grass was something they couldn’t resist.

My usual fishing strategy for a busy day on the water is to start the morning in isolated places and then move to more open areas as the traffic diminishes. Avoiding the peak traffic of early morning is quite often the key to success. Of course there are other factors such as weather, wind, and water clarity that must be kept in mind.

Presently our better catches are coming from mud and grass bottoms with a good tidal current. Our trout numbers have been better than our redfish numbers lately. Finding bait on the surface has been the key early on. As fish move lower in the water column you will tend to see more swirls and flashes instead of scurrying bait on the surface. This could be a signal to tie on a Brown Lure Devil Eye in a dark color pattern. Lately, the darker color tails have been giving us better results.

It is the time of year that birds begin to work around the redfish gorging on shrimp. A good time to get into some of this action is late afternoon to evening. If the wind is blowing, don’t let that stop you. Wind actually makes things come alive as the birds locate feeding redfish and use the wind to keep aloft as redfish wave their tails above the water’s surface. A weedless spoon is an excellent redfish bait in May. Also, May’s warmer water temperatures bring lots of crustaceans and pin fish to the turtle grass flats. These small creatures use the turtle grass to hide and you can bet the trout and reds will be there too waiting for an easy meal.

Learn to read the water. Be observant of bait activity, check various depths at different times of the day, try different bottom structures, and be sure to check when the tidal currents will be flowing at the greatest speed. Put together a strategy that optimizes fishing opportunity; your pit stops back at the boat should be planned to be take place when the fish are taking a break too. Don’t be afraid to explore; exploring will lead you to new honey holes.

On another note I recently got back from Costa Rica and had a blast. A feature story on that trip will be published in a later issue of TSF Magazine. On my trip I was able to field test a Shimano 100Mg Core to the max and was totally impressed with the reel’s performance. The low profile and scant 6.1 oz made it easy to cast and it fit perfectly in my hand. I really liked the click drag adjustment that let you know how much tension was being applied. The tapered levelwind insert made it easy to thread line from the inside out. The gear system out performed any other reel I own. It’s a little pricey, but you get what you pay for.

Enjoy your fishing in May and remember that unlike the NASCAR guys, with a little planning, a fisherman can always reach the checkered flag.