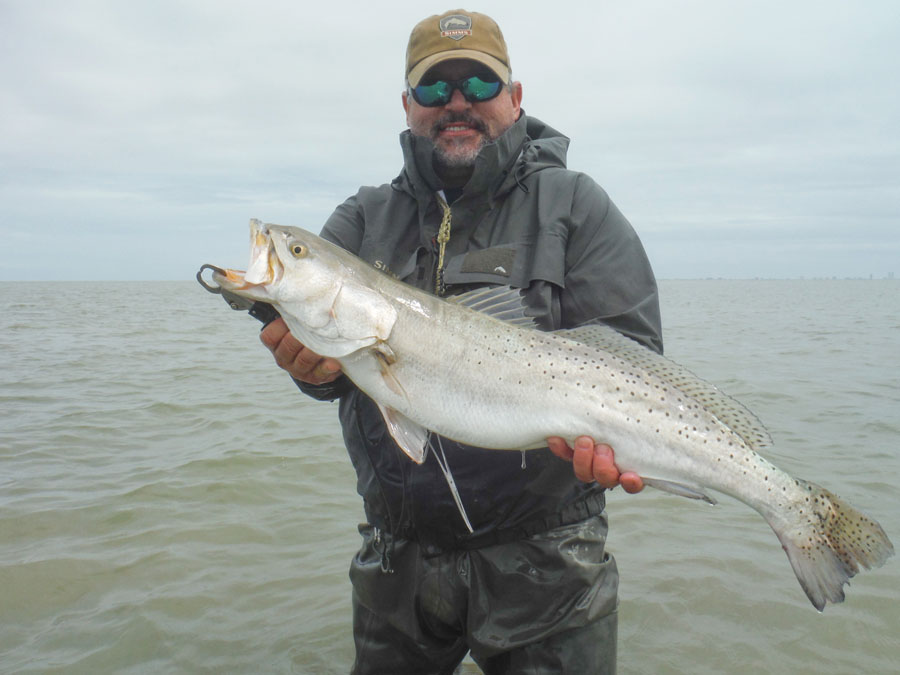 Dave's personal best 31 inches 9 1/4 lbs.
A few weeks back I represented JL Marine Systems/Power-Pole at the Bass Pro Shops Spring Fishing Classic in Harlingen. The warm welcome from all the Bass Pro staff and the visitors to the event made it very enjoyable for me. To all the people I met and friends who stopped by, I want to say a hearty, "Thank You." Your kind words and well-wishes confirm that I have the best job in the world.

In my last article I reported that we were seeing lots of big trout on the flats but having difficulty getting them to bite–no matter what we threw. All I can say is what a difference a couple of weeks can make.

Like the proverbial light switch; they have turned on–big time. And we haven't needed to throw the kitchen sink to catch them. Right now, a weedless K-Wiggler Ball Tail Shad twitched close to bottom over turtle grass and along the edges of potholes is as deadly as dynamite. I can only pray that it continues as so many of my clients have been scoring personal best fish–multiple times per angler on some charters. One wade alone produced three "over 30s" last weekend, along with a bunch of solid 6 to 7-1/2 pounders.

March has been a cold and rainy month so far but, as we get closer to April I expect that will change. The northers will be much fewer and farther between, which will be a nice change, but April's southerly winds can be some of the strongest of the year–25 mph by midday and early afternoon is usually the average. This can be a challenge but you just cannot let a little off-colored water spoil your day when you know the fish are there. They have to eat just the same and water color is always a bigger problem for fishermen than for fish.

My first choice in dirty water is usually a paddle-tail bait due to the thump and vibration the tail creates. Fish can sense this and they will definitely zero in on it, even when they cannot see it. Another option might be adding scent, especially if it gives you greater confidence when the water turns murky.

Throwing a topwater like the MirrOlure She-Dog with its high-pitched rattle is another solid choice in stained to murky water. Though we haven't had much topwater action yet, that will change as the water warms and fish feed more aggressively. April is the month when mature trout hit their heaviest weights, full of ripening roe, plus still being winter-fat for the most part.

Known peak periods to catch these sly monsters will be around the days preceding the new and full moon. Tidal flows are consistently strong at these times and the biologists tell us spawning reaches peaks when the currents reach their greatest strength on two tide days. Many fishermen, and even some hardcores, shy away from full moon fishing believing the bite is too unpredictable. I agree with this to a point, but I have also seen some exceptional specimens landed over the years during late-afternoon and evening hours as that full moon is rising. Being shy of the full moon is one thing, but never be shy about waiting for them to turn on.

Our redfish population looks to be in good shape as we are catching lots of little ones. Not only are there lots of little ones, but also good numbers of wide-shouldered brutes that amaze me how shallow and stealthy they can lay in mere inches of water. Our best catches have been made in less than knee-deep lately and they seem to prefer pink. Flo-Mingo K-Wigglers have been the go-to plastic and small topwaters have been effective after a three- to four day warming period.

During April, backwater areas that were too shallow on winter tides will come into play. Back bays such as Payton's Bay and flats near the Arroyo Colorado should offer excellent chances for solid redfish action.

Last month I credited my sponsors for much of the success I enjoy and just recently I received one of Castaway Rods' Invicta series, the INV-MLC67F to be exact. I have used many rods over the years but this one is exceptional in my opinion. It is super light with great sensitivity, and has plenty of backbone. The Winn-Grip makes it very comfortable on the hands, and it looks great too. So far it has handled soft plastics, Corkys and medium topwaters equally well. And, I have landed some great fish. Checkout their web site www.castawayrods.com.