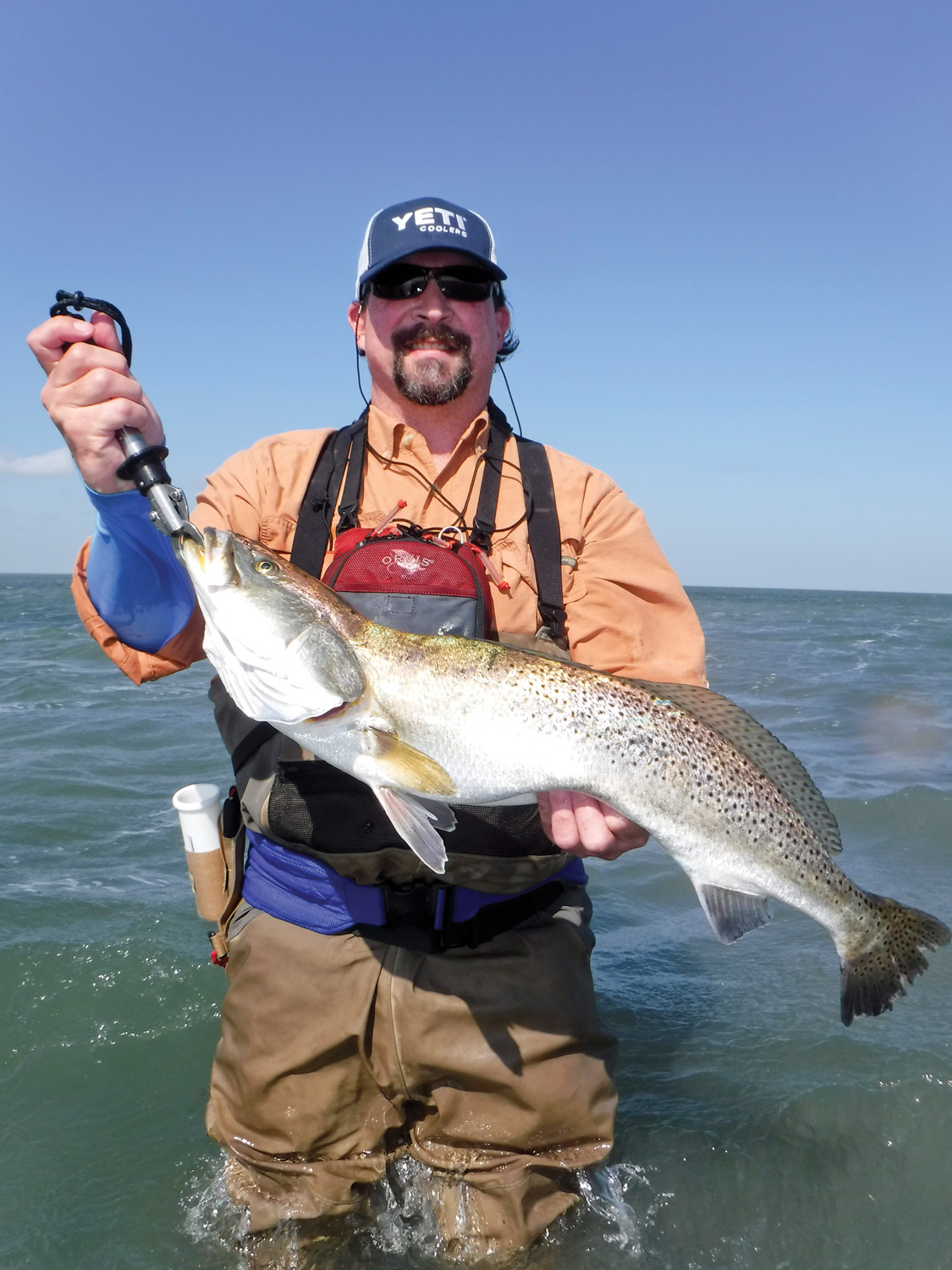 When I think of April, I think of change. With the mild winter, and everything changing so fast, spring-like weather in February and all, I am wary of trying to predict what the fishing patterns might be in a few days let alone a few weeks. Believe it or not we have actually been able to target redfish under birds on several occasions already.

One thing I am 100% sure of though, April can be the absolute best month of the year for heavyweight trout. Still winter-fat and now filling with developing eggs, if you rate trout by weight more than length, April should be your favorite month.

The possibility of heavy fish aside, April is not my favorite fishing month. When I was a kid I loved kites and you need lots of wind for kites. In my neighborhood, April was the best kite-flying month. That might tell you why it is not my favorite month to fish. Too many days we find ourselves taking what we can get and not fishing where we need to be.

Enough doom and gloom. What can we do to deal with the wind? First you need to concentrate on leeward AND windward shorelines. Windward at daybreak and then leeward when the wind comes up. Next you need to look for baitfish and be observant of wind-generated currents along shorelines and spoils. Third, even if early starts are not your favorite, you need to headed out at first safe light to beat the wind. Finally, consider using paddletail soft baits for the tail vibration that attracts fish in poor clarity conditions. K-Wigglers’ new Willow Tail Shad is a good one. Ditto noisy, high-pitched topwaters.

Lately, redfish have been available along the sand-grass transition on the Eastside. We have also found them loafing in Westside potholes. A striking pattern in finding them has been mud trails left behind as they scatter when spooked. Many have had tiny shrimp in their stomachs. It goes to show you how mild our winter was. A more consistent topwater bite has developed but plastics are still the steadiest producers.

With minimal boat traffic in the shallow back bays, redfish can be found calmly prowling the shorelines recently inundated by higher tides. Nervous or scattering baitfish have been good clues. Beginning in April we will see increased bird activity in the evenings. Keen-eyed gulls hover above pods and schools of reds as they feed, rarely missing a shrimp that breaks the surface. Small topwaters really come into their own when this develops.

Trophy trout season is certainly not over; however, the winter part of it was a bit disappointing. The numbers of seven and eight-pounders were far fewer than years past. Our best fish this year were a little over seven. Larger fish have shown sporadically on the flats but never consistently. Colder, low tide days were best, but as soon as the weather warmed they scattered to the point of not being targetable. I have no reason to doubt they are still here, we just needed more cold weather to concentrate them.

Trout spawning kicks off in earnest during April and peaks around new and full moon phases with the stronger tides. For clients willing to put in overtime, the adventures will begin at dawn and end at dusk to better our chances. Spawning females feed aggressively and topwater baits work well. If you find them only willing to blow up on larger plugs, never overlook smaller offerings such as the Zara Puppy, especially in calm conditions. You can bet I will be throwing that new K-Wiggler Willow Tail hoping for that thump, hookset and head-shaking that follows.

With the early warmup, some anglers have already shed their Simms waders. This typically does not happen until the second or third week of April, but as I have been saying, everything seems to be advanced about three to four weeks this spring. As we enter the spring and summer seasons, our fishing apparel changes. I suggest a visit to Fishing Tackle Unlimited and check out their Simms and AFTCO collections. I must say that being comfortable all day on the water makes you fish longer and harder.

Lastly, I'm excited because Fishing Tackle Unlimited’s new rod will finally be available this month. If your preferences run like mine, a fast and sensitive tip section that blends into a high backbone to muscle strong fish, I believe you will like this one. And a bonus feature, the new FTU rod is made in the USA.

I trust your April fishing quests will all be successful and filled with great adventure.