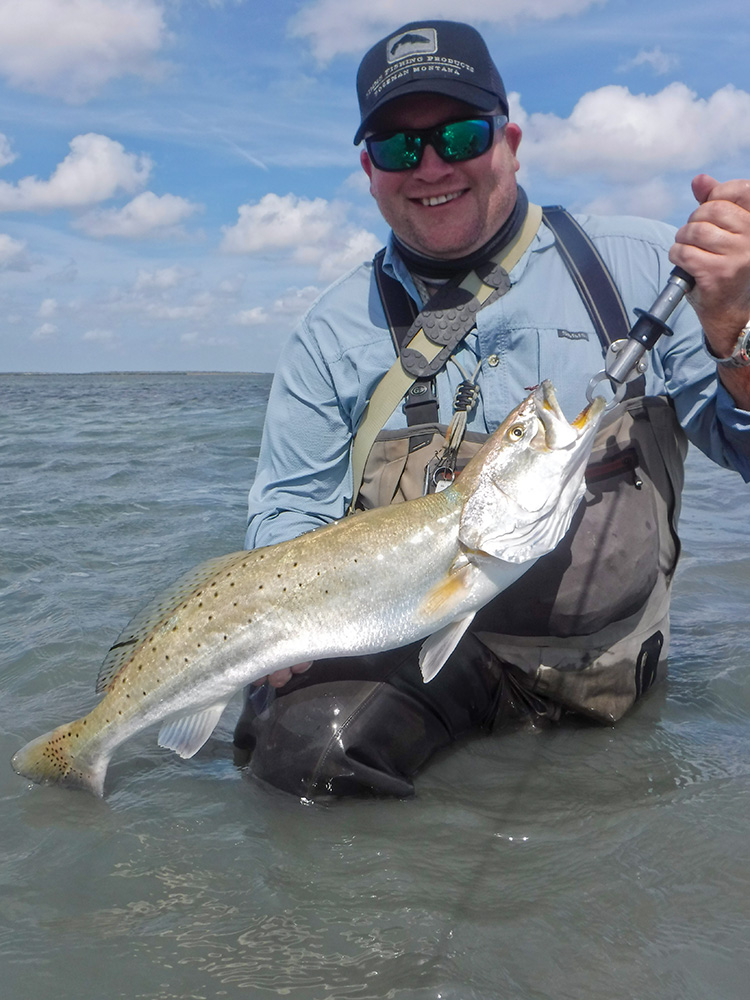 Cory Johnson pulled this sleek 8-pounder from water less than a foot deep.

The six-week period of late-March through April is when trophy trout attain their heaviest weights of the year. Large female trout will be full of eggs prior to spawning and, if they just happen to have swallowed a sizeable mullet, between the roe and their recent meal they could easily be packing an extra pound or two more than normal.

Understanding spawning behavior can be useful in directing angling effort toward target-rich areas. Springtime brings increasing hours of daylight, which triggers the whole spawning process. Water conditions and habitat define where it will most likely take place.

Biologists say Laguna Madre trout spawn primarily over submerged seagrass beds when the water temperature reaches 70⁰ to 80⁰ and the ideal salinity for spawning is within the range of 18- to 25-parts per thousand. New and full moon periods provide optimal current flow for mixing eggs with milt and transporting fertilized eggs deep into the estuary, where larvae and fry thrive in rich backwaters.

Beginning in April, I don't mind fishing late into the evening. Many anglers shy away from a full moon, but during spring I find the increased tidal flows and the light of the bright moon very helpful. Plus – I’m fishing during dusk when much of the spawning activity occurs.

Position yourself on a grass flat with potholes that also has good tidal flow. Focus on the solunar feed periods in the days leading into new and full moon. Add a dab of luck and you just might land a career-best trout.

Fishermen often complain about catching lots of small male fish that croak when taking them off the hook. But, I do not see it as a negative during spawning season. It tells me there are probably large spawning females present as well. Be patient!

We are currently either seeing or catching trout over twenty-five inches on every outing. During a recent four-day stretch, we landed twenty-nine trout between five and eight pounds, along with many other keeper-size fish.

I had been around this school of trout more than two months but never succeeded in getting them to eat very well. Finally, the tide came up, the wind started to blow, and we have been getting them to take soft plastics over potholes. The wind has added some color to water that had been almost too clear and the new moon triggered more aggressive feeding.

KWiggler’s Willow Tail in the Turtle Grass color pattern (brand new) has made a believer out of me. Fish that spooked or refused other colors in clear water are absolutely eating it up. The results speak for themselves.

Redfish seem to be plentiful and very healthy. We are currently finding them in most places we fish – from murky to bathtub clear. We are keying mostly on active mullet and the best numbers have been coming from knee to thigh deep water. Small topwaters have been catching a few but the majority have come on the KWiggler Ball Tail Shad in Mansfield Margarita. The Willow Tail Shad in Texas Roach has been a good producer in off-colored water. Do not let the murky water put you off, just switch to darker lure that produces a bit of vibration.

Keep in mind that we will soon begin seeing lots of shrimp in the shallows. On windier days, especially in late-afternoon, look for redfish schools to be tailing under flocks of seagulls. Let me tell you, the windier and muddier the better and easier it gets.

Incidental flounder landings have increased considerably in recent weeks, which is very encouraging considering that last year was slower than the recent average. I do not consider myself a good flounder fisherman, but I do know that working drop-offs and channels with a lot of patience is usually required. If taking one home for dinner is a priority, I heartily suggest carrying a landing net when you wade.

In closing, I am happy to announce that we have recently concluded our second full year since implementing the Empty Stringers Catch and Release Program. I am proud to be associated with a great bunch of clients that believe in catch and release to help create a better fishery for tomorrow.

I want also to give a hearty thanks to all the sponsors that share this conservation ethic and have jumped onboard to support Empty Stringers. Texas Saltwater Fishing Magazine, Simms Fishing, Costa Del Mar, AFTCO, Fishing Tackle Unlimited, Yeti, The Sportsman, K-Wiggler Lures, Power Pole, Shallow Sport Boats, and 13-Fishing.

Practice CPR and help make our fisheries even better.