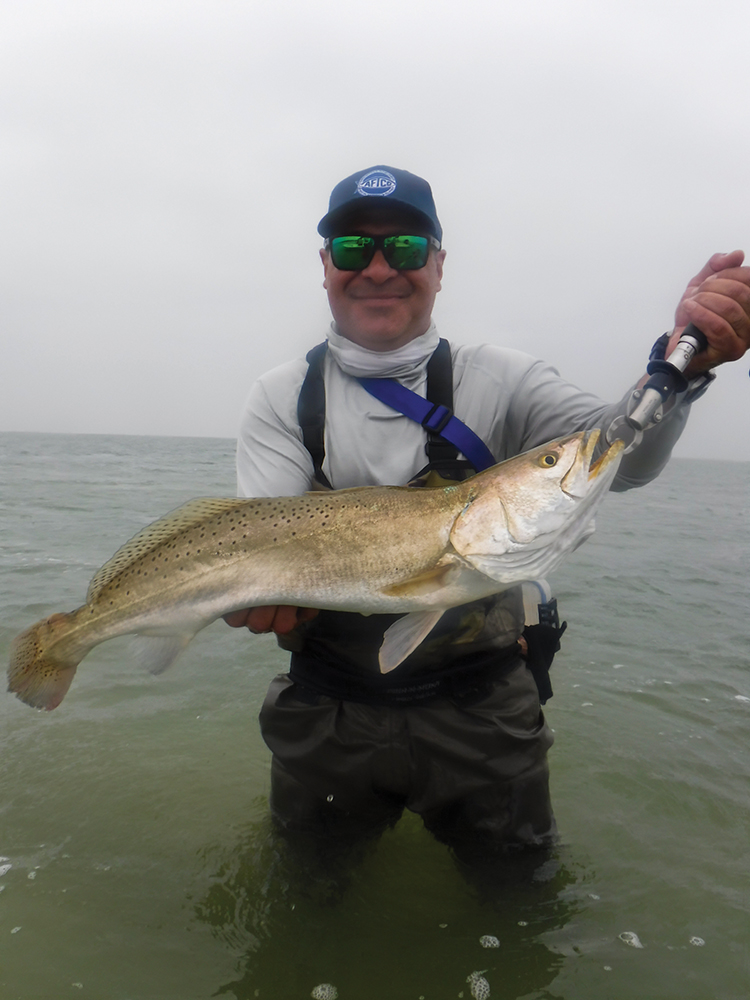 Joey Jimenez with one of the two solid trout he caught back to back recently. CPR!

If you thought March was windy, hold onto your hat. April brings more favorable weather in general but strong wind will continue to dominate the daily forecast. If you were attentive in March as to which areas remained fishable with decent water clarity when the wind was whipping, I would say you are ahead of the game heading into April. If you enjoy drift fishing you might want to invest in a second drift sock; you’ll probably need it. While we cannot control the wind there are times when we can use it to our advantage.

We had been on a decent bite recently in a relatively small area and I took note that they would only hold there when the wind was light to moderate. Several times we tried in windier conditions but the fish seemed to have disappeared. It finally dawned on me that the wind might have pushed the bait to the nearby windward shoreline and the fish had likely followed the bait. A visit to that windward shoreline proved that my guess was accurate and we found both bait and fish stacked there. Keep this in mind when the wind blows in April and think of other areas where this tactic can be put to good use.

Fish will be more mobile in April than during winter as water temperatures will be rising and tides will be running higher and stronger. Add persistently high wind to the equation and when you think you got them figured out, you’ll probably find out they’ve moved. Does wind play a significant role in April? Absolutely!

As the water continues to warm through the month of April we will see more frequent and more aggressive feeding taking place. This will become very noticeable during daily predicted solunar feeding periods and especially during late afternoon and evening hours as a full moon is rising, several days prior to the actual event of the full moon and a couple of days following.

April also marks the return of the floating seagrass problem here on the Lower Laguna. On the windiest of days the water column will be filled with grass uprooted by wind-generated current from top to bottom, with row after row of floating grass spread across the surface. It can be very frustrating trying to fish in these conditions.

The best ways I have found to deal with this grass problem are to swap the trebles on your surface and slow-sinking lures for single hooks and switching to weedless rigging on your soft plastics. An excellent choice in the soft plastic department is the KWigglers Willow Tail Shad on their new Willow Maker Weedless Jigs. The Willow Maker jighead has a moveable weight molded to the shank that can be positioned forward to create a vertical diving action or slid rearward to produce a flatter, more horizontal descent through the water column.

Last month I mentioned that our landings of larger trout had slowed significantly from the great start we experienced in early winter. Luckily, that tide has turned and we have been doing much better recently. We are now regularly seeing concentrations of larger trout on the flats and our landings have also improved considerably. I am encouraged that this bite will only get better as the spring spawning activity triggers the need to feed more regularly. Prime locations for finding larger trout will be sandy potholes in areas of solid grass bottom and also edges of shallow grassbeds adjacent to mostly sandy bottom.

Redfish action has also improved. We are entering a period when shrimp grow rapidly and become a major part of the redfish diet. One of the keys to finding reds of late has been locating muddy patches of water where the reds have been rooting bottom as they feed on the small shrimp. Gulls hovering above these muddy patches of water are another solid clue. Quite often on windy afternoons we see large areas of water becoming muddy due to the wind, which makes a single fish or a pod of redfish rooting bottom impossible to spot. Just follow the gulls working above that muddy water and get a gold spoon or topwater under them as quickly as you can.

Here’s my best advice for April fishing success. Keep your eye on the weather forecast, especially the wind. Study the tide and solunar tables to position yourself in potentially productive areas at prime feeding times. Fish will be on the move so be patient and read all the signs above and below the surface as you search for them.